Commander of the Izz ad-Din al-Qassam Brigades Mohammed al-Deif is responsible for some of the most murderous terror attacks against Israelis, yet during the Gaza war the IDF failed again to eliminate him. 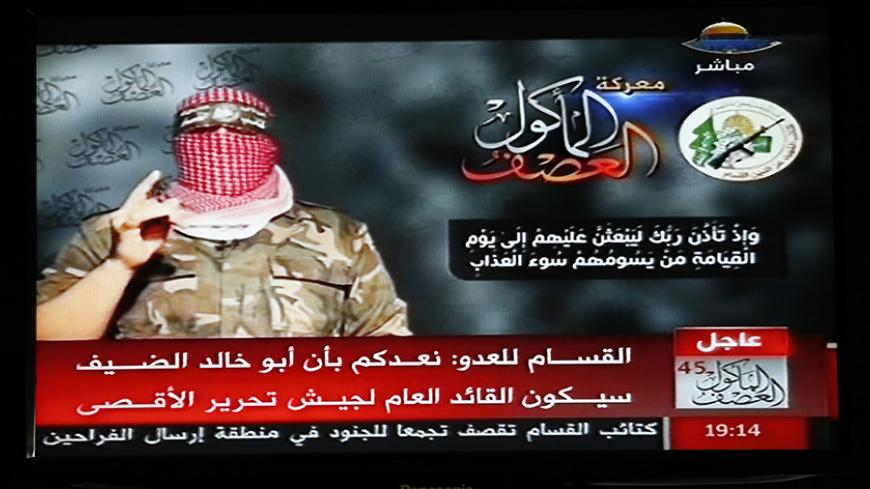 In the battle waged over the narrative of Operation Protective Edge (July-August 2014), in which both sides declared victory, it appears that the Palestinians have scored a significant achievement: Mohammed al-Deif, the Hamas chief of staff and No. 1 on Israel's "most wanted list" who has survived numerous assassination attempts, has survived this time as well. It is clear; no more question marks; the uncertainty has disappeared: Deif is alive.

Although it is not exactly known what condition he is in, it is clear that he survived the assault on Aug. 19, 2014, in the midst of the military campaign. During the campaign Israel was notified about a house where Deif was residing at the time, and an air force fighter plane struck the house with numerous powerful bombs, each of which weighing a single ton (2,000 pounds). "He'll never get out of there alive," senior Israeli security officials said at the time. But it seems they erred; Deif did, indeed, escape with his life.

Deif survived at least five Israeli liquidation attempts between 2001 and 2014; four of those were targeted killings from the air that were based on precise intelligence. He was wounded a first time (losing an eye and part of his arm) and severely wounded a second time (losing additional limbs). Deif became handicapped, paralyzed and in need of long periods of rehabilitation. Yet in the meantime, he became one of the most deadly generators of terrorism in Israel's history. Israeli intelligence invested tremendous resources and energy in the effort to pinpoint and eliminate him. The intelligence was exact, but somehow Deif managed to elude all attempts on his life. He was severely wounded, but lived. He was neutralized many times for long periods of rehab, but always returned.

In the Protective Edge campaign, Israel desperately needed a victory photo op. For 50 days and nights, Hamas imposed a rocket-fire siege on the entire country. Rockets were launched at Tel Aviv on a daily basis (though the city was not struck due to the Iron Dome air defense system). The Benjamin Netanyahu government decided not to go for conquest of Gaza in its desire to spare the lives of Israel Defense Forces (IDF) soldiers and Gaza residents. Everyone understood the fact that Hamas would survive this campaign while still on its feet — even if those feet were very unsteady — would be interpreted as an unambiguous Hamas victory. The only thing that could change this equation was to "bring in Mohammed al-Deif."

In the course of the military campaign, Defense Minister Moshe (Bogie) Ya'alon rebuked Shin Bet chief Yoram Cohen several times. Ya'alon felt that the Shin Bet was not supplying enough intelligence on the precise locations of Hamas officials, including Deif, thus not allowing Israel to create victory photo ops. The Shin Bet redoubled its efforts and delivered the goods in the middle of August 2014.

On Aug. 19, an Israeli air force warplane dropped a bomb weighing 1 ton on the house in which Deif was supposed to be located at that exact time, according to precise information. After less than a minute an additional bomb was dropped on the building, for good measure. To this very day, Israeli sources swear that Deif entered the building where he was supposed to meet one of his wives with two of their small children. The wife and children were discovered among the house's ruins, but there was no trace of Deif.

Since then, Israel has remained circumspect on the topic, and IDF officials expressed themselves guardedly on the issue. In background talks, it was elucidated to anyone who expressed interest that the powers that be were absolutely certain that Deif did enter the building. Thus, it was hard to imagine he came out of it alive, as the building was completely destroyed. In the past, Deif managed to slip away from a building that was blown up only because the IDF had decided to use a smaller bomb (only 250 kilograms, or 551 pounds) after the harsh fallout of the assassination of Hamas official Salah Shehada in 2002, in which scores of uninvolved Palestinian bystanders were harmed. As their luck would have it, Deif and a large group of Hamas officials held their meeting on the second floor and not on the first floor of the building that was bombed; thus, all of them managed to escape almost unharmed.

This time, Israel decided not to leave anything to chance. Two powerful bombs were dropped that were supposed to put an end to the saga and myth that had developed around Deif.

Indeed, the myth and Deif are both alive and well. In Israel, Deif is considered ''a mortal target.'' He is responsible for the most deadly of terrorist attacks in which hundreds of civilians were murdered. He is viewed as the spiritual father of the tunnel doctrine, the construction of underground spaces that would give Hamas an advantage over the trained and well-equipped IDF. Deif understood, in recent years, that Hamas could not defeat IDF or fight against it in the air, at sea or on land. Hamas has no airplanes, no ships, no tanks and no armored personnel carriers. So Deif invented the tunnels, which the IDF found difficult to fight against. Deif's death was supposed to grant Israel's diplomatic and military echelons a victory photo. Now, they will be forced to look for a different photo op.