Hamas was caught off guard by Israel’s killing of three Izz ad-Din al-Qassam Brigades leaders and has responded by executing people it says assisted Israel in locating targets. 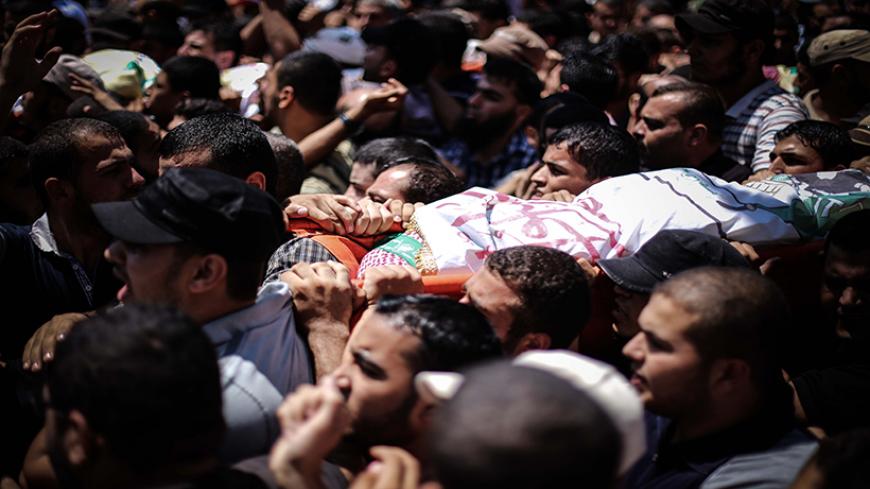 RAFAH, Gaza Strip — Forty-six days after the July 8 start of the war on Gaza, Israel succeeded in assassinating three leaders of the Izz ad-Din al-Qassam Brigades, Hamas' military wing, prompting Hamas to execute 18 people it accused of spying for Israel. The Aug. 21 attack appears to have caught the organization off guard and has raised speculation of a possible lapse in security precautions that enabled Israel to successfully carry out the attack.

On Aug. 22, Hamas publicly executed the alleged spies working for Israel and issued an explanatory statement, “The revolutionary court’s decision to execute the death sentence of several spies.” The Majd website, which is close to Hamas, said that the collaborators' confessions included details of their actions, among them “following and monitoring leaderships, finding targets to hit the resistance — such as rocket launching pads and tunnels — and monitoring the movements of leaders, which resulted in their martyrdom.”

A source from Gaza's Ministry of Interior told Al-Monitor, “Some of the spies who were executed gave away important information about the resistance, which led to the assassination of some figures.” The source said that their public execution in a time of war should deter other spies still working in the field, especially given that leaders are being assassinated by Israel.

The source also clarified that every spy who provided information to Israel leading to the assassination and killing of innocent people — whether directly or indirectly — will be sentenced to death, adding, “In some cases, the occupation asks a group of spies to monitor a specific person and his car. Sometimes, the spy coincidentally obtains information during his normal day and gives it away to the occupation.” The source said that the Ministry of Interior had nothing to do with the executions.

On Aug. 21, Al-Monitor visited the bomb site where the three Qassam Brigades leaders died at 2:35 a.m. The airstrike in the Tel al-Sultan area of Rafah targeted a building owned by Abu Hussein Kallab, reducing it to rubble and also killing seven neighbors in homes made inhabitable by the attack.

The destroyed home of the Kallab family, where three Qassam Brigades leaders were assassinated by Israel, in Rafah, Aug. 21, 2014 (photo by Motaz al-Aaraj)

An eyewitness, Fadi Abu Arab told Al-Monitor, “We found a baby girl alive and removed rocks from her mouth. We didn’t know that there were [Qassam Brigades] leaders here until after daybreak. Four floors collapsed over their heads.” He said that the aircraft fired eight rockets, two at a time, and then a ninth missile, which did not explode.

Ahmad Kallab, another eyewitness and a relative of the owner of the targeted house, said, “We found the bodies of the leaders in the staircase, near the entrance,” pointing to what used to be the building's entrance. According to Kallab, the men had just entered the house when the missiles hit them. Some said they had just arrived for a meeting.

People from the neighborhood described the house’s owner, Abu Hussein Kallab, as an average man who is not politically active. He is a trader and owns a brick factory, which Israel destroyed during the war along with a number of others.

Speculation spread among Arab media that Israel’s Aug. 19 attempt to assassinate Mohammed al-Deif, Hamas' military chief, had stemmed from monitoring a phone call Deif allegedly made from Gaza to Hamas leader Khaled Meshaal in Doha. A Hamas security source told Al-Monitor that such a scenario was impossible, because Hamas leaders do not use regular communications networks, and its leaders do not carry mobile phones in times of war. The organization has its own private communications network that is hard to breach.

The security source added, “The leaders are also prohibited from using the Internet and social media networks. Communication is done through basic means, such as using the human element.”

The assassination attempt raised rumors that Hamas had eased up on security precautions for its key personnel during a cease-fire, allowing Israel to easily locate assassination targets. Security affairs expert Alaa al-Rimawi believes that the attempted hit on Deif and the assassination of the three leaders followed new arrangements in the field during a truce that led to the leaders moving around, thus allowing Israeli spies to collect information, in addition to monitoring through technology, satellites and drones with facial recognition capabilities.

Rimawi further theorized, “If there was a direct intelligence breakthrough on the Qassam Brigades leaders, then Israel would [have assassinated them earlier].” Rimawi, who lives in Ramallah, does not believe that the three leaders being in one place was a security mistake per se, justifying it by saying, “They should have remained separated, but they know how to run the battle and they needed this meeting, which seems to have been strategic, especially after the spokesman of the Qassam Brigades, Abu Ubaida, delivered a speech asking them to tightly manage operations. Throughout the war, the Qassam Brigades distinguished itself by not fighting like a populist movement, but like an army, which surprised the occupation with its level of military development. So [the Qassam Brigades] would not have committed such a simple mistake.”

He concluded, “Throughout the war, Rafah was a fundamental pillar of the resistance. So [Israeli] intelligence is greatly focusing on it.” Rimawi said that Israel makes large financial offers to members of leaders’ circles, be they relatives or guards, to obtain information on wanted senior leaders.