Did an Israeli drone strike militants in Egypt?

Eyewitnesses say an Israeli drone struck Egyptian militants in the Sinai Peninsula on July 23, despite Egypt’s official assertions that it was responsible for the strike. 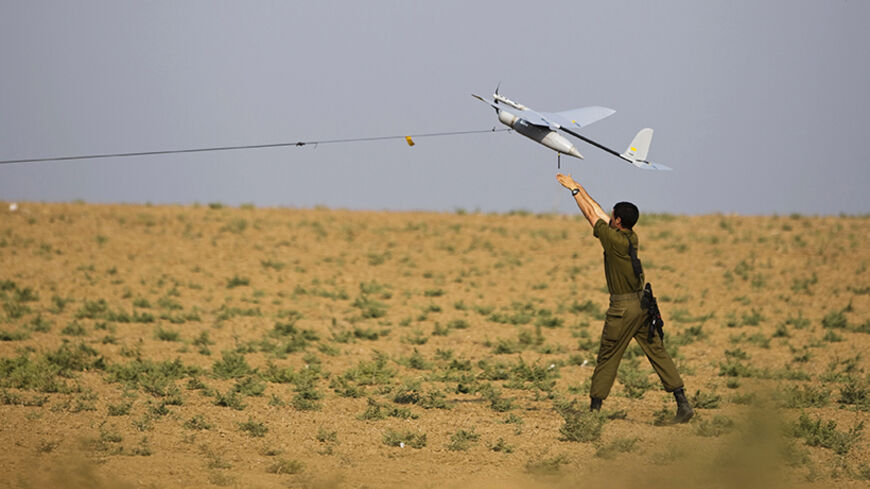 An Israeli soldier launches a drone outside the Gaza Strip, July 22, 2014. - REUTERS/Amir Cohen

RAFAH, Egypt — Israel has intensified its efforts to eliminate the threats to its security emanating from Egypt’s Sinai Peninsula, with which it shares a 200-kilometer (124-mile) border.

A close reading of the security situation in the Israeli-Egyptian border region, from which attacks are launched from time to time toward Israeli territory, makes this situation clear. On July 23, a debate took place in Egyptian media about a precise strike by an Israeli drone against an Egyptian group preparing to fire rockets from Sinai toward Israel.

A security official from the Security Directorate of North Sinai told Al-Monitor on condition of anonymity that the Egyptian border is a “red line” that will not be crossed, but witnesses say Israel has intervened in Egyptian territory in Sinai.

Eyewitnesses who gave exclusive interviews to Al-Monitor claim that a drone suddenly struck a Hyundai Verna in the Muqata region south of Rafah, 5 kilometers (3 miles) from the Israeli border, on July 23.

Abu Salamah al-Sawarkah, who witnessed the incident from nearby, said in an interview with Al-Monitor, “We were startled by an Israeli drone that approached the area and then launched a very precise strike against a gray Verna. Upon approaching the car, we found the bodies of three local tribe members."

Sawarkah continued, “We inspected the car and found pieces of rockets in their possession. These men were known for their affiliation with armed groups.”

In a statement, the group said, “The blood of the Muslim ummah, our people in Gaza and the proud tribes of Sinai was spilled when three of our mujahedeen were martyred. Their car was bombed by an Israeli drone, after our mujahedeen repeatedly demolished the Jewish usurpers with rockets in the Gaza war.” The group also promised to continue to target Israel.

To verify this information, we met one of the area’s sheikhs who is close to the Egyptian intelligence services. He said in an interview with Al-Monitor that Egyptian security services in Sinai were unaware of the incident until the media relayed eyewitness reports.

The sheikh, who refused to disclose his name, said, “This is not the first time that Israel has intervened in Sinai. Israel gave the Egyptian government a list of the names of terrorists who Israel claims have attacked its territory from Sinai. When the Egyptian government ignored the matter, Israel intervened and assassinated some of [those on the list] inside Sinai.”

In August 2013, a similar scene occurred when warplanes struck an armed group that was preparing a platform for rocket launches against Israel at a location near the border. This took place in al-Ajraa region south of Rafah, 3 kilometers (2 miles) from the Israeli border.

Muhammad al-Armili, a native of the border area, said in an interview with Al-Monitor, “Rocket-launching operations targeting Israel take mere minutes. Large numbers of Israeli planes patrol the skies above the border around the clock, while Egyptian planes take more than an hour to reach the area.”

As Abu Youssef al-Barikat, a shepherd in the Khariza region in central Sinai, 1 kilometer from the Israeli border, said in an interview with Al-Monitor, “We see Israeli planes enter Egyptian territory and open fire within our borders on anything that moves. We have people who have been hit while herding sheep in the area.”

Israel has previously executed a number of operations in Sinai. One of the most important incidents was the assassination of Ibrahim Awaida, who was responsible for attacking a troop carrier within Israel in Eilat on Aug. 18, 2011, killing eight Israeli soldiers.

Awaida was killed by an Israeli drone in August 2012 with the help of an Egyptian spy cell working for Israel, according to Ansar Bayt al-Maqdis. They placed electronic targeting devices near his home in the Khariza border region in central Sinai, according to the videotaped confessions of the leader of the cell, which Ansar Bayt al-Maqdis published online after his execution.

One of Awaida’s relatives from the Barikat tribe in central Sinai said in an interview with Al-Monitor, “Israeli intelligence provided information to their Egyptian counterpart, about Awaida’s involvement in attacking Israeli territory. Thus, the Egyptian intelligence arrested Awaida and interrogated him about these accusations, which he denied. He was later released for lack of conclusive evidence against him.”

He added, “Israel insisted that Awaida had executed this operation. This is what spy groups working for Israel claimed, so Israel assassinated him days after his release.”

In April 2013, the Egyptian government announced the discovery of a large spy cell, which became known in the media as “the spies of Ovadia.” According to confessions by members of this cell, the Mossad had conscripted them to transmit information on the activities in Sinai of armed groups, arms trafficking networks and groups committed to waging war on Israel.

According to the investigations by Egyptian intelligence, the cell assisted Israel in many assassination operations against members of Sinai’s Bedouin population by planting electronic targeting devices to mark their locations.

According to witnesses, on Aug. 18, 2011, Israeli planes violated Egyptian airspace and bombed a border checkpoint, killing five Egyptian servicemen. This attack was in response to the infiltration of members of Ansar Bayt al-Maqdis into Israel and their execution of the Eilat operation that killed eight Israeli soldiers.

This incident forced the Egyptian authorities to protest and demand an apology from Israel, as popular anger burst in Cairo and the Israeli Embassy was stormed.

Danny Danon, when he was Israel's deputy defense minister, warned Egyptian authorities about the need to preserve the security of the Israeli-Egyptian border in Sinai. He threatened that his country would hold accountable those who plan attacks against Israel, even if they are located in the territory of another state.

Nevertheless, the recent incidents, based on eyewitness accounts, indicate that Israel is coordinating with the Egyptian military to combat terrorist groups in Sinai, though this cooperation is not publicized. Israel has struck these groups when they approached the border, while Egypt claims responsibility for these strikes in the media to avoid political tension.