How Israel spies on Sinai 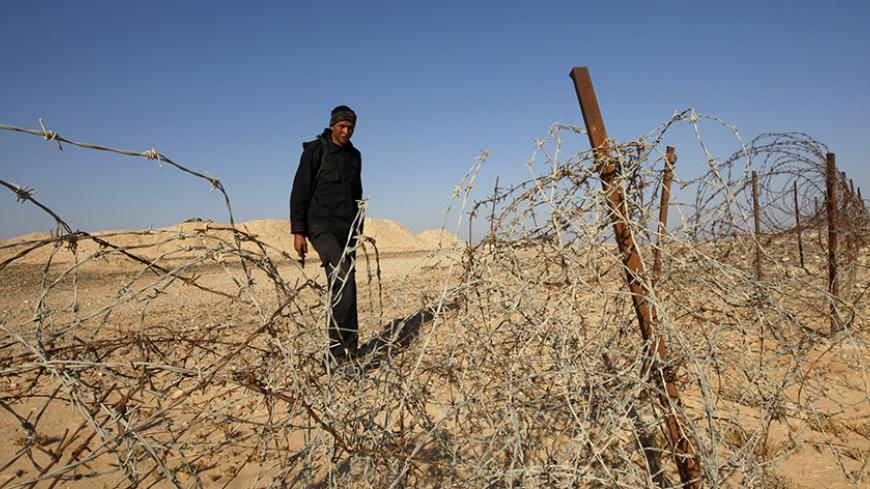 An Egyptian soldier stands behind a barbed wire fence on the border between Israel and Egypt some 50 kilometers (30 miles) north of Eilat, Nov. 28, 2010. - REUTERS/Ronen Zvulun

RAFAH, Egypt — Israeli intelligence services have expanded their activities in the Sinai Peninsula since the Hosni Mubarak regime fell in 2011, and along with it, the Sinai state security apparatus affiliated with the Egyptian Ministry of Interior. This security apparatus was the only representative of Egyptian sovereignty over Sinai for three decades. State security developed a sour reputation among locals, who knew it only for its notorious practices in the peninsula in its attempts to reduce the influence of religious groups and weapons smugglers.

Israeli interventions in the area came with Israel’s growing concern about the movement of militant religious groups in the Egyptian peninsula, especially in the border areas adjacent to Israel.

Israeli intelligence services often target young smugglers, attempting to pressure them into working as operatives for Israel in the peninsula. A member of the Sawarika tribe, one of the largest tribes in Sinai, spoke to Al-Monitor on condition of anonymity about Israel’s attempts to recruit him as an operative.

“In February 2011, during my prison sentence in Israel’s Ohlikdar prison, we were surprised by the state of alertness of Israel’s Mossad and Shabak [Israel’s internal security force, also known as Shin Bet]. We Egyptian prisoners were subject to intense investigation for two months, solitary confinement, punishment and psychological pressure.”

The tribal member, who spent four years in Ohlikdar prison on charges of infiltration and smuggling cigarettes into Israel, said, “I was being investigated by four Mossad officers in a single session. And I was harassed if I didn’t answer all the questions. They were intensely asking me about the smallest details concerning our lives in the border region and the activities of the radicals and those linked to religious, anti-Israel organizations as well as weapons smugglers for Hamas. After the end of the session, they threatened that they would send a videotape to Egyptian security services once I returned to Sinai accusing me of communicating with the Mossad if I didn’t give them new information during my permitted telephone call to my family.”

The tribal member said Israeli intelligence services were on alert immediately after the fall of Egyptian state security in Sinai with the outbreak of the Egyptian revolution in January 2011. That’s according to information he detected during the Mossad investigations. The Israelis were concerned that there was no more security deterrent for the people of Sinai.

Israeli intelligence work in Sinai intensified after the Eilat attack on Aug. 18, 2011, which was carried out by a faction belonging to the terrorist organization Ansar Bayt al-Maqdis. The terrorists managed to cross the 210-kilometer (130-mile) Sinai-Israel border to carry out the operation. After that incident, Israeli intelligence began recruiting active elements from among the terrorist group in the desert villages and residential areas adjacent to Israel in an attempt to repel and sabotage operations from deep in Sinai.

Al-Monitor inspected the dangerous border areas in Sinai to investigate how Mossad organized and recruited its elements, how it collected information and the nature of the operations that were carried out. According to on-the-ground information from residents and workers in the smuggling networks (who preferred not to disclose their identities when they spoke to Al-Monitor), Mossad recruits cells of cigarette and drug smugglers at the border by arresting them during a smuggling operation and threatening them with severe punishments and prosecution on charges of planning to commit terrorist operations inside Israel — if they don’t agree to work on collecting the required information. If they agreed, they would receive money and benefits.

One smuggler explains the details of the tempting services offered for the region’s youth, especially for the young men working in smuggling along the border. “A Mossad officer, known as Abu Swilem, contacted me and asked me to give him certain information about members affiliated with Salafist jihadism in al-Muqataa village, al-Zahir, al-Mahdia, Sadout, al-Massourah. In return, he said that he would make it easier for me to smuggle 10 kilograms [22 pounds] of pure cocaine with a powered [subsidized] price from Israel into Sinai. I said no, but he tried to call me back over 10 times and then he contacted other smugglers I know and they agreed,” he said.

“The Mossad offers people inducements, each according to their profile. Some people are offered $1,000 to $2,000 per month. They are even allowed to enter Israel through the border at any time and check into luxurious hotels in Tel Aviv with Israeli women who work with the Mossad. Those who are required to assassinate people who are wanted for carrying out attacks against Israel are offered sums amounting to $20,000,” the smuggler said.

The Mossad and Shabak agencies then expanded their circle of spying by giving missions to the smuggler networks. The intelligence agencies lured unemployed young people in the border areas, especially the relatives of jihadist elements who were affiliated with terrorist organizations. Mossad and the Shabak tried to recruit them by offering them money or by trapping them in the smuggling networks, arresting them and then releasing them if they agreed to perform some tasks for Israeli intelligence.

In an interview with Al-Monitor, a young man from al-Muqataa village, close to the Israeli border south of Rafah, said that one task carried out by a local was to flood his village and the neighboring villages with Israeli phones, obtained through smugglers, after the smugglers persuaded him that he would make good money. After a while, it was discovered that the smuggler who gave him the phones worked for the Mossad and that these phones, which were distributed among residents, contained wiretaps whereby Israel could gather information from telephone calls.

The young man said that all border areas depend on the Israeli telecommunications network because the Egyptian network is absent in their areas, stressing that this endangers Egyptian national security.

These Israeli networks deployed in the region are not just about surveillance of mobile telephones. Some young people, whom Israeli intelligence deemed competent to perform certain tasks, have been organized to analyze conversations and the extent and accuracy of information about the movements of jihadists or the smugglers movement sending weapons to Gaza, according to a young man who was called by Mossad.

“I was on the phone (that has a SIM card from the Israeli telecommunication company Orange) with my cousin. I told him in local dialect that a member of one of the fundamentalist religious groups was shooting with a PK machine gun at the army tanks, as soldiers were running away,” he said.

“The Mossad officer asked me for information about the guy I was talking about and his whereabouts, in exchange for $4,000. I hung up on him and destroyed the SIM card,” he said.

One of the most important tasks carried out by spies recruited in the border region is to plant electronic devices in weapons intended to be smuggled to Hamas in the Gaza Strip, to locate Hamas weapons stores and hit them. A weapons smuggler told Al-Monitor that some of those operations were uncovered by Hamas.

Other tasks were to assassinate elements belonging to armed terrorist groups in Sinai.

The inhabitants of the border villages and those who call themselves "the villages of fire" assert that they are victims of neglect by successive Egyptian regimes, who have deprived them of their right to drinking water, as well as the absence of state services and widespread unemployment, forcing them to work in smuggling and risky fields. This leads to exploitation of young people not only by Israeli intelligence services, but also Egyptian intelligence and terrorist groups.

An Egyptian security source refused to confirm or deny information about the work of the Mossad in Sinai. Activists and politicians in Sinai also refused to comment for fear of security and legal repercussions.

Based on information from the ground, it seems that the situation in Sinai is worsening, especially with the increasing number of players in this turbulent peninsula.