The breakdown of order in Libya and the rise of militancy in the Sinai Peninsula have led to new terror threats and a new normal for Egyptians concerned about security. 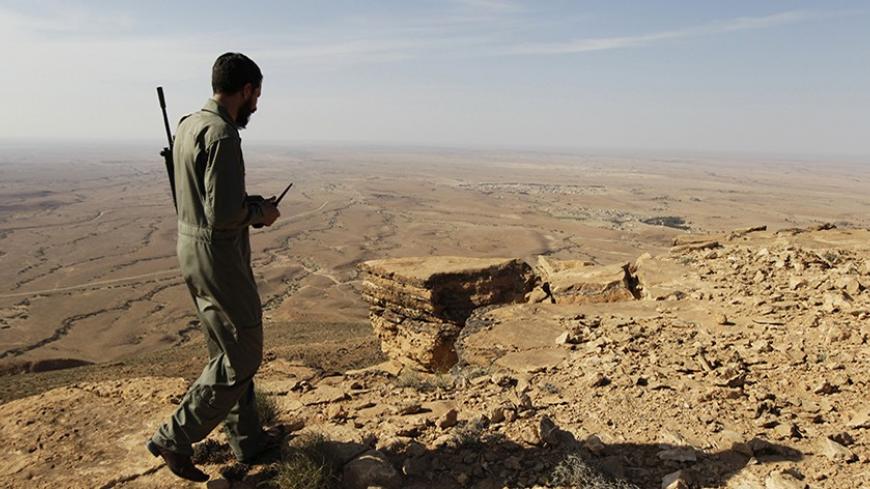 Fighters patrol the desert south of the Libyan rebel-held town of Ar Rujbann in the Western Mountains, some 150 kilometers (93 miles) southwest of Tripoli, May 28, 2011. - REUTERS/Youssef Boudlal

“Ungoverned space” — areas nominally within the sovereign reach of the ruling power but effectively outside its control, are well on their way to becoming one of the defining features of the post-US occupation, post-Arab Spring Middle East. From Anbar in Iraq, to the entire area of what we once knew as Libya, the power of the state has atrophied or even disappeared. In its place, a motley assortment of well-armed pretenders or, increasingly, no one at all, contests for power and spoils, creating a vacuum filled by jihadists, arms dealers, drug smugglers and human traffickers.

The western desert — where Egypt meets Libya — is the latest region to join this expanding club. “The western desert risks becoming an ungoverned area,” explained a well-informed Egyptian official in a conversation in Cairo last week. “If we do not change direction, it will become a no-man's-land in a decade.”

This alert highlights the volatile western desert bordering Libya, along with the Sinai Peninsula and, increasingly, parts of Egypt’s urban heartland itself, as regions where the power of the Egyptian state is being challenged by force of arms.

Cairo remains the beating heart of the country and the regime. Almost daily challenges and confrontations that result in casualties to the security forces, those opposing it and others unfortunate enough to find themselves in harm’s way, have become an all but unremarkable part of its urban landscape.

As they do elsewhere, Cairenes adjust to this tally of incidents and the relatively few number of casualties. Cairo’s size dwarfs these inconstant and small-scale challenges to the regime. The unrest, however, creates an uneasy new normal in Cairo.

Cairo is still far from meeting the definition of ungoverned space. Not so, the wide ungoverned expanses that define Egypt’s eastern and western frontiers.

Egypt’s Sinai Peninsula, a mountainous area of 60,000 square kilometers (23,166 square miles) inhabited by a population of 2.5 million long estranged from central authority in Cairo, has met the definition of ungoverned space since the fall of the Mubarak regime in 2011. In the first days of the revolution, arms depots were overrun and national police forces from the Ministry of Interior simply disappeared from the scene.

In place of civil police, the Egyptian military now attempts to rule Sinai. Far from inquiring eyes, it leads a dirty counterinsurgency war against an assortment of criminal and jihadist opponents in which some many hundreds are said to have died. Sinai’s disaffected and long-suffering population, however, bears the brunt of this assault — squeezed between the anvil of armed rebels and the hammer used by the regime in an until now losing effort to crush them.

Earlier this week, a natural gas pipeline was bombed near El Arish, in the north of the peninsula. No casualties were reported in the explosion, the 22nd such incident since 2011.

This damaged pipeline supplies two cement companies in central Sinai, and is also used to export natural gas to Jordan. Israel, too, used to be supplied by this network, but the constant assaults on this infrastructure and Egypt’s own domestic demand fatally undermined this trade in 2012 — long considered to be one of the core features of the Israel-Egypt Peace treaty.

The joint Israel-Egypt interest in returning Sinai to state control is clear. Even during the Morsi presidency, Cairo and Israel cooperated closely on both operational and intelligence matters related to the peninsula. These ties have grown since July. Israeli officials have no complaints, saying that cooperation on Sinai has never been better, ever.

Earlier this week, presidential aspirant Abdel Fattah al-Sisi addressed this cooperation, saying, “The Egyptian army operates in Sinai as it sees fit, and if the consequences of terror in Sinai necessitate changing the accord, then we will and Israel will not object to that because it is aware of the gravity of the situation.”

In a later interview with Sky in Arabic, Sisi added, “The Israeli side accepts the Egyptian army presence there with understanding. If there is a need to change the Camp David Accord, we will.”

Until now, Egypt and Israel have agreed to ignore treaty restrictions on Egypt’s military deployment in Sinai. Egypt, after an initial hiccup in 2012, coordinates closely with Israel on the types and capabilities of arms and number of forces operating there. A former senior Israeli defense official, for example, took note that American-made Apache helicopters are a permitted part of Egypt’s counterinsurgency. He made certain to note, however, that the equipment in Egypt’s Apaches is far inferior to those fielded by Israel. The choppers could be “taken out” easily by Israel. Their presence in the skies near the border poses no security problem for Israel.

While Sinai boils, thinly stretched security forces are also compelled to turn their eyes west, to the frontier with Libya. Egypt’s western desert has long been a smugglers’ gateway to Libya and the chronically misruled African heartland. These days, with the Egyptian security system focused on protecting Egypt’s populated center, and Libya’s state security system in tatters, the area has been reborn as the Wild West.

Libya’s arsenal of weapons presents an unending feast for a kaleidoscope of bad guys. Smuggling and human trafficking round out the dangerous picture. Unlike Sinai, authorities cannot even begin to point to a group like Ansar Bayt al-Maqdis, which operates in Sinai and now also urban Egypt, as the head of the snake.

Anarchy rules in this ungoverned corner where Egypt and Libya meet. And phantoms, like the nonexistent Free Egyptian Army, are said to be operation and training in Libya.

In an interview with Al-Ahram on April 26, Gen. Saied Shafik, deputy minister of interior for general security, said that there is so such thing as a “Free Egyptian Army.”

However, he confirmed that Egypt has arrested a “terrorist cell that was in possession of tons of explosives, explosive belts, cruise missiles and heavy equipment, which was preparing to target the interim president, Adly Mansour, Field Marshal Abdel Fattah al-Sisi and Interior Minister Maj. Gen. Mohammad Ibrahim, along with 12 of his top aides and eight important figures, in what is known as 'the list of 23.'”

Security measures have been increased at the port of Salloum, a small regional trading center just east of the Libyan border. Land and security patrols will be more frequent on desert roads to prevent entry to Egypt from Libya.

The Salloum land port administration has announced that the crossing of individuals from both sides had been banned as of Tuesday until the security situation in Libya improves.

Commenting on this situation, informed military sources told Al-Akhbar last month that “Egypt is in a real crisis. The ignorance of the security forces and intelligence services of new elements of terrorism is disastrous.”