The tragedy of Sinai

The one-time vacation hot spot has become a war zone. 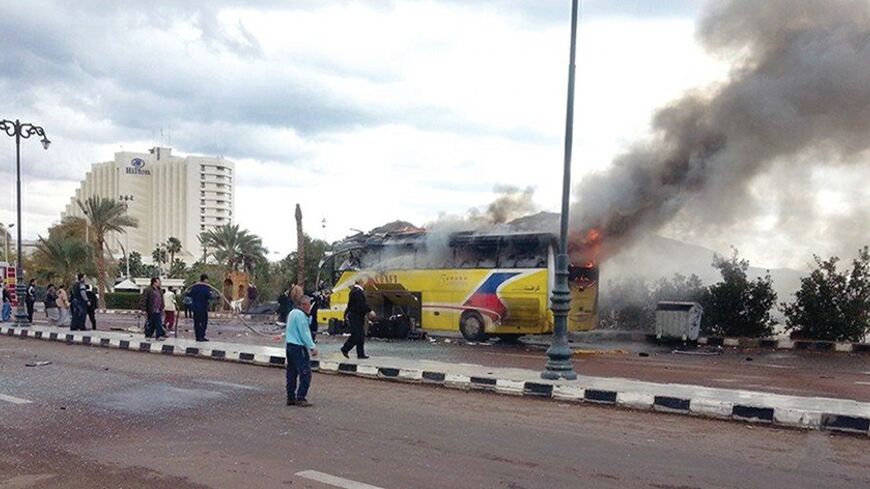 People and security officials walk and look as smoke rises from a tourist bus in the Red Sea resort town of Taba in the south Sinai, Feb. 16, 2014.

A tragedy that takes place on familiar turf is somehow more genuine and intimate than the run-of-the-mill disasters that we hear about every day. So it was for me when I heard of the bombing on Sunday of a tourist bus that killed four people on the Egyptian side of the Taba border crossing linking Israel and Egypt.

I first visited Sinai in 1980, when I traveled by bus from Tel Aviv to Cairo. In those days, before there was a tunnel under the Suez Canal, passengers had to board a simple, motorized raft to make the short passage across the Canal. There was a bar, a smoke-filled room with a scratchy, sandy floor next to the landing whose assorted local patrons still bring to mind the bar in the original "Star Wars" movie. In other words, foreign and exotic, with a hint of menace and adventure.

As a young freelance journalist, I was no stranger to Sinai. In those days, it offered a cheap beach vacation and the ever-present possibility of romance with the odd Dane or Swede in search of a winter tan. I used to set up camp under the palm trees that then graced the empty, windswept beaches of Nueba, 70 kilometers (43.5 miles) from the Taba border, where those unfortunate South Korean tourists met their end. There were none of the hotels and bungalows that followed in the wake of Egypt’s sovereign return to the peninsula after Israel’s evacuation in 1980. A local Bedouin family from the Tarabin tribe maintained the rudimentary huts and operated an unadorned collection of formica tables, serving Fanta and hummus.

Some 150 kilometers (93 miles) south of Nueba lies Sharm el-Sheikh, where the Red Sea and the Gulf of Aqaba meet. Moshe Dayan once famously declared that Israel’s presence there was more important than peace with Egypt, a declaration he had the good sense to overlook after Sadat’s visit to Jerusalem in 1976. When I visited for the first time as a college student soon thereafter, I had the then-spectacular Na’ama Bay all to myself, except for a nearby Israeli field school that sat on a precipice opposite. Today there are more than 30,000 hotel and condo units in and around Sharm. The tiny encampment has become a city of 35,000, all but obliterating the isolated beauty of the place as I experienced it so many years ago.

The isolation and tranquility that for so long defined Sinai has long been lost. Mass tourism was the initial culprit, bringing masses of pale, sun-starved Europeans to bake next to man-made swimming pools and ride jeeps and sorry-looking camels though the desert nearby.

But tourism also created winners and losers in Sinai. Among the former count those well-connected Cairenes who were able to profit from the regime's crony capitalism and the labor migrants from the mainland. The losers were largely the local Sinai Bedouin, who were unable to win Cairo’s recognition of their land rights to the pristine shore or permitted to share fully in the labor and services boom created to attend to the boatloads of visitors disgorged daily at the airport in Sharm.

Local discontent among Sinai’s half-million indigenous inhabitants, as distinct from the Egyptians for whom Sinai is a relatively lucrative if temporary home, has characterized the region for years. A decade ago, I hired a local taxi in Taba for the five-hour trip to Cairo for 500 Egyptian pounds, then $100. The captain at the Interior Ministry police station at the roundabout next to the border crossing insisted that a young, white-uniformed conscript accompany me to Cairo for my own protection. We drove this young man, who blessed his good fortune at being ordered to the capital in air-conditioned comfort, to his barracks, down a deeply rutted maze of ramshackle buildings never seen by the tourists at the Hilton hotel nearby. He ran into his dormitory, soon exiting in his dress uniform, complete with sidearm. I never feel more ill at ease and vulnerable than when I drive with someone who is armed for my protection. And so it was then in Sinai, many years before the anarchy that now dominates the area.

South Sinai Intelligence Chief Gen. Magdi Mussa said yesterday, “The Taba attack four days ago was perpetrated by a suicide bomber, belonging to the jihadist group Ansar Bayt al-Maqdis, who boarded the bus after it pulled over near the Taba crossing to complete the procedures to enter the Israeli side.”

The Taba Hilton stands 100 meters [328 feet] from the border where the bus was blown up. I have walked this route many times. The Taba Hilton and Rafi’s Village (named after its original Israeli owner) nearby used to be frequented by divers like myself. I continued to patronize the village bungalows after the Taba Hilton itself was blown up in October 2004 when a truck drove into the lobby and exploded, killing 31 people and wounding 159. Ten floors of the hotel collapsed following the blast.

Loaded down with luggage, I often walked past the blackened shell of the main hotel to the nearby beachfront bungalows. I was a counterintuitive traveler. Because of the bombing, Israeli visitors, the Hilton’s most numerous patrons, disappeared and the casino was closed. On the positive side, at least for me and my fellow divers, there was always plenty of cheap accommodation in the village. And no one had scared the fish and coral away.

In the three years since the January 25 revolution, Egypt has been engaged in an increasingly brutal counterinsurgency campaign against the militants — a motley but deadly combination of disaffected tribes and a new breed of jihadist tourists — throughout the 60,000 square-kilometer (23,166 square-mile) peninsula. As reported in Al-Monitor, 11 Egyptian battalions have been deployed to Sinai to confront them.

"Ansar Bayt al-Maqdis has successfully sacrificed one of its heroes to detonate the bus headed toward the Zionists, and this comes as part of our economic war against this regime of traitors," the group said in a statement after the bus attack.

Sinai today is what US Director of National Intelligence James Clapper calls “ungoverned space.” Ansar Bayt al-Maqdis has warned tourists to leave Egypt "before it's too late" and threatened to attack anyone who stays in the country after a deadline of Feb. 20. "We recommend tourists to get out safely before the expiry of the deadline," the group tweeted in English.

Safe to say I will not be visiting Taba, or anywhere else in Sinai, anytime soon. More's the pity.