The streets of Gaza are empty once again as locals prepare for further Israeli bombardment. 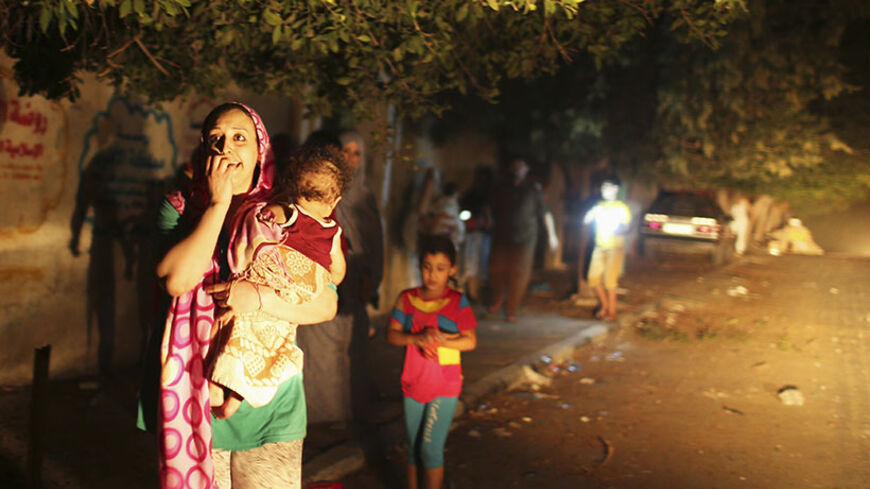 Palestinians flee their houses at the scene of what witnesses said was an Israeli airstrike in Gaza City, Aug. 19, 2014. - REUTERS/Mohammed Salem

GAZA CITY, Gaza Strip — The streets of the Gaza Strip were completely deserted on the afternoon of Aug. 19, after life had returned to the city during the 12-day cease-fire. Israeli warplanes soared over the city, heavily bombarding neighborhoods and residential houses where people were still present.

The deterioration on the ground was also reflected in the political situation, when chief Palestinian negotiator, Azzam al-Ahmed, declared on Aug. 20, "A decision was reached overnight on the part of the Israeli side to derail the negotiations and end the truce."

At 3:53 p.m. on Aug. 19, Israeli army spokesman Avichay Adraee declared on his Facebook page, "Vandals in the Gaza Strip violated the cease-fire and fired three rockets that exploded in open areas in the cities of Beersheba and Netivot, causing no injuries or damage."

It was not long before Israeli Prime Minister Benjamin Netanyahu ordered the Israeli delegation to leave Cairo and the Israeli army to strike the Gaza Strip, while no Palestinian side had declared firing any rockets as they have done since the war began on July 8.

Events took a dramatic turn on Aug. 19, as people rushed to take refuge, as stores and cafes closed their doors warning their customers against the return of an emergency state.

Soon after, warplanes flew overhead, targeting empty agricultural lands. A few minutes after 10 p.m., the heavy thud of an explosion rocked Gaza and lit up the entire city.

Political analyst Atef Abu Seif told Al-Monitor, "It is clear that Israel had bluntly violated the truce when it targeted the house of the Dalu family."

He also commented on the rockets that were allegedly fired from Gaza. "There is no evidence that they were fired from Gaza. None of the factions claimed responsibility for this attack. It was Israel that spread and stressed the news, allowing preliminary photos of the rockets to be published without any control," he said.

He added that Israel would not make such a risky venture, unless it is certain that it will achieve a valuable goal it had previously planned.

Palestinians awaited news about Deif’s fate, until the Qassam Brigades released a statement on Aug. 20 saying, "You do not have what it takes to reach the general commander, Mohammed Deif." For his part, Abu Marzouk said a few hours before the statement was released during a press meeting that "Deif is alive and kicking."

Nevertheless, the news about Deif's survival did not prevent further escalation. The war seemed to have returned to square one, with the deaths of more than 58 people in more than a hundred air raids carried out by Israeli forces since the breach of the truce.

Abu Fayez al-Sharfa, 80, told Al-Monitor, "The war has returned, but even worse than before. What is happening is a deluge. Throughout the 80 years of my life, I have never seen what I saw today."

Sharfa pointed to the 500-meter (0.3-mile) area of destruction around him in the Sheikh Radwan neighborhood caused by the Israeli bombing of the Dalu family.

Media outlets published photos of US-made GBU-28 rockets piercing through shelters and turning the Dalu house into a pile of rubble. Security guards were surrounding the bombed site, banning people from getting closer for fear of bomb residue, as one of them told Al-Monitor.

Sharfa said that three members of his family were injured as a result of the blasts. He added that the people of the neighborhood came out running like maniacs, not knowing where to head.

It seemed that neither Sharfa nor neighbor Abu Yaacoub Abu Kweik — who fled from eastern Gaza to the Sheikh Radwan neighborhood to take shelter — knew that the wife of the Qassam commander, Wadad Asfoura, or his son Ali, who's not even 1 year old, had been killed.

Ali Abu Olbeh spoke to Al-Monitor about the bombed building of his neighbor Rabah al-Dalu. "The building had two apartments for rent. We never heard that Deif's wife had been living there, but the woman that was said to be his wife has been living in the building for about a year," he said.

Ali's mother, Sarari Abu Olbeh said while pointing to the shrapnel and glass fragments scattered around, "I was sitting here with the children when the shelling started. The bombing was carried out seven times and we had to crawl on the floor, with windows and doors falling down, as we swallowed dust."

Her son interrupted her, saying, “In the seconds between each of the seven bombings, we heard the son of the landlord shouting ‘my mom and I are alive!’ But another rocket soon came to blow them away.” Ali explained that they pulled the bodies of the landlord’s wife and two of her sons’ as well as that of the woman and her child out of the rubble.

Not far from the bombed building, and in front of the shrine of Sheikh Radwan, stood Abu Mazen al-Dalu, after having buried his wife and two nephews. "At the time of the bombing, my brother was in the mosque, so he was not hurt. His family, however, lives on the ground floor. Above them, two apartments are rented out. We do not know the nature of the relationship between the tenants and Deif,” he told Al-Monitor.

Everyone seemed reluctant when asked about the said guest, even though local media had openly spoken of the matter. Abu Mazen, however, added that “there is another funeral in Jabaliya for the woman and her child.”

The streets were empty throughout the whole day Aug. 20 and fear spread as warplanes targeted gathered crowds, as well as a grocery store, in al-Zeitouna neighborhood.

The warplanes returned at dawn Aug. 21 to bomb the Kallab family household in Rafah with nine F-16 rockets, which resulted in the destruction of more than three houses around it. The number of deaths mounted to 10 at the time of writing, including the father of the director of Al Mezan Center For Human Rights, Issam Younes, as well as his stepmother and his niece.