Despite strong bilateral ties, differences over the new policy document emerged between Hamas and Islamic Jihad, raising questions on the future of their relations. 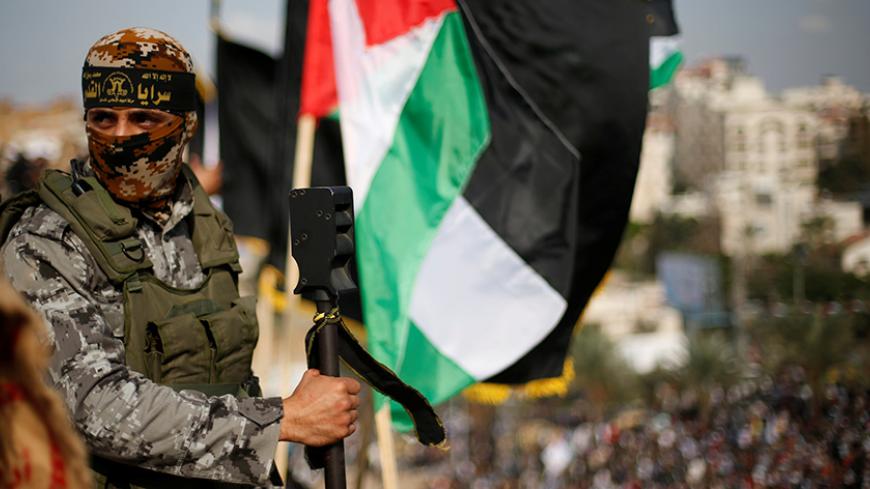 Palestinians attend a rally marking the 29th anniversary of the foundation of the Islamic Jihad movement in Gaza City, Gaza Strip, Oct. 21, 2016.

RAMALLAH, West Bank — When Khaled Meshaal, the former head of Hamas' political bureau, announced a Hamas policy document May 1 from Doha, Qatar, this brought a critical response from Islamic Jihad.

Strong relations have always existed between Islamic Jihad and Hamas, not only because both movements are Islamist, but also because they have both embraced armed resistance against Israel as the sole option to liberate Palestine. This is in addition to their military cooperation in the Gaza Strip and joint political stances rejecting PLO political discourse based on negotiations and recognizing Israel.

Islamic Jihad criticized the policy document where Hamas agreed on the establishment of a Palestinian state within the 1967 borders, with Jerusalem as its capital, considering it to be a topic of national consensus. Ziad al-Nakhla, the deputy leader of Islamic Jihad, said in a press interview May 6, “We are ungratified with a part of the document. … The document evolved toward a dead end — toward the quest for solutions and medium solutions to the Palestinian cause under the umbrella of so-called international legitimacy.”

Nakhla added, “Hamas' agreeing on the establishment of a Palestinian state within the 1967 borders is not welcome. This is against the national consensus and would reproduce the labyrinth caused by the PLO's interim program.”

He criticized Hamas for including in the document that the establishment of a Palestinian state within the 1967 borders is a topic of national consensus. He said, “Islamic Jihad opposes this wording. Does this mean that we do not have a sense of nationalism or that we are against the consensus?”

He said, “The wording is unfavorable and lacks regard for the feelings of fellow armed resistance members.”

Islamic Jihad leader Nafez Azzam told Al-Monitor, “We hope the document does not impact bilateral relations; we hope our ties with Hamas progress.”

Commenting on the reason behind the Islamic Jihad opposition, he said all previous political initiatives that were based on the establishment of a Palestinian state within the 1967 borders were fruitless and disdained by Israel, and based on that, Hamas cannot take the risk and count on this document to "obtain international support.”

Azzam indicated that “Islamic Jihad disagrees with Hamas' saying in the document that negotiations with Israel are a variable.” He added, “Refusing to negotiate with Israel is a constant for us. Thus, the stance on the negotiations cannot vary depending on the circumstances.”

Commenting on the Islamic Jihad stance in case Hamas joins a political process with Israel under the umbrella of regional countries, he said, “Let’s not rush into things; we hope that things work out to our liking, namely the promotion of ties with Hamas.”

Hamas leader Yahya Moussa told Al-Monitor, “The Hamas policy document is supposed to enhance [Hamas'] relations with all forces and factions, most notably Islamic Jihad — which is the closest to Hamas, as their views converge on important national issues and general guidelines.”

He said, “The fact that Islamic Jihad does not agree on a part or rather an item of the policy document [the establishment of a Palestinian state within the 1967 borders] does not affect bilateral ties.”

Hamas leader Ghazi Hamad told Al-Monitor, “The document is a drafting of ideas on national issues, which Hamas had put forward in recent years.” He said, “The entire document needs to be read, as it embodies Hamas' political positions as part of a national unanimous agreement.”

Commenting on the criticism leveled by Hamas allies, he said, “The Hamas document is not the Holy Quran; thus, it can stand criticism and disagreement. Islamic Jihad and Fatah have the right to criticize it. The criticism is not shameful and does not tarnish the document [as a whole] or affect the movement's relations. The document can be altered depending on the circumstances, policies and changes in the region.”

On the future of Hamas-Islamic Jihad relations in light of the new policy document, Iyad Barghouthi — a political writer who focuses on Islamist movements — told Al-Monitor, “Their unified stance on the national cause, namely that Palestine is an occupied territory, is what brought the two movements close to each other. Based on that, in case Hamas joins the political process and makes particular commitments with Israel, as the PLO has done, it will clash with Islamic Jihad. Yet if the policy document is not translated into actions on the ground, bilateral ties will remain unchanged.”

Many, including Fatah, saw the Hamas policy document as being close to the PLO's 1988 political declaration, which formally announced the PLO's acceptance of establishing a state in the West Bank and Gaza Strip. Barghouthi said, “The Hamas policy document points to the movement’s political pragmatism. It raises fear within Islamic Jihad that Hamas would join the political process with Israel just as the PLO has done.”

Nevertheless, Moussa denied that the document would pave the way for Hamas to join the political process like the PLO. He said, “There is a difference between the PLO document and the Hamas policy document. Hamas confirmed in the document that Palestine is for the Palestinian people and that not an inch of it will be ceded. Yet the consensus prevails over the Palestinian arena on the establishment of a state within the 1967 borders. Hamas will not be an obstacle to this solution.”

Although Hamas and Islamic Jihad emphasized their strong bilateral ties and said they will not be affected by the document, these relations depend on Hamas' inclination to enforce the content of the document via a political process with Israel under the sponsorship of regional countries such as Qatar and Turkey. Differences may grow bigger unless the document only serves as a declaration of a political stance that allows Hamas to open up to the world.