Palestinian factions failed to reconcile during the Moscow meeting, but Russia didn't come away empty-handed. 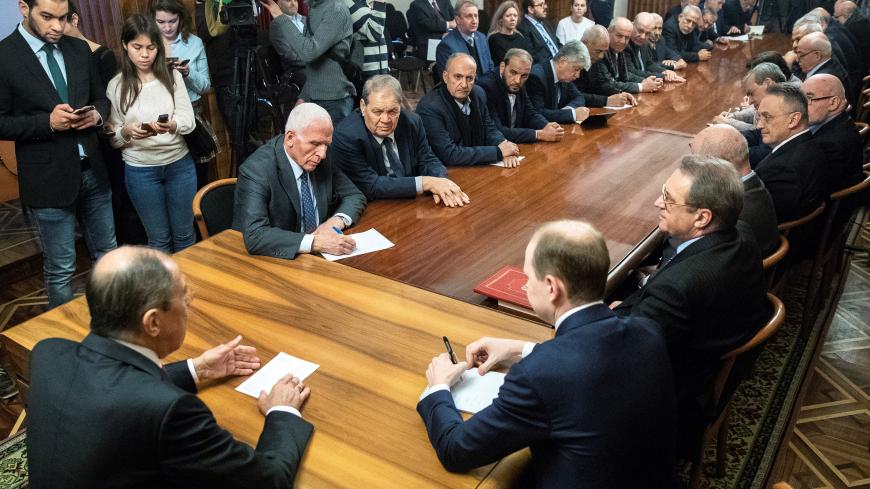 Russian Foreign Minister Sergey Lavrov (L) talks during a meeting with representatives of Palestinian groups and movements as part of intra-Palestinian talks in Moscow, Russia, Feb. 12, 2019. - Pavel Golovkin/Pool via REUTERS

While Moscow may have failed to reconcile Palestinians factions during a three-day-long meeting in the Russian capital that kicked off Feb. 11, it did manage to once again throw down the gauntlet on US plans in the Middle East.

The event, which gathered delegations of 12 political movements from Palestine — including Fatah, Hamas and the Islamic Jihad Movement — was hosted by the Institute of Oriental Studies of the Russian Academy of Sciences for the third time. Two previous summits had taken place in 2011 and 2017.

Egypt has long “reserved” the subject of the Palestinian reconciliation as its own "area of responsibility.” Moscow does not question Cairo’s status; moreover, it wholeheartedly supports the North African country’s efforts to resolve the controversies, coming of the belief that cohesion inside Palestine is mandatory for the progress of its negotiations with Israel.

During the meeting, Foreign Minister Sergey Lavrov directly stated that Russia strives to see the Cairo agreement actually implemented. A source in the Russian Foreign Ministry who spoke with Al-Monitor not for attribution said back in December 2018 that the ministry considered the planned visit of the Hamas leader Ismail Haniyeh to Moscow to be “inappropriate” and insisted that the intra-Palestinian meeting should take place first. Nevertheless, Hamas representatives still hope that Haniyeh will arrive in Moscow in April or May — though Russia still hasn’t extended an official invitation. A lot depends on the progress of the intra-Palestinian dialogue itself.

Moscow’s persistent efforts to consolidate Palestine contradict the US position. The Trump administration has recently claimed that should Ramallah fail to approve the new project of Palestinian-Israeli resolution, dubbed “the deal of the century,” the United States will discuss it with Gaza.

“We have no doubt that news of restored unity in the Palestinian ranks will take the trump cards away from those who would like to destroy the foundations of the settlement laid down in UN resolutions and the Arab Peace Initiative,” Lavrov said in his opening remarks to the Palestinian delegations, alluding to the United States.

“We see the greatest danger in the stance of the United States,” he stressed.

“Our US colleagues are bluntly putting forward new recipes in an attempt to resolve this issue, and have for more than two years now been promising to come up with the 'deal of the century.' However, the information we have shows that this future “deal” will destroy everything that has been accomplished so far,” the minister added.

Remarkably, this statement was made a few hours before the opening of the US-initiated conference on the Middle East in Warsaw. Russia declined the invitation for the Warsaw conference for two reasons: the ”anti-Iranian intonations” and, initially, the lack of Palestinian issues on the agenda, which Moscow insists are one of the top problems in the region. Poland later insisted on putting the Palestinian issue on the conference agenda. The Warsaw conference was expecting to see a disclosure of parts of “the deal of the century,” which both Russians and Palestinians object to. When the United States moved its embassy to Jerusalem and refused to fund the UNRWA, Palestine refused to interact with Washington yet remained deeply concerned that its own fate would be decided behind its back. Moscow thus acts as a guarantor that this will not be the case.

“This deal is aimed to bury our hopes and efforts to establish the Palestinian state within the borders of 1967, with its capital in Eastern Jerusalem,” Azzam Al-Ahmad, the member of Fatah’s Central Committee and the Executive Committee of the Palestine Liberation Organization (PLO), claimed during the press-conference concluding the Moscow meeting.

The head of Hamas delegation and deputy leader of the organization Mousa Abu Marzook expressed the same opinion saying, “We reject the American plan of Middle Eastern resolution. … Since the very beginning of Trump’s presidency and his administration’s rule, a number of decisions associated with the deal have been made. The first and foremost one is recognizing Jerusalem as the official capital of Israel and moving the US Embassy there. Later, Americans attempted to eliminate the refugee problem,” he complained.

Moscow commends the Palestinians for declining the American plan. Moreover, it became clear that all political factions present at the summit in Moscow object to the deal unanimously. It should be noted that this intra-Palestinian meeting became the first in almost a year, which the Russian organizers see as a success given the amount of effort spent on bringing opposing factions at the negotiating table. The Russians cannot be naive enough to actually believe that three days would suffice to reconcile Fatah and Hamas, ultimately consolidating Palestinian elites. Yet it was planned that as a result of the summit, the delegates would make a joint statement.

“We do not expect the process to change entirely after less than two days of negotiation. If they agree upon such a document, this will basically be the outcome needed,” Vitaly Naumkin, the academic president of the Institute of Oriental Studies, who moderated the meeting, told the Interfax media agency before opening the event.

The sides, however, failed to draw out such a statement. The debates continued until the last minute, and the concluding press conference was delayed for an hour. However, the Palestinians have not managed to reach a consensus. The Islamic Jihad Movement proved to be the most obstinate among the factions. According to the Kommersant newspaper, which cited the sources close to the meeting, after delegates of the movement had protested against several paragraphs of the agreement, Hamas decided to follow suit to avoid seeming more flexible and expressed its own objections.

“We refrained from signing the document mentioning the creation of a Palestinian state within the 1967 borders with East Jerusalem as a capital,” Mohammed Al-Hindi, member of Islamic Jihad’s Political Bureau, told Kommersant. The movement believes that Israel continues to occupy the territories that should be included in the nation of Palestine, and the forms of Palestine-Israeli resolution enlisted in the Oslo Accord of 1993 must be abolished. The debates revolved around whether it was acceptable to mention the nation of Palestine specifically within the 1967 borders and whether to call the capital Jerusalem or East Jerusalem.

Another controversy arose around the role of the PLO. “If we claim that the PLO represents the interests of Palestinian people, it should be added that Hamas and Islamic Jihad demand the reform of the organization. How can it represent everyone if we are left outside?” Hindi asked.

During the final press conference and later in private conversations with reporters, participants said the controversies around the terms had not been highly significant. They emphasized that as the main result, the sides had ultimately accepted the necessity to continue the national dialogue. Moreover, they agreed to find a format allowing Russia to cooperate with Egypt as a co-organizer of intra-Palestinian dialogue.

“We hope that we will find the formula allowing Egypt and Russia to support each other,” Mustafa Barghouti, secretary-general of the Palestinian National Initiative, told Al-Monitor.

At the same time, in spite of the attempts to smooth the controversies out, the Palestinians had to admit that their work had not been enough to meet Russia’s expectations. Ahmad even apologized to the hosts of the summit for this while Barghouti extended his apologies to the people of Palestine for not being able to deliver on their expectations just yet.