Can Russia succeed with Palestinians where Egypt has failed?

Moscow has expressed its interest in facilitating an intra-Palestinian reconciliation as well as furthering Palestinian-Israeli relations, but Israel remains wary of such efforts. 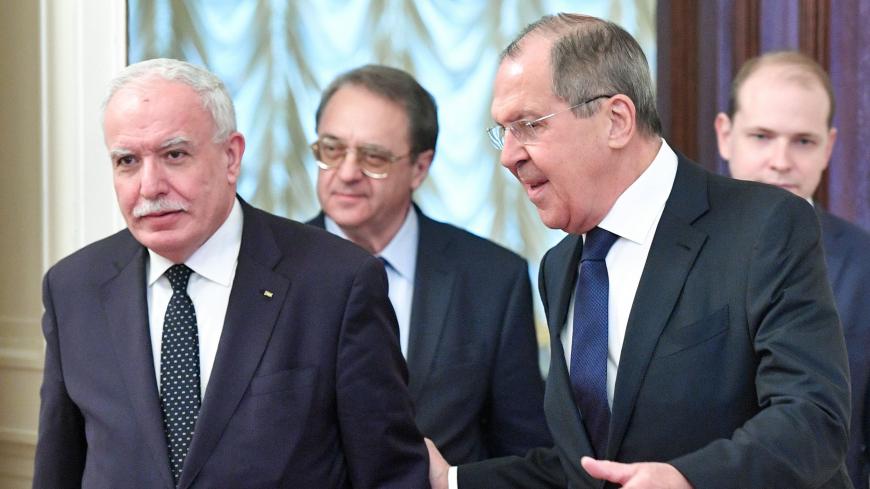 Russia hosted Palestinian Foreign Minister Riyad al-Maliki in Moscow on Dec. 21 for talks focusing on bilateral relations, the Israeli-Palestinian peace process and the intra-Palestinian reconciliation talks mediated by Egypt. There hasn't been much progress on the latter two issues, and Israel is less than enthusiastic about Russian efforts in regard to them.

A reconciliation between Hamas, which controls Gaza, and Fatah, which dominates the Palestinian Authority (PA), which controls the West Bank, appears to be dead in the water despite Egypt's efforts to keep it alive. Russia has also reached out to both parties. Visits by high-ranking PA officials to Russia have become routine. PA President Mahmoud Abbas himself has been to the Russian capital twice this year, and Ismail Haniyeh, the head of Hamas' political bureau, is set to visit early next year.

Israel has lambasted Russia’s outreach to Hamas. The Israeli ambassador to Russia, Harry Koren, reportedly protested the planned Haniyeh visit in a Dec. 19 meeting with Russian Deputy Foreign Minister Mikhail Bogdanov. The Russian diplomat responded by reminding Koren that Israel itself has been negotiating with Hamas, to reach a formal truce.

As for Russian-Palestinian bilateral links, Russian Foreign Minister Sergey Lavrov said at his meeting with Maliki that trade between Russia and Palestine remains modest. In 2017, they traded $3.04 million worth of goods, with Russian exports totaling $2.67 million and imports $373,900. In November, Russian Minister of Labor and Social Development Maxim Topilin reported year-on-year growth in trade of 61% for the first eight months of 2018, totaling $3.6 million. Topilin attributed the increase to Russia exporting more flour, sunflower oil and construction materials.

Lavrov has voiced hope for closer bilateral relations with Ramallah. He referred to potential trade in a range of agricultural projects and implementing joint ventures in industrial zones in Bethlehem and Jericho, in the West Bank. He believes that the Eurasian Economic Commission’s decision last year to extend tariff preferences to Palestine will result in stronger economic ties and increasing trade.

Moreover, Lavrov mentioned the increasing number of Russian tourists, including pilgrims, visiting the holy places in Palestine. “Last year, 360,000 Russian citizens went to Palestine and, above all, to the holy sites, a nearly 20% increase from the previous year,” Lavrov said. Solidifying gains in trade and tourism, however, will require durable peace and stability. Lavrov recalled Moscow’s initiative from 2016 to host a meeting between Palestinian and Israeli leaders. The proposal has not been withdrawn, but Israel sees no reason to pursue it at this point.

First, Israeli leaders today view direct talks with the Palestinian leadership as unnecessary in light of the expectation of the United States unveiling a new peace plan. The much-touted plan is much in doubt by many Arabs, who expect it to favor Israel. Second, the Israelis think Moscow is biased in favor of the Palestinians when it comes to the conflict. This perception was not helped when on Dec. 6 Russia voted against a US-sponsored resolution in the UN General Assembly to condemn Hamas for firing rockets at Israel.

At the official level, however, Israel decided against publicly condemning the Russia vote, coming as it did amid the two countries' fragile relations stemming from an incident in September when Russia blamed Israel for Syria accidentally downing a Russian military aircraft, killing 15 people. The plane was hit during an Israeli aerial attack near Latakia. Dec. 26 brought a new round of criticism from Russia following an Israeli air strike on Damascus that Moscow said endangered civilian flights trying to land in Damascus and Beirut.

In November, Israeli Prime Minister Benjamin Netanyahu and Russian President Vladimir Putin met briefly in Paris at a World War I-related event. About a week before Lavrov spoke with Maliki, the Russian foreign minister had hosted Jewish Agency Chairman Isaac Herzog in Moscow. While there, Herzog delivered an invitation to Putin from Israeli President Reuven Rivlin about a visit to Jerusalem in 2020, during a conference dedicated to the 75th anniversary of the liberation of Auschwitz from the Nazis by Soviet troops. The occasion itself and Putin’s focus on acknowledgment of the Soviet role in World War II would make it difficult for the Russian president to decline the invitation.

At Lavrov's meeting with Maliki, the Russian foreign minister voiced his readiness to organize talks in Russia between the rival Palestinian parties. Even if such talks were to take place, they would be quite challenging, as evidenced by Cairo not being able to get Hamas and Fatah to respect past reconciliation agreements. Moscow is unlikely to suggest anything different from what Egypt has already tried.

Moreover, Russia has no intention of bearing the brunt of sole responsibility for any inter-Palestinian or Israeli-Palestinian settlement. Rather, Moscow stands in solidarity with Cairo — with which Moscow sees eye to eye on much of the Middle East — and wants to keep abreast of developments in the region's various conflicts and maintain relations with all parties. Russia clearly understands that progress necessitates Palestinian unity, a point Lavrov reiterated to Maliki.