Why Iran wants Hamas to apologize

Hamas representatives remain busy trying to repair relations with Egypt and Iran while not offending anyone in the Gulf. 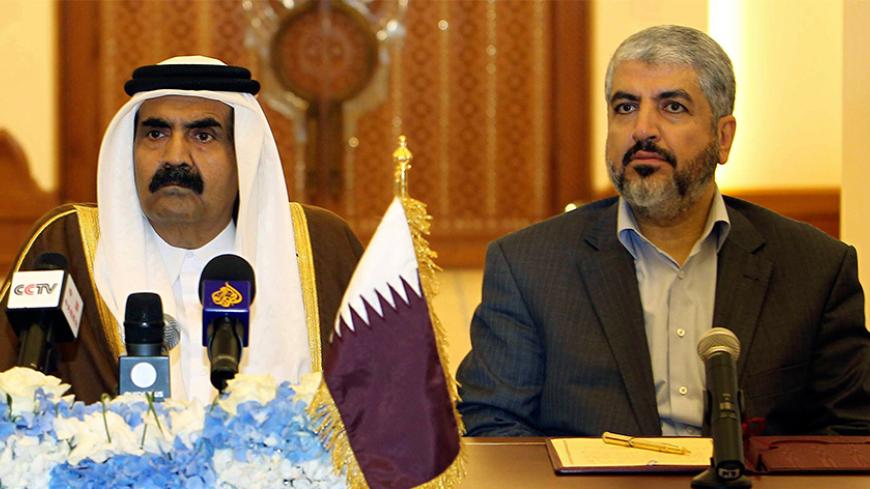 Like a whirling dervish seeking God’s mercy, the Palestinian Hamas movement continues to circle around the Middle East in search of solutions to its complicated problems. From Cairo to Doha to Tehran, each trip has its special purpose, yet all are the same when it comes to having to make decisions.

“After the Arab Spring, the decision-making process in our movement became complicated,” a Hamas official told Al-Monitor speaking on condition of anonymity. “We are at the mercy of geography [because Hamas officials are dispersed], ideology and financing. Therefore, on several occasions, our stances stir controversy. If Iran is happy, that means the [Muslim] Brotherhood might have reservations, and if Turkey and Qatar are OK with a move, then we wait for condemnation from Beirut or Damascus.”

“This was the first meeting with the Egyptians in months,” the Hamas official told Al-Monitor. “There are a lot of differences between us, and the meetings were [geared] toward discussing them. It’s not only about requests to reopen the Rafah crossing. We have four men missing after being abducted in Egypt months ago, and we need to know what happened to them. The Egyptians also have some requests related to the situation in the Sinai.”

Al-Monitor has learned that the Egyptian requests included the handover of wanted persons currently in Gaza, in particular Mumtaz Dughmush, whose name is at the top of the list. Dughmush heads the radical group Jaish al-Islam and has been added to the US State Department's terrorist list. Egypt accuses Dughmush of involvement in several attacks in Egypt and affiliation with the Islamic State’s Sinai branch. Egyptian security officials who met the Hamas delegation additionally requested coordination on the situation in Sinai and the border while also hoping that Hamas will distance itself from the Muslim Brotherhood.

“Our people told the Egyptians that Dughmush isn’t someone whom we can arrest and hand over so easily,” the Hamas official said. “This would cause a big problem in Gaza.” He added that the Palestinian delegation had made it clear to the Egyptians that there is nothing on which Hamas can coordinate in regard to intelligence in Sinai because of the movement’s limited capabilities, which are invested in Gaza.

“We were clear that Hamas won’t allow any kind of threat to Egypt’s security from our soil. We’ll make sure none of those fighting in Sinai will take refuge in Gaza,” the official remarked. “This was a kind of compromise that helped us and the Egyptian side agree on having a three-month ‘media truce’ during which neither Hamas nor the Egyptians will launch media campaigns against the other, then a six-month confidence building track, and then we’ll start serious political engagement.”

Al-Monitor also learned that at the beginning of the talks, the Egyptians imposed the condition that before any serious engagement, the situation in Gaza must return to what it was before June 2007, when Hamas seized control of Gaza. Not surprisingly, the movement did not welcome this condition, making it clear that the governance of Gaza should be left to talks between Hamas and Fatah, which are already being arranged.

“Hamas’s main concern in this regard is the thousands of public servants recruited in Gaza and whom Fatah until now does not want to accept as part of the government,” the Hamas official said. “There were attempts by some allies of Egypt to distort the talks, primarily one Gulf country. Yet that did not succeed, as the Egyptians were very committed to a good conclusion.”

While talks were taking place in Egypt, other Hamas officials were preparing for a visit to Doha and a subsequent trip to Tehran. The visit to Doha had already been planned and authorized at a leadership meeting, as was a new round of reconciliation talks with Fatah. The Doha meetings, according to Al-Monitor’s source, were productive, but, he also said, “There was nothing significant. There’s nothing new, as we still have the same consensus on a national unity government and elections, but it’s still the same problem over the public servants that Hamas appointed during Ismail Haniyeh’s government. Fatah does not want to accept them in the government.”

The Hamas leadership meetings were to discuss challenges facing the movement and upcoming elections, which are expected to usher in a new head of the political bureau to replace Khaled Meshaal, who is ineligible for another term. Relations with Iran were also on the agenda given the February visit of a Hamas delegation to the Iranian capital that produced an agreement between the two sides to enter a new era in relations based on new rules.

The delegation to Tehran met Gen. Qasem Soleimani, commander of the Quds Force, the Islamic Revolutionary Guards Corps’ foreign operations branch. Soleimani advised the movement to keep its distance from all the chaos in the region and pledged Iran’s continued support, although Abu Marzouk in a leaked phone call accused Iran of lying about its claims of supporting the movement.

Marzouk’s accusation prompted Soleimani to say at the meeting, “Iran never lied, and we won’t lie. We sent several ships full of arms to the resistance, [but] some were intercepted. We won’t leave you alone. Whenever there’s a new technology that we can send, we won’t hesitate to. This is our duty. Whoever says the contrary should remember that this is all [taking place] before God’s eyes.”

An Iranian military source told Al-Monitor on condition of anonymity that Abu Marzouk has tried to contact Tehran to arrange a visit for the Hamas delegation set to travel from Cairo to Doha, but the Iranians have responded in the negative — not to the delegation, however, but to Abu Marzouk.

“If he’s sure he wants to come to Tehran, then he has to apologize,” the Iranian source said.