Deputy head of Hamas’ political bureau Mousa Abu Marzouk told Al-Monitor that Hamas does "not interfere in Egypt's security affairs" and said some countries had contacted the movement to discuss a prisoner swap deal with Israel. 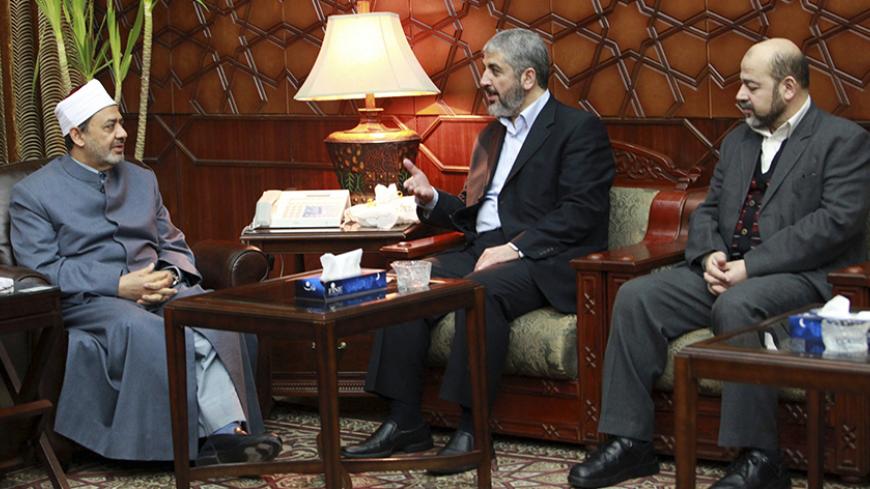 GAZA CITY, Gaza Strip — In a phone interview with Al-Monitor, deputy head of Hamas’ political bureau Mousa Abu Marzouk revealed that some countries — without specifying which ones — had contacted the movement to discuss the issue of Israelis being detained in Hamas jails. According to Abu Marzouk, the movement stressed that Israel should respect the 2011 Gilad Shalit prisoner exchange deal first by releasing about 50 Palestinians it rearrested after freeing them as per the deal, before Hamas could talk to mediators about releasing new Israeli detainees.

Speaking about the Hamas delegation’s latest visit to Cairo Jan. 23, Abu Marzouk said the topics discussed were mostly related to the Palestinian internal reconciliation, the political situation in the region, the international situation, US policy toward the Palestinian cause and the Rafah crossing. The delegation also talked about Egypt providing the Gaza Strip with its various needs, including electricity. He said that Hamas is currently on good terms with Egypt.

Abu Marzouk was born on Feb. 9, 1951, in the city of Rafah in southern Gaza, and he currently resides in Qatar. He is married and has six sons. He received a doctorate in industrial engineering from Louisiana Tech University in 1992 and during his stay in the United States, he contributed in founding several institutions and committees to help the Muslim diaspora in the United States and promote the Palestinian cause, such as the Islamic Center of Fort Collins, Colorado.

Abu Marzouk was one of the founders of the Hamas movement in 1987 and served as the first head of its political bureau in Jordan in 1992 after returning from the United States. He was expelled by the Jordanian authorities in 1995 after Hamas’ office in Amman was shut down. He returned to the United States where he was arrested by US authorities in July 1995 and detained for 22 months with no formal charges placed against him. In 1997, he was released and deported by US authorities to Jordan, after which the latter expelled him again in 1999. He then settled in Syria for a while before moving to Qatar.

Al-Monitor:  How do you assess Hamas’ relationship with Egypt? What were the issues discussed during the Hamas delegation’s visit to Egypt on Jan. 23?

Abu Marzouk:  We are on good terms with Egypt. We have overcome most thorny issues that disrupted constructive communication between us in the past. This reflected on the political and media discourse on the Egyptian part, as well as the ever-improving policies adopted on the ground. We also discussed the [Hamas-Fatah] reconciliation, the political situation in the region, the international situation, US policy toward the Palestinian cause, the Rafah crossing and providing Gaza with its various needs, including electricity.

Al-Monitor:  On Jan. 26, Egyptian newspaper Gate Ahram quoted you as saying [article has been removed since] that a joint security committee had been formed between Egypt and Hamas to hand over some wanted individuals in Gaza. Is this true? Does this mean you accept security cooperation with Egypt against the Islamic State in the Sinai Peninsula?

Abu Marzouk:  I will tell you the same thing I told Gate Ahram. It is not in our best interest to harm the Egyptian security when we are suffering from the situation in Sinai more than Egypt is. The Egyptian security authorities gave us documents about wanted individuals in the Gaza Strip, whose number is not significant, and handing them over is [so far] out of the question. However, security officials in Gaza will meet with their Egyptian counterparts to study each case individually.

On that note, we do not interfere in Egypt’s security affairs in any way. The Gaza Strip will not be a place of refuge or passage for individuals who aim to harm Egypt. Our weapons are only pointed at the occupation, and we have no interest in changing this policy.

Al-Monitor:  Has any international party contacted you regarding the bodies of Israeli soldiers and detainees held in your prisons during the 2014 war on Gaza? What are your conditions to start negotiating a prisoner exchange deal?

Abu Marzouk:  Indeed, a number of countries contacted us in this regard and we made it clear that Israel should respect the Gilad Shalit prisoner exchange deal first before we can start negotiating a new one with any mediator. There is no point in concluding new deals if the previous ones are not respected.

Abu Marzouk:  We hope so. We support forming a government of national unity because it is crucial for holding presidential, local, parliamentary and Palestinian National Council [PNC] elections. We need one government to oversee both the Gaza Strip and the West Bank [as Hamas considers the 2014 consensus government to be biased and controlled by President Mahmoud Abbas]. We need a unified judiciary, a unified law and unified institutions. We are well-aware that the elections are the base of reform and vitality within the PNC in its new form, which should include all the components of the Palestinian people.

Al-Monitor:  What do you think about Minister of Local Government Hussein al-Araj announcing that the local elections will be held in May 2017 without consulting with all factions first?

Abu Marzouk:  He has no right to do this and he will not succeed in doing what he intends to do. The [Ramallah] government had already started [preparing] to hold elections but did not go through with them, so why insist on failed attempts? Everyone should participate in fixing the Palestinian internal situation; we should achieve national unity and end the division first, and then we can move to other issues.

Al-Monitor:  How does Hamas perceive the new US administration headed by Donald Trump?

Abu Marzouk:  The new US administration’s duties have just begun on Jan. 20 and its policies are yet to tackle the Palestinian cause. We cannot judge how its policies would be based on the electoral campaigns. President Trump’s commitment during his electoral campaign to move the US Embassy from Tel Aviv to Jerusalem is now less apparent. Hamas would rather wait and see how Trump will handle the Palestinian issue before judging him and his policies. However, some recent appointments in Trump’s team warn of future problems and a tendency to lean more toward [Israel], which means the United States cannot be a fair mediator.

Al-Monitor:  Will Khaled Meshaal, the head of Hamas’ political bureau, occupy a [new] position in the movement following the movement’s internal elections that started Feb. 3?

Abu Marzouk:  Hamas has always held its internal elections every four years. These elections take time, but it is only normal since we [the movement’s leaders] are in different countries and it is not so easy to communicate with one another.

As for Meshaal, even if he is not present in person, he will always have a role. He is present at the core of the movement, its councils, leaderships and his contributions will never disappear nor will his efforts ever be in vain.

Al-Monitor:  How would you describe your relationship with Iran? Will [senior Hamas leader] Ismail Haniyeh or Meshaal visit Tehran anytime soon?

Abu Marzouk:  There are no arrangements for a visit, but our relationship with Iran is good and always improving.