The return of Hamas leader Mousa Abu Marzouk to the Gaza Strip signals the return of Egypt as a broker in Palestinian politics. 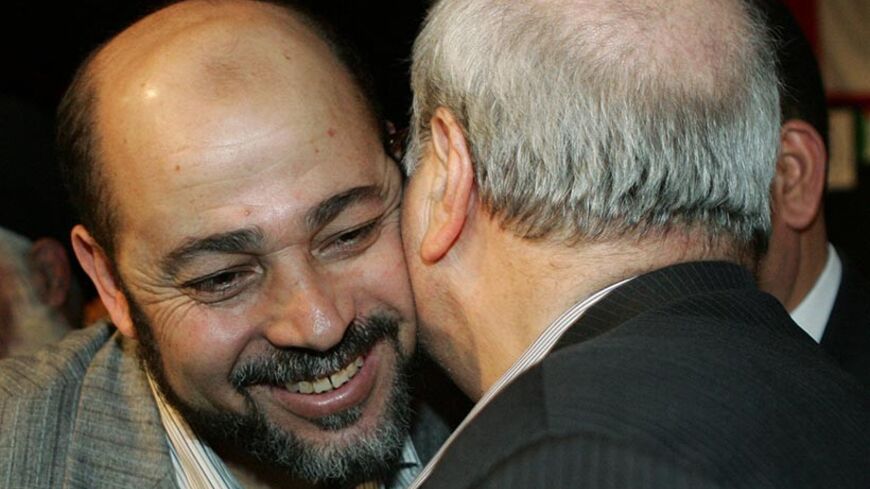 Mousa Abu Marzouk (L), a member of the Hamas political bureau, embraces Farouk Kaddoumi, Palestinian head of the political department of the PLO in Damascus, May 12, 2006. - REUTERS /Khaled al-Hariri

News on the Palestinian reconciliation front has taken a positive turn. The first practical steps will feature the creation of a technocratic government responsible for civil affairs in the West Bank and the Gaza Strip. This development promises to open a new chapter not only in Palestinian governance but also on the diplomatic playing field between Israel and a revitalized Palestinian Authority (PA).

Success always has many authors, but in this case progress on the reconciliation file is the product of an unusual convergence of interests of all the major parties — the Palestinians first and foremost, but also the unlikely trio of Egypt, Israel and the United States. Mousa Abu Marzouk, Hamas’ number two political leader and head of the movement’s reconciliation delegation, is at the center of this circle. His all-but-permanent presence in Gaza is a clear reflection of the wide-ranging support of this unusual coalition for a historic Palestinian rapprochement.

Abu Marzouk has long led Hamas’ reconciliation delegation alongside Fatah’s Azzam al-Ahmad. His active leadership in Gaza of top Hamas officials, notably Ismail Haniyeh, the prime minister of the Gaza rump of the PA, offers demonstrable evidence of the leading role that Hamas’ exiled leadership is exercising over the reconciliation file. Marzouk’s interest in returning to Palestine is self-evident, but until this round of reconciliation efforts, there was no practical political need for his extended presence there.

Lest it be forgotten, no one moves into and out of Gaza these days without the explicit knowledge and approval of Egypt, which governs access from the south through the Rafah terminal, and of course Israel, which controls movement and access through the Erez crossing in the north. It is Israel, however, that retains the power of life and death over Hamas officials in Gaza.

In the past, Israel had refused to consider granting Hamas political bureau chief Khaled Meshaal permission to make more than a cursory visit. Why then would Israel agree now to honor Abu Marzouk’s interest? Abu Marzouk, enemy of Israel and certified terrorist, has sojourned for close to a month in Gaza under an Israeli pledge of good conduct. How can one explain the Netanyahu government’s guarantee to Marzouk and to Cairo that he would not meet the fate of Sheikh Ahmed Yassin and so many others at Israel’s hand? Assuming that Marzouk’s presence, as well as his long history of dialogue with Fatah’s Ahmad, increases the prospect of progress on the reconciliation file, why should Israeli Prime Minister Benjamin Netanyahu see value in abetting this process?

Egypt too has played a central role in this intriguing aspect of the current Palestinian dialogue. It is no secret that there is no love lost these days between Hamas and Egypt’s old-new leadership. A judicial decision has outlawed the group, and Marzouk has moved out of his old offices in Egypt. Clear decisions, however, are rarely taken in Egypt today. Marzouk has simply moved to a nearby, almost identical mini-mansion in a new Cairo suburb. His staff remains in place, and he maintains his key role as Hamas’ envoy to Egypt with a mandate to take the edge off Egypt’s bitter estrangement. “Is there any sane person who believes that Gaza people are hostile to Egypt, which is their sole outlet to the outside world,” he was reported asking in a post on his Facebook page.

Egypt has welcomed the joint, two-part reconciliation agreement. It supports a Palestinian government of independent technocrats and new elections under President Mahmoud Abbas’ leadership as a way of taming Hamas’ independence. Marzouk, and his presence in Gaza, represents Egypt’s bet in this direction. “I call on Hamas to rehabilitate its relations with Egypt before it loses the affection of the Egyptian people once and for all,” suggested Gen. Abdel-Fattah al-Sisi in a recent interview on Egyptian television.

Nonetheless, since President Mohammed Morsi’s ouster last summer, Egypt has reduced its engagement in the Palestine file, traditionally managed by very well-informed General Intelligence Service (GIS) officials. Such a retreat signifies a significant change in Egypt’s role in all things Palestinian and is probably the product of the general institutional disarray and bureaucratic upheaval that is certain to challenge the new Egyptian president after elections later this month. “GIS is out of [the reconciliation effort],” explained a well-informed Egyptian. “It is watching, not orchestrating.”

Israel, too, has exhibited surprising support for Abu Marzouk’s mission. One top Egyptian diplomat acknowledged that he finds Israel’s motives concerning Abu Marzouk intriguing. “Israel has an interest in seeing how the reconciliation process evolves,” he said. “It also signals to Ramallah that Israel has other options [than supporting Fatah’s PA] by letting Marzouk into Gaza.”

Israel has in fact let Hamas’ top leadership play in Gaza in the past. Abu Marzouk himself made a lightening visit in 2009 in connection with discussions about Gilad Shalit, the Israeli soldier kidnapped and held in Gaza. In 2012, Meshaal visited Gaza, with Israel’s approval, in what he triumphantly described as his “third birth,” as part of still-relevant cease-fire arrangements.

Israel’s current assent to Abu Marzouk’s extended presence in Gaza must be viewed as a demonstration first and foremost of its continuing interest in Hamas’ commitment to the stand-down. Netanyahu has been an outspoken opponent of Abbas’ reconciliation efforts, but his security establishment, which remains committed to the cease-fire, educated him and his fire-breathing colleagues about the value of stability in Gaza that Hamas is pledged to uphold.

One well-informed Israeli said, “It was quite telling that just as Bibi [Netanyahu] blasted Abbas for step one on reconciliation, the senior-most IDF [Israel Defense Forces] commander responsible for Gaza went on the air with 'if this leads Hamas away from armed struggle and on the road to a political path, of course I welcome it.'”

Netanyahu must also pay close attention to Washington’s “glass half full” response to Abbas’ efforts. US backing for Abu Marzouk’s role in Gaza is a necessary part of this. Washington, it will be remembered, also supported Meshaal’s triumphal return to Gaza to seal the 2012 cease-fire.

Marzouk’s presence in Gaza also attests to continuing close coordination between Israel and Egypt, not only operationally regarding Gaza (and the Sinai Peninsula) but also politically. “Netanyahu has an interest in respecting the Egyptian effort,” explained a well-informed Israeli, “where Abu Marzouk effectively serves as Cairo’s man in Gaza. “The surprising turn of events,” the Israeli continued, “started when Abu Marzouk showed up in Gaza with a message [to Hamas’ Gaza leadership] from Sisi: Your only salvation is under the wings of Abu Mazen.”