Hamas leaders have thrown their full support behind the reconciliation deal with Fatah, hoping it will end their isolation and Gaza’s crippling siege. 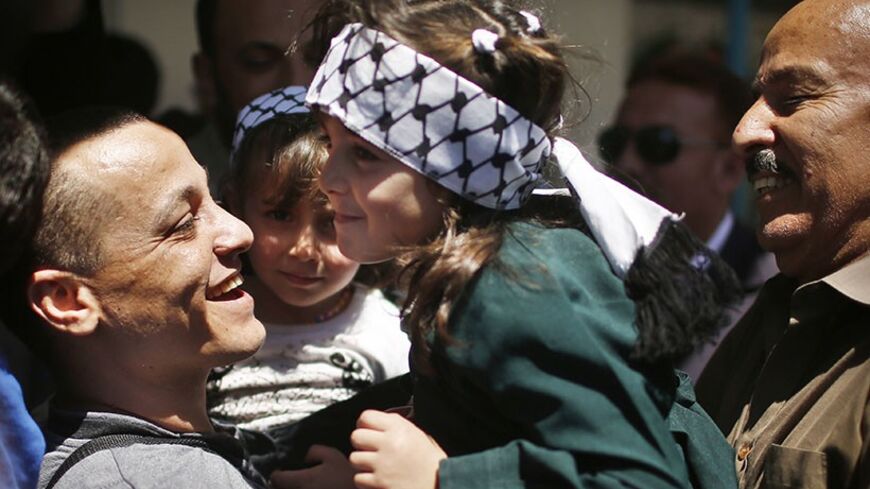 A Palestinian Fatah member holds his daughter after his release from a Hamas-run prison in Gaza City, April 21, 2014. - REUTERS/Suhaib Salem

GAZA CITY, Gaza Strip — The Palestinians in the Gaza Strip rejoiced on April 23 after Fatah and Hamas signed a reconciliation agreement, hoping this time will be different. Previous agreements, including the latest in Doha in 2012, have produced little progress.

The positive atmosphere was evident, accompanied by a number of signs of strengthening reconciliation efforts on the ground. One such indication was Hamas’ release of 10 Fatah-affiliated detainees who had been accused of security violations.

A delegation of leaders from the Palestine Liberation Organization (PLO) led by Azzam al-Ahmad, Fatah’s official in charge of reconciliation efforts, arrived in Gaza on April 22. They held shuttle talks with Hamas, headed by Prime Minister Ismail Haniyeh.

A key interest for Hamas in the reconciliation deal is ending its crippling isolation, according to a Hamas leader who participated in the reconciliation efforts. He told Al-Monitor, “The living conditions in Gaza have reached an unprecedented level of suffering, and there is no light at the end of the tunnel with regard to the deteriorating relationship with Egypt. This has sped up the reconciliation. [Hamas] is hoping that this reconciliation with Fatah will rekindle ties with Cairo, or at least put an end to the prevailing tension.”

The leader, who spoke on condition of anonymity, added, “The reconciliation with Fatah will allow Hamas to fulfill a desire to which it openly admits: Hamas wants to liberate itself from the regional and international isolation it has been experiencing since the fall of [former President Mohammed] Morsi in Egypt in July 2013 and the subsequent regional crackdown on the Muslim Brotherhood. This would increase its chances for promoting its legitimacy internationally and would facilitate its public events in the West Bank, because the reconciliation will coincide with the release of Hamas detainees in the Palestinian Authority’s [PA] prisons.”

Perhaps Hamas was shocked that Egypt allowed Mousa Abu Marzouk, the deputy chairman of Hamas’ political bureau, to enter Gaza on April 21. Marzouk’s participation in the reconciliation efforts gave a great push for ending the division quickly, setting a date for the elections and forming a unity government.

Al-Monitor learned that Nasser al-Shaer, a moderate Hamas figure in the West Bank, is among those who played a pivotal role in reaching an agreement. Shaer was the deputy prime minister of the PA government of 2006, and enjoys warm ties with President Mahmoud Abbas.

Meanwhile, Mohammed Dahlan, the enemy of both Abbas and Hamas, seems to be absent from the reconciliation process. Surprisingly, Hamas announced that it had arrested a militant cell affiliated with Dahlan that had launched missiles at Israel on April 21, in an alleged attempt to ruin reconciliation efforts and trigger an Israeli escalation against Gaza.

Al-Monitor attended part of the reconciliation talks, which started on the evening of April 22 and lasted until dawn, and interviewed a member of the PLO delegation from the West Bank who spoke on condition of anonymity.

When asked about the difference between this reconciliation and previous ones, the PLO delegate replied, “We came from the West Bank because we realize how important it is to reach a reconciliation. Otherwise, the alternatives will be disastrous for all Palestinians, including Fatah and Hamas.” The PLO source was referring to the meeting of the PLO’s Central Council on April 26, during which the general elections in the West Bank would have been announced without the participation of Gaza, if reconciliation with Hamas was not reached.

“Abu Mazen [Mahmoud Abbas] sent us to Gaza, and he is very serious about achieving reconciliation this time, because he intends to rearrange the constitutional institutions, including the presidency and the legislative and national councils. He also wants to end his political career, and he might withdraw from the political scene before the end of the year. The leadership of Hamas is convinced that he is in the midst of a true crisis with Israel, and Hamas does not want to appear as if it abandoned him in this fateful confrontation,” the official added.

Al-Monitor has learned details of the talks that took place between the Fatah and Hamas delegations at Haniyeh’s residence. Meshaal and Abbas were following up on the talks over the phone with Doha and Ramallah.

Al-Monitor also learned from an Egyptian official well-informed on the reconciliation file that the arrival of Abu Marzouk to Gaza also contributed to the success of the negotiations. According to the official, who spoke on condition of anonymity, Abu Marzouk has a significant impact on the leadership of Hamas since he has Gazan origins and historic personal relationships with Hamas leaders. He is seen as the deputy of Sheikh Ahmed Yassin, who founded the movement in the 1990s. He also represents Hamas’ leadership abroad and agrees with Meshaal on the need to achieve reconciliation.

Public pressure by civil society on Hamas and Fatah also contributed to the success of the reconciliation. The Palestinian public has been demanding that both sides overcome the obstacles that have prevented the holding of national elections and unite the national institutions.

The reconciliation agreement was swiftly signed just a few hours after the start of the talks, as most of the issues were previously agreed upon and did not need further discussion, especially when it came to setting the dates of elections, which were scheduled to be held six months following the formation of the government. The powers of the president were also determined after consultation with the factions. The consensus government will be charged with dealing with the issue of public liberties, political prisoners, the work of the Legislative Council and societal reconciliation.

Al-Monitor obtained a copy of the final statement of the reconciliation agreement, which was read by Haniyeh during a press conference on April 23 and signed by all the Palestinian leaders present.

However, the final statement failed to address a significant issue: the weapons of the Izz ad-Din al-Qassam Brigades. Al-Monitor learned that both parties feared that addressing this issue now would impede the negotiations, so they agreed to remove it from the agenda.

Palestinians are pinning their hopes on an actual reconciliation between Fatah and Hamas this time, and they hope that the reconciliation process will move to actual implementation instead of remaining mere signatures. Until then, they're holding their breath.

by Murielle KASPRZAK and Joseph SCHMID | AFP | May 26, 2022
END_OF_DOCUMENT_TOKEN_TO_BE_REPLACED