The Obama administration is denying a BuzzFeed report of a back channel to Hamas while also resisting pressure from Congress to cut off aid to the Palestinian Authority after the unity agreement. 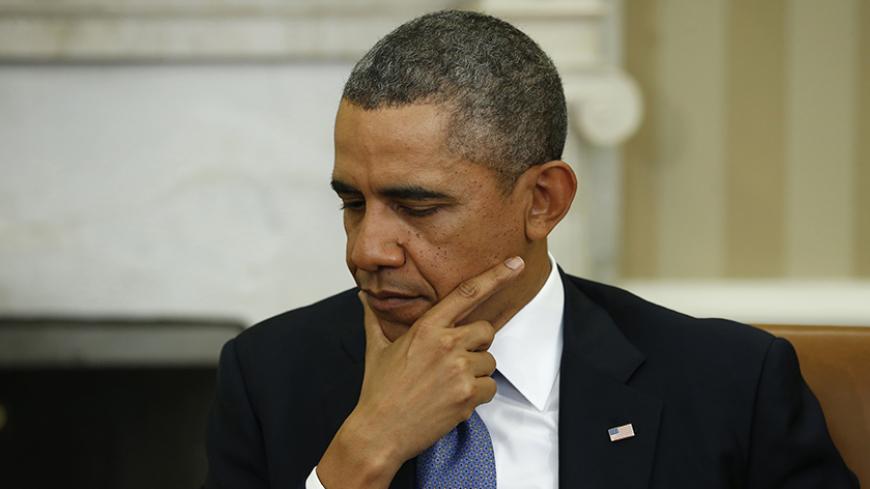 US President Barack Obama listens to remarks during his meeting with Palestinian Authority President Mahmoud Abbas at the White House in Washington, Mar. 17, 2014. - REUTERS/Kevin Lamarque

The news website BuzzFeed reports that the United States held secret talks with Hamas for the past six months to discuss maintenance of the Palestinian movement’s cease-fire with Israel and the formation of the recently announced Palestinian government.

"Our administration needed to hear from them that this unity government would move toward democratic elections, and toward a more peaceful resolution with the entire region,” noted the report, quoting a US official. "It was important to have that line of communication."​

The State Department denies that Washington has broken its self-imposed boycott of talks with Hamas, which is listed by the US as a foreign terrorist organization.

“These assertions are completely untrue,” spokeswoman Marie Harf told BuzzFeed. "There is no such back channel. Our position on Hamas has not changed.”

Well-informed sources in the region are skeptical that currently serving US officials have met with official Hamas representatives.

“I doubt it,” explained one top-level security official in Cairo. “This is my personal assessment. Perhaps through the Carter Center, yes, but a direct dialogue, this could not be.”

The United States has never lacked for access to authoritative information about Hamas. Over the last decade, a parade of American interlocutors, including the author, have sought to keep US officials — some more interested than others — appraised of Hamas’ take on events. Secretary of State Hillary Clinton herself played a leading role in discussions that resulted in a cease-fire agreement between Israel and Hamas after Operation Pillar of Defense, announcing, along with then-Egyptian Foreign Minister Mohamed Kamel Amr, the truce between Israel and Hamas in Cairo on Nov. 21, 2012.

Washington’s cautious endorsement earlier this week of the joint effort by Hamas and Fatah to form a government to administer parts of the West Bank and Gaza Strip offers the best evidence that Hamas’ ostracism is ending.

Endorsements of the new Palestinian government came in thick and fast from around the world, with Russia, China, India, Turkey, France and the United Kingdom expressing their support. The European Union and the United Nations added their approval for good measure.

The reason for the international embrace of Palestinian reconciliation, in contrast to previous stillborn efforts, is the absence of a US-supported diplomatic alternative. Today, there is no prospect of what US officials used to call a “political horizon” to focus hope for a peace deal. Therefore its corollary — opposition to a deal between Fatah and Hamas — has become passé. The Palestinian effort now commands international attention and support. With or without the United States, this train had already left the station.

Palestinians, too, have learned something in the last decade. Abu Mazen (Palestinian President Mahmoud Abbas) and Hamas, in contrast with previous attempts to heal their rift, are now pushing all the right buttons, notably the new government’s endorsement of the long-standing international demand that any Palestinian government embrace the three Quartet principles: nonviolence, recognition of Israel and support for previous agreements.

These demands were originally devised to scuttle Hamas' electoral victory in January 2006 and to obstruct reconciliation. Now both Abu Mazen and Washington are invoking them to facilitate and enable broad international support for the new government.

There is now an international consensus, including the United States, to use Quartet demands to legitimate and inoculate the new Palestinian government, and by doing so, turn the tables on the Quartet demands’ original authors and others who oppose strengthening the ability of Palestinians to press claims against Israel.

The same strategy will be used by the Barack Obama administration to avoid imposing congressionally mandated penalties on the Palestinian Authority for the sin of dealing with Hamas.

"It is not a government backed by Hamas," said deputy spokesperson Marie Harf in a press briefing. "There are no members of Hamas in the government."

Washington, in a change from past policy, now views reconciliation as an instrument to increase Fatah's advantage over Hamas.

“The administration believes that Abbas’ main motivation for advancing the talks with Hamas was not to achieve a reconciliation but to fortify his own leadership position at a time when Hamas is ‘on the ropes,’” according to Haaretz, summarizing the view of US National Security Council Middle East coordinator, Philip Gordon. “Abbas seized on an opportunity to strive for an agreement — both with Hamas and with Israel — from a position of strength,” said Gordon.

Israeli Prime Minister Benjamin Netanyahu yet again finds himself at odds with the Obama White House. He pronounced himself both "deeply disappointed" and "deeply troubled" by the US decision. Others in his entourage were less diplomatic. An Israeli official was quoted by Israel Hayom as saying the US action was "like a knife in the back."

Netanyahu’s opposition to Abu Mazen’s successful moves can be taken for granted. But it is also increasingly the case that Washington will not be deflected by Israeli objections from its support for Abu Mazen’s effort.

As Al-Monitor has reported, Netanyahu can be expected to mobilize Congress to make life difficult for Obama and the Palestinian Authority.

But the Obama administration will argue that the new Palestinian government meets the many tests Congress itself has established for US support. The State Department has already revealed the line the administration will take with Congress in this regard, describing the new Palestinian leadership as an "interim technocratic government that does not include ministers affiliated with Hamas."

Congressional opposition notwithstanding, the Obama administration remains cautiously committed to this new experiment in Palestinian governance.

If the State Department prefers to close its eyes to the fact that the Hamas leadership supports the new government, more power to the department. From Syria to Afghanistan, the United States does not have the luxury of choosing the enemies who sit across the negotiating table. If there is indeed a back channel between Washington and Hamas, it would not be the first time that being smart made for better policy than being right.