Will Abbas sever ties with Hamas for good?

Tensions between Fatah and Hamas are escalating in light of recent accusations against President Mahmoud Abbas of monopolizing the decision-making process and making one-sided decisions. 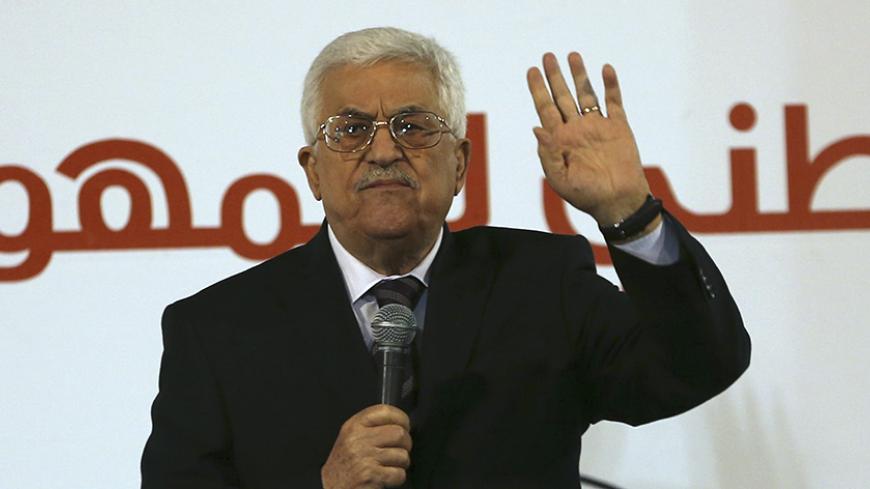 Tensions between Fatah and Hamas have been increasing daily, in light of security measures taken by Fatah's Palestinian Authority (PA) in the West Bank since early July, such as the arrest and summoning of Hamas activists. And in early August, Hamas made serious statements against Palestinian President Mahmoud Abbas.

In an Aug. 12 press statement, Mahmoud al-Zahar, a member of Hamas’ political bureau, ruled out a reconciliation between those who fight Israel (meaning Hamas) and those who cooperate with it (referring to Fatah) and said Abbas would lose any future elections. Zahar did not name either Hamas or Fatah directly, however.

Zahar charged Aug. 4 on Al-Aqsa TV that Abbas “has become a burden on the Palestinian people.” Zahar called on Palestinians to take to the street to demand Abbas' departure.

On July 31, Mousa Abu Marzouk, deputy head of Hamas’ political bureau, accused Abbas in a Facebook post of making one-sided decisions and blamed him for the crisis resulting from the absence of reconciliation prospects between Fatah and Hamas. Marzouk added that Abbas is making unilateral decisions within the Palestine Liberation Organization (PLO), Fatah and the PA, and whoever opposes him is being dismissed from these institutions; thus, no one dares to speak against him.

Hamas spokesman Sami Abu Zuhri told Al-Monitor, “The [Cabinet] reshuffle turned the Palestinian government into a separatist government, because the reshuffle is unconstitutional and is not in line with [the foundations of] the consensus. Hamas will not acknowledge this one-sided decision.”

During an Aug. 1 press conference, Palestinian factions — including Hamas, the Islamic Jihad and Al-Ahrar movement — rejected Abbas' Cabinet change, describing it as a coup against reconciliation and a reflection of Abbas’ insistence on a policy of exclusion and marginalization.

It seems clear that the Cabinet change was the final nail in the coffin of any possible reconciliation between Fatah and Hamas. Abbas could have consulted Hamas on the minor changes, without the need to overstep and act as if the government belonged to him alone, knowing that the same government was the result of his consensus with Hamas.

Fatah launched a fierce media offensive against Hamas in early August after leaks about an imminent announcement of a truce agreement between Hamas and Israel to lift the siege on Gaza.

Abbas attacked the indirect truce negotiations between Hamas and Israel during Fatah’s Advisory Council meeting July 23 in Ramallah and described them as “suspicious projects,” because they would set up a temporary state in Gaza and separate the Strip from the rest of the Palestinian territories.

In an interview with Al-Monitor, Yahya Moussa, a Hamas leader and chairman of the PLO’s Oversight and Human Rights Committee, called for what he described as “a total estrangement with Abbas and his political approach.”

“The Palestinians should look at the Gaza Strip as a land liberated from Israeli occupation, and we should launch a collective Palestinian dialogue on a national document that would be submitted to a referendum to determine the PA’s fate and choose a new leadership for the Palestinian people.”

Hamas is apparently moving forward with the truce agreement with Israel without waiting for Abbas’ approval, even though it has not declared so officially. On Aug. 12, Hamas held an emergency meeting in Gaza headed by Imad al-Alami, a member of its political bureau, for most of the Palestinian factions to discuss the latest regional and international mediation effort to clear the air with Israel. Hamas has not yet presented any official initiative to the factions.

On Aug. 16, Fatah issued a harsh statement against Hamas in which it opposed the truce agreement.

Perhaps what further angers Fatah leaders is that they feel shut out of the truce agreement taking shape between Hamas and Israel, with the help of Qatar, Turkey and Tony Blair, the former international Quartet (United States, European Union, United Nations and Russia) envoy.

Fatah spokesman Osama al-Qawasmi said in press statements Aug. 15 that Hamas has overstepped Fatah and only consulted Palestinian factions in Gaza. This increases Abbas’ isolation and diminishes the possibility of Gaza being under the PA’s control again, which decreases Fatah’s influence on the Palestinian arena and might favor Hamas.

Tension between Hamas and Fatah was not limited to media statements. It coincided with continuation of the PA’s arrests of hundreds of Hamas cadres in the West Bank since early July. The PA’s measures also included torturing Hamas members, according to an Aug. 16 statement issued by the Committee for the Families of Political Prisoners in the West Bank.

Ismail al-Ashqar, a Hamas leader and head of the PLO’s Interior and Defense Committee, condemned in an interview with Al-Monitor what he described as “a campaign of fierce political arrests launched by [PA] security services in the West Bank against Hamas members, because they are causing the current deterioration of the internal Palestinian relations, and Abbas bears responsibility for these arrests’ serious repercussions.”

The political arrests of Hamas members in the West Bank prompted the PLO in Gaza to hold a special session July 29 in the parliament building in Gaza, which Al-Monitor attended.

In an interview with Al-Monitor following the special parliamentary session, Ahmed Bahar, the PLO’s first deputy chairman, denounced what he called “the political arrest policy practiced by the PA’s services in the West Bank against Hamas activists.”

“It is an immoral and unpatriotic policy that comes in the context of the security coordination, in a matter that serves the Israeli occupation,” Bahar said.

The Palestinian arena has been more interested recently in the fate of truce talks between Hamas and Israel rather than the fate of reconciliation between Fatah and Hamas, because there seems to be serious interest by both Israel and Hamas in the possible truce agreement. Meanwhile, procrastination prevails over reconciliation.