After a cooling of ties following the outbreak of the Arab Spring, Hamas appears to be moving to restore its relations with Iran. 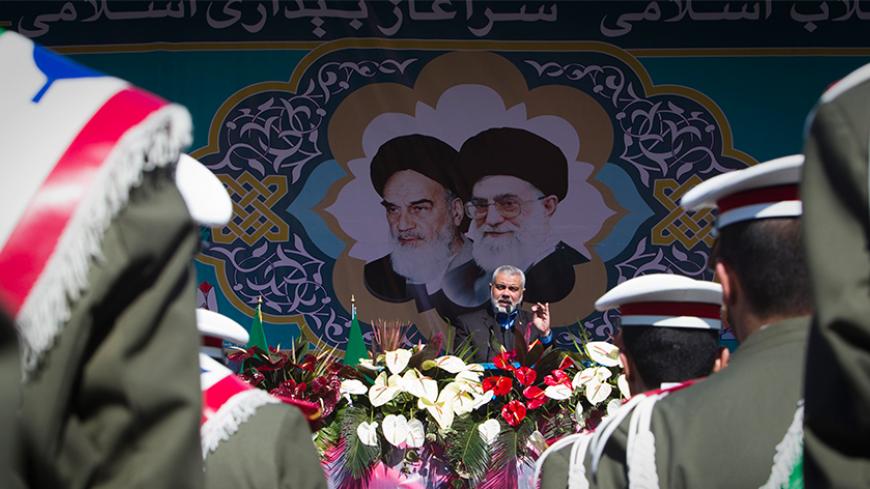 Hamas leader Ismail Haniyeh speaks during a ceremony to mark the 33rd anniversary of the Islamic Revolution in Tehran, Feb. 11, 2012. - REUTERS/Raheb Homavandi

TEHRAN, Iran — Stuck between a biological mother and an adoptive father, the Palestinian Hamas movement has been straining to keep the balance without intimidating any of the two. The Muslim Brotherhood, which Hamas belongs to ideologically, wants the group to keep its distance from Tehran. Meanwhile, Iran, which has provided financing for years, is pushing for warmer relations so that Hamas can once again be counted on to be part of the wider “Resistance Axis,” which also includes the Syrian and Iraqi governments as well as Lebanon’s Hezbollah movement.

On Feb. 9, a senior delegation from Hamas arrived in Tehran to take part in the 37th anniversary of the Islamic Revolution in Iran. Politburo members Mohammed Nasr and Osama Hamdan led the Hamas delegation, and both participated in the ceremonies — but that wasn’t all. Nasr and Hamdan seized the opportunity to meet several top Iranian officials including parliament Speaker Ali Larijani and Secretary of the Supreme National Security Council Rear Adm. Ali Shamkhani.

“Hamas officials came along with a delegation representing [other] Palestinian factions, but they stayed longer upon agreement with the Iranian side in order to pave the way for better relations,” an Iranian official told Al-Monitor on condition of anonymity. He added, “For years, there were attempts to find common ground; there are several elements that caused this coldness in relations with the political wing [of Hamas], yet it’s important to say that this never affected relations with [armed wing] Izz ad-Din al-Qassam Brigades. Now is the best time to try to build trust once again and go to further levels of cooperation with the [Hamas] movement as a whole.”

Al-Monitor learned that the Hamas delegation met with Maj. Gen. Qasem Suleimani, commander of the Quds Force — the external operations wing of the Islamic Revolutionary Guards Corps — and other officials who oversee the Palestinian file within the Islamic Republic. “Meetings were up to expectations,” said a Hamas official who asked not to be identified. He elaborated, “The world has changed a lot since [the beginning of the Arab Spring in] 2011 and till now. Iran isn’t the same as before, and we aren’t [the same either]. Yet, we both still have the same interest in having a strong resistance in Palestine to face the Israeli aggression. They know, and we believe, that there’s no benefit to restoring the old relationship [we had]; we need to build the foundations for a new relationship based on new needs.”

When the invitation was sent to Hamas to take part in ceremonies marking the anniversary of Iran’s Islamic Revolution, Hamas Politburo deputy chief Moussa Abu Marzouk was on the guest list. However, a phone conversation leaked by Saudi daily Asharq Al-Awsat that showed Marzouk accusing Iran of lying about providing Hamas with financial aid led to changes in plans, with Hamdan ultimately replacing Marzouk. “This meant nothing with respect to the plans to receive the delegation,” the Iranian official said. “Some personal views, the context in which they were expressed we do not know, won’t affect a long-term cooperation with Hamas.”

The Hamas official whom Al-Monitor met preferred not to comment on the Marzouk leak, saying, “Hamas’ official stance toward Iran is clear. Iran supported the resistance for a long time, and they are ready to continue this support now. There are new plans that are already on the right track.” He added, “In the past years, there were several mistakes and there were misunderstandings, but Iran knows — as does Hamas — that the resistance is in danger, and we know that the only country capable and ready to support the resistance is Iran. This is not an assumption; this is based on years of experience.”

The Hamas leadership has been based in Qatar for the past four years, after quitting the Syrian capital Damascus amid the outbreak of the Syrian Revolution in 2011. After this decision, Hamas’ relations with Syria gradually deteriorated. Iran and Hezbollah — both close allies of the Syrian government — saw the Palestinian movement’s position as hostile, and relations started taking a negative turn.

“The region is on fire, and the explosion has yet to come,” said the Hamas official. “Maps are being redrawn; all entities are variable now, nothing is constant. The only two constants if the situation continues this way might be Daesh [Islamic State] and Israel. We have to fight in order to avoid such an end. Israel should always feel danger; if Israel doesn’t feel that it’s under threat, we are all going to pay the price.”

According to the Hamas official, the Palestinian movement believes that the Syrian conflict is only going to add to the sectarian strife in the region. He told Al-Monitor, “The sectarian war is only benefiting Israel. There should be a political solution. Turkey and Iran are the only two powers capable of tailoring such a deal, and Palestine is the only unifying element. Palestine can rid the region from the sectarian war.” He added, “The resistance succeeded in making a big achievement. The whole Arab world will stand behind the resistance if it was unified; this is an opportunity to end the sectarian war. When we feel pain, Israel is comfortable; when Israel feels pain, we feel better. This is the equation.”

When asked about other Hamas members’ position on rapprochement with Iran, the Hamas official insisted, “We are here officially representing the movement, have a clear mandate from the higher leadership, and we extended our stay upon consultations with them. Yes, there might be people inside Hamas who might have objections to having good relations with Iran, yet our movement is strong enough to enforce any decision it takes.”