Why Iran wants Palestine back on regional agenda 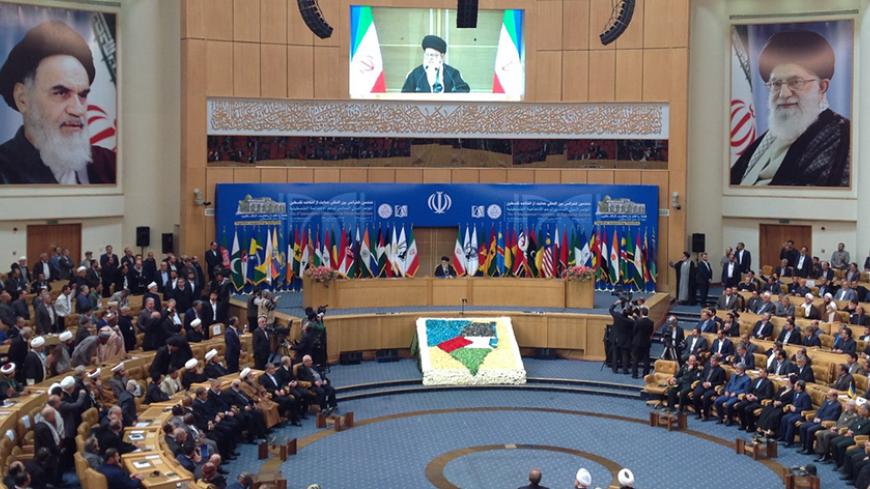 Fatima Navab Safavi is the daughter of Mojtaba Navab Safavi (1924-1955), an Iranian cleric and one of the first to mobilize Iranian masses against Israel back in the early 1950s. Donning the traditional black chador, Safavi told Al-Monitor in an interview, "Years before the [1979] Islamic Revolution, my father was able to get thousands of young men ready at that time to go and fight to liberate Palestine. … Iran's relation to the Palestinian tragedy goes back to that time. My father was one of the first to make people in Iran aware about Palestine." She was among hundreds of Iranian, Arab and other international participants taking part in a conference held in Tehran on Feb. 21-22 in support of the Palestinian intifada and the city of Jerusalem.

With regional wars intensifying from Yemen to Syria, and with US President Donald Trump having officially put Iran "on notice," the Islamic Republic has chosen to respond in a different manner. Iran has highlighted its decision a year ago to boost its support for Palestinian factions fighting Israel and to say openly that it is putting this issue at the top of its agenda. Tehran's approach indicates how things in the region are changing following the election of Trump and amid reports of a possible Saudi-Israeli alliance backed by the United States aimed at preventing Iran from expanding its regional influence.

But it's worth mentioning that if it wasn't for the yearlong renewed dialogue between the Palestinian faction Hamas and Tehran, alongside other mainstream Palestinian groups, little could have happened. Indeed, Palestinian groups complain they are left without any Arab or Islamic support to confront Israel, and that their cause is day by day becoming more forgotten and ignored.

"The relation with Tehran started going in the right track," Sami Abu Zuhri, a Hamas official visiting Tehran, told Al-Monitor. He explained that his movement is keen to have good relations with all parties in the Arab world even though the official Arab stance toward the Palestinian cause is rather weak. He added, "It's in our interest to keep knocking on doors and putting Arab and Muslim leaders before their religious and historical responsibilities toward Palestine."

Abu Zuhri was among several Hamas officials in Tehran for the conference. The delegation also included political bureau members Mohammad Nasr, Osama Hamdan and Ali Baraka. Besides Hamas, representatives of the Islamic Jihad, Fatah and the Popular Front for the Liberation of Palestine were present at the conference. Lebanon's Hezbollah movement also attended the event.

Al-Monitor has learned that these delegations met with Maj. Gen. Qasem Soleimani, the commander of the Islamic Revolutionary Guard Corps' external operations wing, the Quds Force, just a few hours after attending Supreme Leader Ayatollah Ali Khamenei's speech at the conference's opening ceremony on Feb. 21. "One of the achievements of this valuable conference is the announcement of the first priority of the world of Islam and freedom fighters all over the world, which is the issue of Palestine," said Khamenei, who hinted that his country's support to the Palestinian factions will follow one criteria. "We are with every group that is steadfast on this path, and every group that abandons this path has drifted away from us."

An Iranian official who spoke to Al-Monitor on condition of anonymity revealed that efforts to support the Palestinian factions have doubled in recent months. "Unfortunately, to many Muslims, Palestine became a marginal issue. People are busy with their local problems, media are shifting their attention from the main cause." The official added, "It's not a secret that Iran is supporting the resistance in Palestine. We never stopped, but once again, as Israel and America are both working hard to suppress the Palestinians, we are going to do our best to keep this fight alive."

Regarding the Iranian response to what is perceived as a Saudi-Israeli rapprochement, a Gulf Arab diplomatic source told Al-Monitor, "Iran is exploiting the Palestinians and using them to implement its sectarian agenda in the Middle East." He added, "The Palestinians here are just a Trojan horse for the Iranians to cover up the acts of terrorism they are committing in several Arab countries. They only care to reach the Mediterranean and empower their proxies."

Saudi Arabia, Iran's main rival in the region, has stepped up its criticism in recent months, accusing Tehran of being the "single main sponsor of terrorism in the world." For years, Iranian-Saudi tensions have overshadowed the region, and attempts to diffuse it — including the most recent attempt at mediation involving Kuwait — have not appeared to achieve any positive outcome.

Tehran University professor Mohammad Marandi told Al-Monitor, "Iran's support of the Palestinian cause started decades before the [1979 Islamic] Revolution. Iran over the past four decades always paid for its support for Palestine. It has never benefited from it, it has always paid a heavy price. Many sanctions wouldn't have been there if it weren't for Iran's support for the Palestinian issue and Iran's opposition to the notion of Israel's legitimacy."

Iran was keen to have all its high-profile officials at the conference. President Hassan Rouhani delivered the concluding speech in the presence of Foreign Minister Mohammad Javad Zarif. Parliament Speaker Ali Larijani chaired the conference, while Armed Forces Chief of Staff Mohammad Bagheri and Revolutionary Guard commander Mohammad Ali Jafari were both in attendance. The apparent aim of this show of unity? To send a clear message not only to Washington and Tel Aviv, but also to regional capitals, that Iran is ready for any confrontation.