The normalization of ties between Iran and the Palestinian Hamas movement appears to be accelerating amid the crisis among Gulf states. 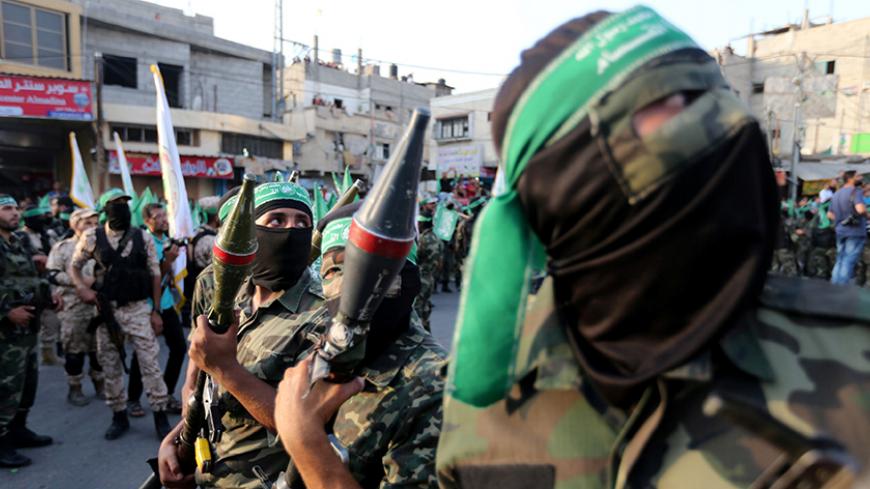 TEHRAN, Iran — When Hamas’ politcal bureau member Izzat al-Rishq, heading a delegation from the movement, met with Iran’s supreme leader’s foreign policy adviser, Ali Akbar Velayati, it was the first time the two men had met since 1991, when the former was still a junior member of Hamas and the latter was Iran’s foreign minister. The 1991 meeting gave Iran a strong ally inside the Palestinian territories and provided Hamas with steady and generous support to take its fight with Israel to another level. This was while the region was in the midst of a peace process that saw both the Palestinians and Jordanians signing separate peace accords with Israel.

Memories of the first meeting came to mind not only for the personal aspect but also because Hamas’ recent visit to Iran — as in 1991 — is aimed at putting relations back on track. For this specific reason, members of the delegation were chosen carefully so that they represent all lines of thought in the movement.

The meeting with Velayati wasn’t the only meeting the delegation held in Tehran; they also met with Foreign Minister Mohammad Javad Zarif and parliamentary speaker Ali Larijani, and they took part in President Hassan Rouhani’s inauguration ceremony on Aug. 5, side by side with dozens of delegations from around the world.

Among the delegation were Zaher al-Jabarin and Saleh al-Arouri, both senior commanders whom Israel regards as serious threats to its national security. On June 9, Israeli Defense Minister Avigdor Liberman asked the US ambassador to the United Nations on her visit to Israel to exert pressure so that Arouri gets deported from Lebanon, where he resided after being asked along with Jabarin to leave Qatar. Both commanders are accused by Israel of being responsible for attacks inside the West Bank. For that reason, pressure was exerted previously on Turkey — Arouri’s station after leaving Syria — to deport him. Jabari's and Arouri’s appearances in Tehran shortly after the latter was pictured in Beirut with an Iranian official might be a clear message from both Hamas and Iran to Israel that its two archenemies are starting a new venture.

Al-Monitor has learned that the Hamas delegation additionally met with the commander of Iran’s Quds Force, Maj. Gen. Qasem Soleimani, yet there is no further information on what transpired in the meeting. An Iranian political source revealed to Al-Monitor that as of now all the implications of the previous five years are gone, and Iran’s support for Hamas is now even beyond what it used to be prior to the Syrian crisis.

The war in Syria had dire repercussions for the relations between the two sides. According to another Hamas official, the movement tried at the beginning of the crisis to bridge the rifts between the Syrian government and the opposition but in vain, telling Al-Monitor on condition of anonymity, “In 2014, we had another attempt to bring together Turkey and Iran to solve the crisis in Syria. For some reasons, that time it didn’t work either.” The Hamas official emphasized that this visit to Tehran was not to open a new chapter, saying, “Despite differences, Hamas never stopped visiting Tehran. There were always visits on different levels; yet, this time, alongside the invitation to attend the president’s inauguration, it was an opportunity to meet high-ranking officials and discuss the regional standoff.”

The official hinted, “There are attempts to make us accept Israel in the region as one of us, an ordinary state, via an Arab-Israeli peace conference, yet the response of the people of Jerusalem and Al-Aqsa Mosque gave a clear message that this is not possible. The Israelis and the Americans aren’t going to give up, and they are going to add pressure. Therefore, the situation in the region prompts us to have a unified Palestinian stance in coordination with regional players who have the Palestinian cause high on their priority list to confront this project.”

According to the doctrine adopted by the Islamic Republic of Iran since the 1979 Islamic Revolution, Israel is an enemy and the state of Israel is an occupation force on the land of Palestine. Therefore, Iran has supported various Palestinian groups, along with Hezbollah in Lebanon, in the fight against Israel.

“This visit isn’t a new chapter,” a second Hamas official told Al-Monitor on condition of anonymity. “The new chapter was opened a while ago; we both agree that we stand on solid ground. Our [relationship] is more than 25 years old; therefore, we are not building from scratch. We both know what we need, and for that reason, nobody in Iran or in Hamas is openly discussing the details. We are more interested in results, and recently things had been clear, and developments on the ground prove that our choice is right.”

Given the sectarian strife in the region, it wasn’t an easy task to see Hamas getting closer to Iran against the will of its popular base. Iran too was defying a common belief among its allies and elites that trusting Hamas isn’t a good choice. Maybe Iran as a nation had a wider margin than that of Hamas, thanks to the Gulf crisis and stances by officials from Saudi Arabia and the United Arab Emirates labeling the Palestinian group a terrorist organization.

Qatar’s political and financial support to Hamas was an issue the Gulf states raised to increase pressure on Qatar. The tiny Gulf state had to ask some Doha-based Hamas commanders to leave.

This dilemma made it easier for the group’s leaders to go the extra mile and completely head toward normalizing ties with Iran. The election of a new Hamas leadership has also had an impact on the decision to resume the strategic alliance with Tehran. This normalization was reflected in the participation of Hamas in the inauguration ceremony and will be celebrated on higher levels by the two sides later, when Hamas’ new political bureau chief, Ismail Haniyeh, makes his way out of the Gaza Strip to Egypt and then starts his first regional tour from the Islamic Republic of Iran.