Is Barzani backing away from independence referendum? 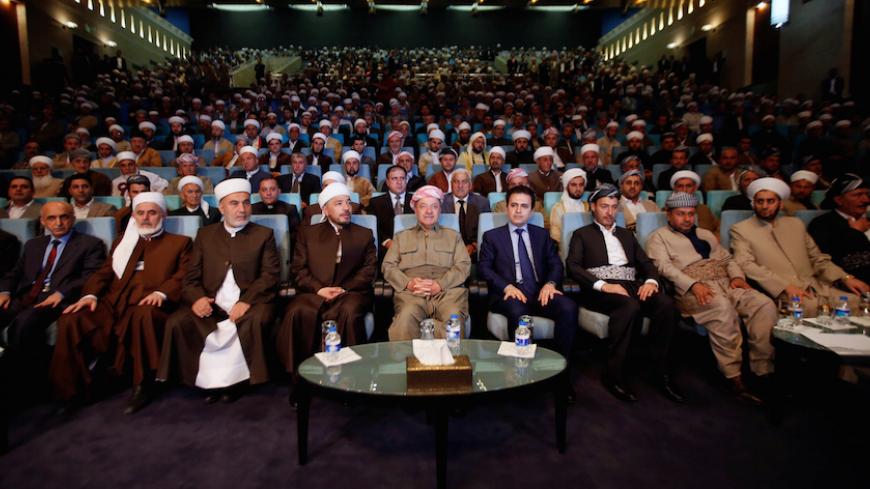 Iraq's Kurdistan Region President Massoud Barzani (C) sits during his meetings with clerics and elders from the cities of the Kurdistan Region in Erbil, Iraq, Aug. 9, 2017. - REUTERS/Azad Lashkari

US makes clear its support for unified Iraq

No surprise for readers of Al-Monitor, including readers of this column last week, that Iraqi Kurdistan's President Massoud Barzani may consider stepping back from holding a referendum on Iraqi Kurdish independence previously scheduled for Sept. 25.

In a telephone call Aug. 11, US Secretary of State Rex Tillerson commended Barzani on negotiations between Erbil and Baghdad on “outstanding issues” and asked him to postpone the referendum. Barzani responded that by doing so he “would expect guarantees and alternatives for their [the Iraqi Kurds] future.”

Barzani has not yet made a decision to call off the referendum as this column goes to press. Hoshyar Zebari, a close adviser to Barzani, said, “The date is standing, Sept. 25, no change," after the call with Tillerson, according to Reuters.

Fazel Hawramy writes that while international opposition to the referendum has been overwhelming, “the deadliest blow might, however, come from within. Ordinary Kurds, in particular those in Sulaimaniyah, are angry about the government's mismanagement of the economy, and many appear ready to express their dissatisfaction in their approach to the referendum.”

Hawramy also reports that pressure from Iran to postpone the referendum intensified in recent weeks, including a “secret” visit by an Islamic Revolutionary Guard Corps Quds Force delegation to Erbil on July 30, soon after contentious meetings between Patriotic Union of Kurdistan leaders and Iranian officials in Tehran earlier in the month.

Iraqi cleric Muqtada al-Sadr raised the topics of the Iraqi Kurdish referendum and support for a “unified Iraq” with Saudi Crown Prince Mohammed bin Salman in Riyadh on July 30. That visit, as reported by Hamdi Malik, was “part of Sadr's efforts to keep a balance in his relations with neighboring countries in a bid to ease sectarian tensions in Iraq and strengthen his position as an Iraqi leader.” Ibrahim Malazada reported last week on Sadr’s and other Iraqi clerics’ opposition to the referendum.

While originally envisaged as a means to maximize leverage in negotiations with Baghdad, the referendum instead has revealed the limits of support for Iraqi Kurdish independence among the region’s allies. In a recent report for the Carnegie Endowment for International Peace, Al-Monitor columnist Denise Natali summarizes the dilemma for the Kurdistan Regional Government (KRG): “Despite an intense lobbying campaign in Washington, DC, and Europe, the KRG has failed to gain key regional and international actors’ official support for the referendum or Kurdish secession. Governments and institutions may affirm the Kurds’ right to self-determination, like all peoples of the world, and recognize the significant contributions that the Kurdish peshmerga have made to the fight against the Islamic State. Yet they remain committed to Iraq’s territorial integrity and state sovereignty. Even the US Congress — where Iraqi Kurds enjoy important influence — has conditioned future military support to the Kurdish peshmerga on the KRG remaining part of the Iraqi state.”

Barzani has provided inspired leadership during Iraqi Kurdistan’s most challenging periods. He has also been a reliable and effective ally in US efforts to combat the Islamic State and battle terrorism in the region. Washington has every interest in providing “guarantees and alternatives” so Barzani does not lose face with his people and the region if he agrees to the US request to postpone the referendum. But the United States has shown that it will take no steps that compromise a unified Iraq — a hard and fast position Washington shares with Brussels, Moscow and Ankara, as well as with Tehran and Damascus.

Iran-Hamas relations "back on track"

Ali Hashem reports on the visit of a senior Hamas delegation to Tehran, including their participation in Iranian President Hassan Rouhani’s inauguration ceremony for his second term, as a sign that Iran-Hamas ties are on a path to normalization.

Al-Monitor has provided unmatched coverage of the warming trend in Hamas-Iran ties, which have accelerated as a result of the Saudi-led dispute with Qatar. Adnan Abu Amer wrote last month, “Hamas realizes that the margin of political maneuvering has been narrowed by the polarization of the two rival axes: Qatar and its allies against Saudi Arabia and its partners. However, in the absence of other options, the movement seems compelled to resort to Iran and its allies in the region, namely Hezbollah, to survive. Even if it is faced with a new wave of criticism, Hamas would still be turning toward Hezbollah.”

Hashem explains, “Given the sectarian strife in the region, it wasn’t an easy task to see Hamas getting closer to Iran against the will of its popular base. Iran too was defying a common belief among its allies and elites that trusting Hamas isn’t a good choice. Maybe Iran as a nation had a wider margin than that of Hamas, thanks to the Gulf crisis and stances by officials from Saudi Arabia and the United Arab Emirates labeling the Palestinian group a terrorist organization. … This dilemma made it easier for the group’s leaders to go the extra mile and completely head toward normalizing ties with Iran. The election of a new Hamas leadership has also had an impact on the decision to resume the strategic alliance with Tehran. This normalization was reflected in the participation of Hamas in the inauguration ceremony and will be celebrated on higher levels by the two sides later, when Hamas’ new political bureau chief, Ismail Haniyeh, makes his way out of the Gaza Strip to Egypt and then starts his first regional tour from the Islamic Republic of Iran.”

Abu Amer adds this week that Hamas is also hopeful of improved ties with Russia, which has refrained from labeling it a terrorist organization. “At the height of Hamas' political isolation, following the outbreak of the Gulf crisis, Washington described the movement as a terrorist organization and the EU kept it on the list of terrorist organizations,” Abu Amer writes. “However, today, Hamas considers its rapprochement with Russia a serious breakthrough at the international level, and might deliberately increase contact with Moscow to make sure it has its support in any political or military escalation with Israel.”