Kurdish independence in Iraq will take more than a referendum

The Kurdistan Regional Government has its work cut out for it to achieve an independent Kurdistan, as its plans would require the cooperation of some unlikely players. 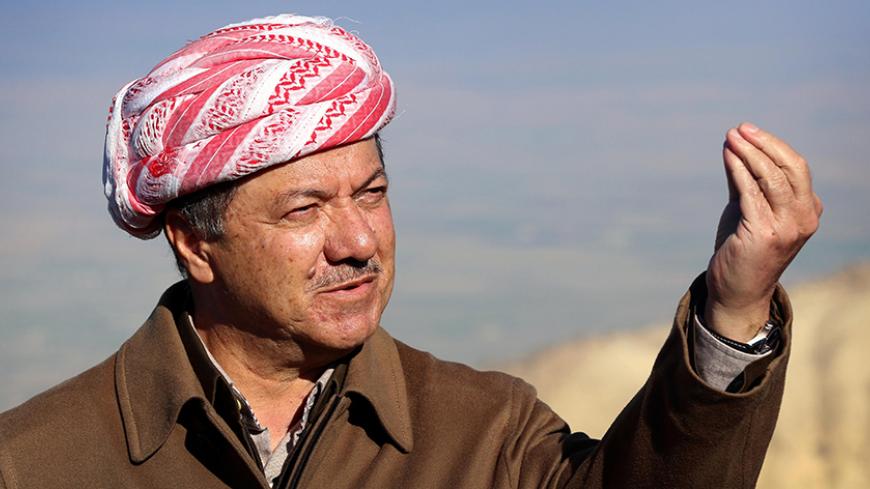 The recently revived push for an independent Kurdistan has many obstacles to overcome: its threat to the Middle East's always-fragile stability, Turkey's long-standing opposition, US uncertainty and just overall bad timing.

Massoud Barzani, president of the Kurdistan Regional Government (KRG), announced that a referendum for an independent Kurdistan will be held Sept. 25. An independent Kurdish state is a long-cherished goal for most Kurds, who are spread over mainly four countries: Turkey, Iran, Iraq and Syria — making it the largest stateless nation in the world.

Another goal accompanying the dream of an independent state is acquiring the disputed territories ranging from Sinjar to the west of Mosul up to Khanaqin on the Iran border, including the southeastern oil-rich province of Kirkuk.

Kurdish peshmerga forces took part in the operation to liberate Mosul, which was coordinated by the United States with the Shiite-dominated Iraqi forces. The price tag for the Kurd’s participation in liberating Mosul was supposedly Baghdad’s and Washington’s acquiescence for an independent Kurdish state under Barzani.

Yet such an achievement doesn't appear imminent.

In December, a few days before Christmas, Masrour Barzani, the elder son of the president and chancellor of the Kurdistan Region Security Council, initiated a two-day symposium in Dahuk at the American University of Kurdistan. Attendees included international luminaries Zalmay Khalilzad, a former US ambassador to Baghdad; Bernard Kouchner, a former French foreign minister; and Peter Galbraith, a former US diplomat. Almost every high-level Kurdish official, including KRG Prime Minister Nechirvan Barzani, a nephew of Massoud Barzani, was there. Their consensus was that the Kurds have the right of self-determination, which could lead to independence.

However, the consensus held slight nuances. For instance, Khalilzad emphasized the importance of prudence. Hoshyar Zebari, the president's uncle and the longest-serving Kurdish official in Baghdad, reminded the audience that if it comes to proclaiming Kurdish independence, Baghdad will not be forthcoming. As a former foreign minister of Iraq, Zebari is more familiar with the Arab political elite in Baghdad (Shiite and Sunni alike) than any other Kurd.

I was among the speakers at the symposium. Recognizing the legitimacy of Kurdish aspirations for an independent state, I stressed that as long as independence is achieved peacefully with the endorsement of Baghdad, the two neighboring big powers — Turkey and Iran — are likely to follow suit. Moreover, since the KRG is Turkey’s only friend in the region — which is paradoxical because Turkey has always been uncompromisingly hostile to the concept of Kurdish independence — Erdogan would probably concede to Kurdish independence in Iraq.

The issue is also a geopolitical one. A Sunni Kurdish buffer to Shiite-dominated Iraq might serve Turkish interests. Massoud Barzani’s animosity toward the Kurdistan Workers Party (PKK) — Turkey’s Kurdish adversary in Turkey and Syria — could serve as another element in Ankara’s acceptance of an independent Kurdish state.

Notwithstanding the rationality of these arguments, the Turkish Foreign Ministry's initial reaction to Barzani’s statement was to issue a moderately worded but critical statement June 9 about the Kurdish independence referendum.

“We have been conveying for some time Turkey’s concerns about the independence referendum — which the KRG has been planning to organize — to the government of Iraq and the KRG, as well to the leading members of the international community. In this regard, we have been stressing that at a time when critical developments are unfolding in the region, such a move would benefit neither the KRG nor Iraq and that it would have negative consequences which will cause further instability,” the statement said.

Holding the referendum "runs counter to our advice and warnings" and would be a "grave mistake," the ministry said.

Also, the feasibility, viability and survival of an independent Kurdish state in Iraq would require Western endorsement, especially from the United States.

During a joint press conference April 20 with Barzani, German Foreign Minister Sigmar Gabriel said his country does not support the Kurdish referendum.

US State Department spokeswoman Heather Nauert's statement during a June 8 press briefing reflects the ambiguity of the US position on Iraqi Kurdish independence:

“The United States — and we have talked about this one before — we support a unified, stable, democratic, and a federal Iraq. We understand and appreciate the legitimate aspirations of the people of Iraqi Kurdistan. We have expressed our concerns to the authorities in the Kurdistan region that holding a referendum, even a nonbinding resolution at this time, will distract from urgent priorities — and that would be the defeat of [the Islamic State (IS)], the stabilization, the return of displaced people, managing of the region’s economic crisis, and resolving the region’s internal political disputes. We would also encourage the regional authorities to engage with the government of Iraq on a full range of important issues [on] the future of relations between Baghdad and Erbil."

Kurds might interpret that ambiguity to mean Washington doesn't oppose an independent Kurdish state in principle. Yet the statement by no means indicates an American commitment, which is essential for the Kurds to move forward.

Also, the timing of Barzani’s referendum was touchy. It was announced June 7, just as the Gulf crisis with Qatar was unfolding. Turkish President Recep Tayyip Erdogan and Barzani have a type of overlord-vassal relationship that could prove problematic now, given the seemingly irreconcilable dispute between Qatar and a Saudi-led coalition that accuses it of supporting terrorism. Erdogan firmly took Qatar’s side.

But Barzani made a big leap in placing himself, and the KRG, firmly in the “Sunni camp of the Middle East” with his rapprochement with Saudi Arabia. He was received in Riyadh in December 2015 at the highest level by King Salman bin Abdul-Aziz Al Saud, who was accompanied by Crown Prince Mohammed bin Nayef, Deputy Crown Prince Mohammed bin Salman and the most important members of the royal family. Such a reception was symbolic in regard to unwritten Sunni guarantees for Barzani against Iran. At the time, the Sunni camp of the Middle East looked — though loosely — united. Now, due to the Qatar-Saudi tension, it is undone.

Geopolitically, Barzani cannot move away from Turkey. But as Ankara is already unsupportive of a Kurdish independent state, it's politically untenable to stand with Turkey against Saudi Arabia, Egypt and the United Arab Emirates. It is also irrational to move closer to Tehran and Baghdad while pursuing the goal of divorcing the latter.

Under the current circumstances, the referendum for an independent Kurdish state — which would eventually lead to, if not a de jure, then a de facto breakup of Iraq — would be adding a new volatile element to the already-chaotic Middle East and Gulf.

Unless Turkey makes an unlikely U-turn, it will be almost impossible for an independent Kurdish state to survive, even if the referendum passes Sept. 25.