Is the United States missing an opportunity with Iran in the war against the Islamic State? Turkey, Hamas deal with fallout from Qatar dispute; Al-Monitor had the jump on “secret” US-Russia talks on Syria. 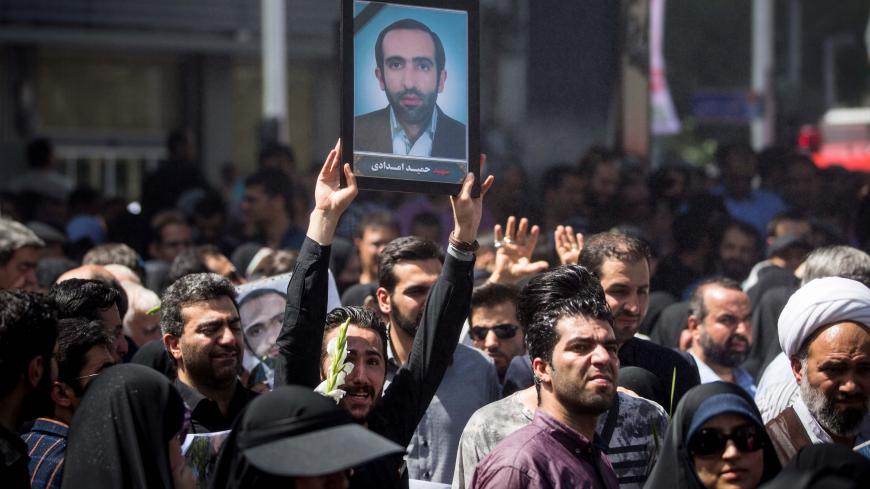 People attend the funeral of victims killed in the June 7 attack at the Iranian parliament and Ayatollah Ruhollah Khomeini's mausoleum, in Tehran, Iran, June 9, 2017. - TIMA via REUTERS

US should engage Iran to defeat Islamic State

Al-Monitor wrote last week, prior to the twin attacks by Islamic State (IS) terrorists in Tehran on June 7, that the first “four terrorist incidents since the Riyadh summit provide further evidence of the hollowness of the charge that Iran is at the core of the threat from those terrorist groups that most threaten the United States, its allies and so many innocents.”

The attacks in Tehran should, finally and urgently, force a rethinking of the reasoning that linked Iran, IS and al-Qaeda, not only because no such link exists, and not only because Iran is helping Syria and Iraq battle these groups, but because the costs for the United States and its allies and interests have been high, and are likely to get higher. In the warped minds of IS operatives, who are on a murder spree since US President Donald Trump’s visit to Riyadh, summit and post-summit messaging may have been interpreted as a kind of signal for a new phase in the sectarian war. Hitting Iran, in this score, can buy you a pass.

IS and al-Qaeda have of course killed and maimed across religions and sects, and will continue to do so, which is why we make the case for a shared struggle based on a common threat and humanity, not one that tilts to one side in the reactionary sectarian identity politics that permeate the region’s conflicts, and in which the United States should have no part.

US President Donald Trump’s statement of condolence, which included the line “states that sponsor terrorism risk falling victim to the evil they promote,” only served to deepen the regional fault lines. More appropriate would have been phrasing that emphasized the shared interest in the common struggle against terrorism. The United Kingdom, Iraq and Egypt, all recent victims of terrorism, are of course not “states that sponsor terrorism.”

Ali Hashem writes that for Iran, the terrorist attacks "are a clear breach of the rules of the game that has put the whole region at the brink of a very dark abyss. The Iranian security source explained that such attacks are read well by Tehran as part of the proxy war some states are waging with the aim to respond to their failures in Iraq, Syria and Yemen during the past five years, ‘Name calling isn’t important; the fact is that Iran knows well that such attacks are desperate attempts to pressure Iran and the people of Iran. But for us, it is the other way round; this proves the righteousness of our choices from the beginning. If Iran hadn’t fought off these monsters [in the region], they would have come here a long time ago.”

The crackdown and investigation into the first IS attacks inside Iran continue. Fazel Hawramy writes, “It is difficult to gauge the number of Iranians who have joined IS. But given that four of the attackers in Tehran came from a single Sunni Kurdish town, it appears that the number could be high. Kurdish media is full of stories of groups of Iranian Kurds joining IS and al-Qaeda-linked Jabhat Fatah al-Sham, previously known as Jabhat al-Nusra. Indeed, IS-affiliated Kurdish channels on the popular smartphone messaging app Telegram have published dozens of videos of Iranian Kurds after their arrival in Mosul and Raqqa.”

Amberin Zaman writes that Turkish President Recep Tayyip "Erdogan had invested high hopes in Trump, but his meeting with the American president last month yielded little. Overriding Turkish howls of protest, the United States is arming the Syrian Kurds and is unlikely to extradite Fethullah Gulen, the Turkish preacher whose disciples in the armed forces are accused of taking part in the failed July coup in large numbers. Nor will it hand over Reza Zarrab, the Iranian-Turkish gold trader with close ties to key members of Erdogan’s AKP [Justice and Development Party] who is accused of busting US trade sanctions on Iran. On June 6, the US House of Representative unanimously approved a resolution calling for members of Erdogan’s security detail who were involved in the violent suppression of pro-Kurdish protesters outside the Turkish ambassador’s residence last month to be brought to justice. … Erdogan and his inner circle apparently believe that there is a broader US-orchestrated conspiracy to squeeze him together with Qatar and Iran. The conspiratorial mindset was palpable in Erdogan’s comments at an iftar gathering of foreign ambassadors in Ankara: ‘There is a game being staged behind the Qatar crisis, but we have failed to decipher it thus far.’"

Zaman adds that all of this complements a warming trend in ties between Moscow and Ankara. “Tellingly,” Zaman writes, “Erdogan also mentioned Andrei Karlov, the Russian ambassador to Ankara who was assassinated by a rogue Turkish police officer in December. ‘He was a regular at our table. We remember a good man and a real friend of our country.’ … Turkey has made a big show of drawing closer to Russia in recent months, partly in reaction to continued US support for the Syrian Kurdish group known as the People’s Protection Units, which is closely tied to a militia that is waging a bloody campaign for Kurdish self-rule in Turkey.”

Semih Idiz explains, “The alliance against Qatar is also an alliance against the Muslim Brotherhood, seen by Riyadh and Cairo as a terrorist organization. Erdogan, his ruling Justice and Development Party (AKP) and its Islamist support base, however, consider the Brotherhood to be a kindred organization, and it remains a contentious issue not just with Egypt and Saudi Arabia, but also with the UAE [United Arab Emirates]. Ties between Ankara and the UAE, which has accused Turkey in the past of supporting radical Islamic groups, also remain tense, even though the sides are trying to overcome their differences. Diplomatic sources indicate that Ankara has also been lobbying Washington with a degree of success to prevent it from declaring the Muslim Brotherhood a terrorist organization.”

Adnan Abu Amer writes that pressure on Qatar to crack down on Hamas could force Doha “to give in and make things easier on itself by asking Hamas to reduce its total presence there without ending it altogether, although that might still restrict Hamas officials' movements between countries. However, the newly elected Hamas leadership, represented at home and abroad by Yahya Sinwar and Ismail Haniyeh, resides in Gaza, which might dampen the consequences of Qatar's request.”

It could also provide another opening for Iran. As we reported last week, Hamas has already been feeling the pinch as a result of the Riyadh summit, as it was lumped with IS, al-Qaeda and Hezbollah. A nascent tilt toward Iran might be the outcome of further pressure.

Al-Monitor on the "secret" talks

The Wall Street Journal reported June 9 that US and Russian officials had been holding “secret” talks in Jordan about the Russian proposal for de-escalation zones in Syria. This was of course hardly news to readers of Al-Monitor, as Laura Rozen had broken the story about the secret talks eight days earlier, on June 1.