Riyadh summit may have fueled sectarian animosities; Hamas resets its ties with Iran and Russia. 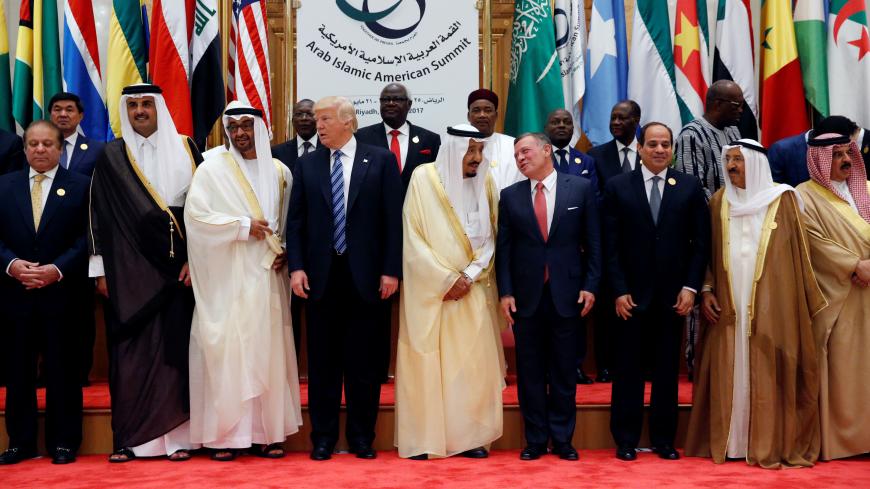 What’s left of the Saudi bloc?

Bruce Riedel explains that the “Saudi-orchestrated bloc of Sunni Muslim states celebrated at US President Donald Trump's visit to Riyadh is splintering less than two weeks after the summit. There is growing unease with the summit's intense animosity toward Iran and increasing concerns that the Saudis are inflaming the sectarian divide between Sunnis and Shiites. Trump's domestic troubles are also raising doubts over whether Washington is reliable.”

There is well established bad blood in the region because of Iran’s actions throughout the Middle East. But linking Iran, even implicitly, to the Islamic State (IS) and al-Qaeda, in addition to being mistaken, may ultimately serve only to fuel “the fires of sectarian conflict and terror,” as Trump accused Iran of doing.

Fareed Zakaria wrote in The Washington Post that “Trump has adopted the Saudi line on terrorism, which deflects any blame from the kingdom and redirects it toward Iran.” A more nuanced and realistic approach to the region would avoid adopting any “line” on matters of such urgency. For example, Iran is supporting both the Iraqi and Syrian governments against IS and other terrorist organizations. This is not to say Iran’s intentions in both countries are pure; it is simply to state the flaws in the broad-brush approach to Iran, which also constrains opportunities for cooperation and conflict resolution.

Zakaria cites the Global Terrorism Database at King’s College as revealing that “more than 94% of deaths caused by Islamic terrorism since 2001 were perpetrated by the Islamic State, al-Qaeda and other Sunni jihadists. Iran is fighting those groups, not fueling them. Almost every terrorist attack in the West has had some connection to Saudi Arabia. Virtually none has been linked to Iran.”

Four terrorist incidents since the Riyadh summit provide further evidence of the hollowness of the charge that Iran is at the core of the threat from those terrorist groups that most threaten the United States, its allies, and so many innocents. IS took responsibility for three terrorist bombings since the summit: for the 23 killed, including many young people, at a concert in Manchester on May 22; for the deaths of 22 Iraqis, including women and children, in a predominantly Shia district of Baghdad, on May 29; and for the murder of at least 7 on London Bridge on June 3. This is in addition to the killing of 29 Coptic Christians in Egypt on May 26 by an al-Qaeda-linked group based in Libya.

Sheikh Tamim bin Hamid Al Thani, the emir of Qatar, quickly broke ranks over the Saudi hard line on Iran after the summit. Riedel writes, “The Qatari quarrel is highly visible and has gone on before. It's a repeat performance of the 'uppity' Qataris' challenging their bigger brother. More quietly, Oman has also distanced itself from the Saudi bloc. Sultan Qaboos did not attend the Riyadh summit and his representative did not get a short bilateral meeting with Trump, as did all the other GCC [Gulf Cooperation Council] representatives. Oman has stayed out of the Saudi war in Yemen and has kept open its ties to Iran. … Both Qatar and Oman have economic ties with Iran that constrain their approach to Tehran. But the emir and sultan are also very troubled by the growing sectarian tensions throughout the Islamic world.”

And then there is Yemen. At the Riyadh summit, Yemen was referenced mostly as a theater of confrontation and conflict with Iranian proxies. The political process barely got lip service, and the Yemeni people continue to pay the price. On May 30, the UN special envoy for Yemen, Ismael Ould Cheikh Ahmed, said that an agreement to end the conflict is “not close,” as the besieged Yemeni population is battling an “unprecedented” cholera outbreak that may reach 130,000, mostly children, in the next two weeks.

Riedel concludes, “Saudi largesse will ensure the Sunni alliance does not completely unravel. A core group of states share Riyadh's hatred of the Iranians or are prepared to indulge Riyadh. But many more states are eager to avoid fanning the sectarian divide. They blame both Riyadh and Tehran for stoking tensions. For all of them, their own national interests trump Islamic or Sunni unity.”

Adnan Abu Amer reports that the Iranian government is seeking to lure Hamas into its "resistance" axis, following the election of Ismail Haniyeh as head of Hamas’ political bureau last month.

“Over the past few years, Hamas may have been wary of its regional relations. It has not been entirely close to Iran, so as not to upset Saudi Arabia and the Sunni states, nor has it cut off all ties with Tehran for fear of the total loss of its financial and military support, which may have decreased but never stopped, although there are no accurate figures,” Abu Amer writes.

But the US-Saudi-Islamic summit forced a rethink by the Hamas political leadership, as Trump lumped Hamas with IS, al-Qaeda and Hezbollah. “The successive events in the region may have a negative effect on Hamas, as it may see itself in the eye of the regional storm,” Abu Amer writes. “This might make it prone to new blockade policies, which might push it over the edge into fully restoring its relationship with Iran. Hamas might as well be jumping into a time machine that will take it back to before the estrangement with Tehran in 2012, adopting political positions that will require a new classification of political axis, without any hesitation on Hamas’ part in terms of normalization with Tehran.”

Abu Amer separately notes that Hamas is also seeking improved ties with the Kremlin to counter Israeli and American actions to isolate and contain it. Abu Amer writes, “The mutual interests between Hamas and Russia may lie with the latter's desire to form regional alliances to serve its interests and to improve the Russian image vis-a-vis the Muslim world by linking itself to a large Islamic movement such as Hamas. Meanwhile, during the meetings held between 2006 and 2016, it seems Hamas wanted Russia to break the siege imposed on Gaza since 2006. In addition, this helps Hamas become more open to the world in order to ease international pressure.”

Abu Amer considers the relationship with Russia as a win for Hamas, but will likely require some adjustment in its policies toward Israel. “Developing a relationship with a superpower such as Russia bodes well for Hamas’ security situation; the movement can use this rapprochement to protect itself against any international pressure,” he writes. “However, Moscow is not a charity and Hamas will undoubtedly have to show some flexible political positions regarding the conflict with Israel in return. Although Russia has already seen this intention in Hamas’ new policy document, the movement will have to take action to prove its flexibility.”