Iran's improved relations with Turkey, Qatar and Hamas send a message to the region. 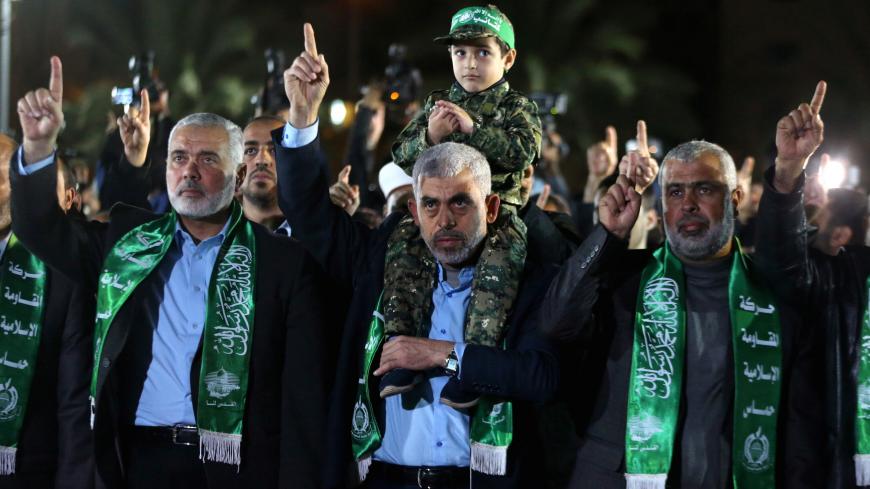 The son of senior Hamas militant Mazen Fuqaha sits on the shoulders of Hamas Gaza Chief Yahya Sinwar during a memorial service for Fuqaha, in Gaza City, March 27, 2017. - REUTERS/Mohammed Salem

Hamas appears to be throwing in its lot with Iran, a trend that has accelerated since the US-Saudi-Islamic summit in May, when US President Donald Trump lumped the Islamic Resistance Movement with the Islamic State, al-Qaeda and Hezbollah.

The shift may signal the increased influence of the hard-line Izz ad-Din al-Qassam Brigades, the militant armed wing of Hamas, as well as fallout from the Saudi-United Arab Emirates-Egypt-Bahrain dispute with Qatar and the emergence of a regional consensus, including a meeting of minds between Iran and Turkey, to deal with the Syria war.

According to Adnan Abu Amer, al-Qassam Brigades leaders suggested creating a political and security vacuum in the Gaza Strip to force Israel’s hand to either deal with Hamas or deal with the consequences of chaos on its border. Negotiations with Egypt and former Fatah leader Mohammed Dahlan, brokered by the UAE, have slowed in recent weeks. These talks have included discussions of a prisoner exchange with Israel, which also appear to have stalled, Shlomi Eldar reports.

“Hamas has chosen military and economic aid to rearm itself at the expense of Gaza residents, who believed that improved relations with Egypt offered the best hope of easing the siege in any significant way,” Eldar writes. “If there was any chance for a humanitarian solution in Gaza as a result of the warming of relations between Hamas and Egypt, the recent decision by the movement's leadership [to strengthen ties with Iran] sealed the already miserable fate of Gaza's people and ensures permanent control of the territory by the movement's military wing.”

Ahmad Abu Amer explains that Hamas’ actions are a bid to reset its ties with all key regional powers, including the Syrian government. “Hamas left Syria at the end of 2011, after the Syrian civil war broke out, out of support for the Syrian people,” Abu Amer writes, and also in solidarity with the Qatari government, which provided support to Hamas, and as not to antagonize Saudi Arabia. Both Riyadh and Doha backed armed groups seeking to overthrow Syrian President Bashar al-Assad, who in turn expelled Hamas leaders from Syria.

Abu Amer reports, “Hamas would not mind bolstering its ties with the Syrian regime, Yahya Sinwar, the head of Hamas in the Gaza Strip, told Al-Monitor when he met with reporters Aug. 28 in Gaza. He stressed that a ‘breakthrough’ had occurred in the Syrian crisis, and he said that it would offer an opportunity to improve relations between Hamas and the regime. … 'We are waiting for the right time to restore that relationship so that Hamas remains out of the power struggles in the region. We are adopting a "zero-problems" policy with all parties, so as to serve the Palestinian cause,’ Sinwar said. … Hamas is also convinced that it's in its best interest for Syria to control the Golan front in any future military confrontation with Israel.”

Given the crisis in Hamas’ relations with both Israel and the Palestinian Authority, its “zero problems” policy may be a stretch. What is not a stretch is that Hamas’ regional calculations now appear to be formulated in ever closer consultation with Iran. As we mentioned last week, Iran’s ties with both Turkey and Qatar, and now Hamas, all predominantly Sunni, should raise questions about the misleading and narrow sectarian "narrative" used by Tehran’s adversaries to explain Iran’s regional ambitions. As we wrote in our very first column, in November 2012, “In the Gaza conflict, Iran revealed that it has the wherewithal to shift the equation and provide some payback, even in those areas where its adversaries allegedly hold sway and hegemony.”

Semih Idiz explains that Ankara’s call for “regime change” in Damascus is now widely acknowledged as a disaster linked to former Foreign Minister Ahmet Davutoglu’s wrong-headed assessment in August 2012, shared by many Western officials and “experts,” that the Syrian president would fall in “months or weeks,” allowing a “Sunni” takeover in Syria. Davutoglu played to Turkish President Recep Tayyip Erdogan’s worst instincts and fantastical ambitions of a sectarian windfall from what was called the “Arab Spring.” Idiz points out the hollow moral claim of the Turkish split from Assad, as Erdogan had no problems with “brotherly” relations with his Syrian counterpart until then. Now, Idiz, writes, the Erdogan government considers the Kurdish People’s Protection Units (YPG), not Assad, as the greater enemy. The YPG makes up the bulk of the US-backed Syrian Democratic Forces (SDF).

The Turkish turnaround on Assad occurs as Ankara and Tehran find themselves increasingly aligned in Iraq and Syria, a trend we have followed closely. One reason is opposition to the independence referendum by the Kurdistan Regional Government of Iraq, scheduled for Sept. 25. Syria, the United States, Russia and many other countries also oppose the referendum.

Iraqi Kurdistan President Massoud Barzani is resisting international appeals to postpone the referendum, despite the costs this may be incurring in previously warm ties between Erbil and Ankara. To make matters worse, Mahmut Bozarslan reports that the Turkish government closed the office of the Patriotic Union of Kurdistan (PUK) in Ankara, following the reported abduction of Turkish intelligence agents by the Kurdistan Workers Party (PKK) in PUK territory.

Hamidreza Azizi writes that although Iran and Turkey both oppose the referendum, their security coordination in Iraq is complicated. Tehran is not willing to either support or join a Turkish military operation against the PKK in Sinjar and the Qandil Mountains “because on the one hand, the Iraqi government has been repeatedly opposed to any Turkish military presence inside [Iraqi] territories, and on the other hand, Iran is not about to provide Turkey with more room for maneuvering in Iraq.”

“Instead,” Azizi writes, “a more probable scenario is for the two sides to start identifying their zones of influence in Syria, while continuing their coordination to achieve their common goals. This could involve Iran’s green light to a new Turkish operation in northern Syria against the Kurdish groups and Ankara’s consent to the advance of the Syrian army and pro-Iran forces in eastern Syria, especially in Deir ez-Zor. In this case, the Turkish operation would prevent the formation of a unified Kurdish entity in the north, while the developments in the east would restrict SDF forces to the areas around Raqqa, stopping them from stretching their gains farther to the east.”

Azizi explains how Russia may be more follower than leader in this trend, but is nonetheless on board. “Although Moscow has so far tried to represent a rather neutral stance toward the Kurdish issue in Syria and even to establish close links with certain Kurdish groups, it now sees a common interest with Ankara and Tehran in preventing further Kurdish advancements in Syria,” he writes. “The fact that the SDF is a US-backed force means that their final control over Raqqa could provide Washington with more influence over the future of Syria, which is in no way in Russia’s favor."

Developments arising from this, Azizi writes, "could pose a direct threat against the Russian military bases [in Syria], especially if the Kurds grant the United States a military base in the area. This could clearly explain why Russia has extended its air support for the Syrian army to the eastern parts of Syria.”

This column wrote back in July that Russia might “undertake an outwardly passive and inwardly supportive role that allows the regional parties to take the initiative against the Syrian Kurds or others. Moscow might see that as the winning hand.”