Iran draws line in the sand in Syrian desert 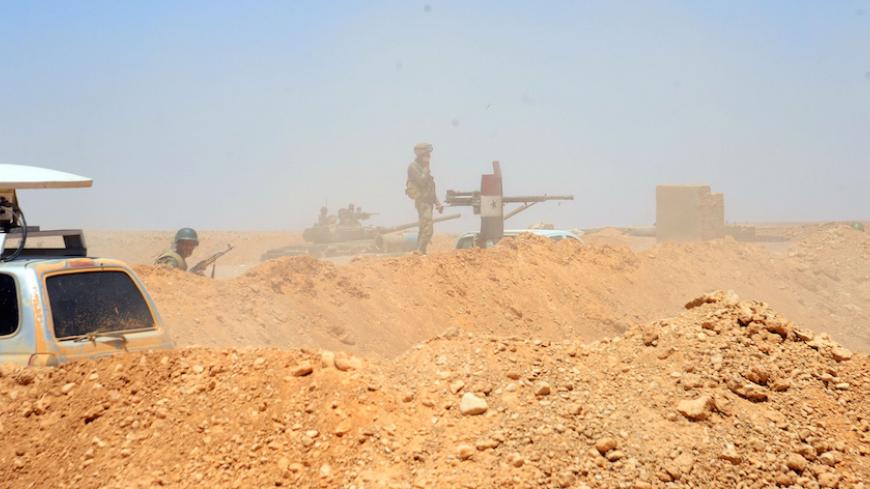 Ali Hashem writes, “The war for the Syrian Desert is in fact a war for the heart of the Middle East. The Iranian-led coalition in Syria is racing against the US-backed forces there, as both seek to defeat the Islamic State (IS), the group that has shaped the face of the region for the last four years. It is a war in the desert to draw a line in the sand, some might say, or a war to draw a line across borders and connect four capitals: Tehran, Baghdad, Damascus and Beirut. Hence the battle is between two different regional and international agendas, with each side viewing the other as the real threat after the defeat of IS in Iraq’s Mosul and Syria’s Raqqa.”

He continues, “The Tehran-Beirut route is a symbolic connection, one that announces that the Iran-led resistance axis is intact, as it was before the eruption of the Syrian revolution in 2011 and IS’ capture of Mosul in June 2014. That said, from the Iranian point of view, the regional stage is now different.” The advance of Syrian forces has been “concomitant with progress toward the same border by the PMU [Popular Mobilization Units] in Iraq, led by Abu Mahdi al-Muhandis, who announced on June 10 that his forces had reached the frontier and ‘liberated 4,200 square kilometers [1,622 square miles] and 142 villages.’ Of note, however, his forces have no intention of entering Syrian territory.”

A US airstrike on Syrian positions in al-Tanf on June 6 is a sign that the United States and Iran are taking sides on opposite sides of this latest fault line in the region. Arash Karami reports that Iran on June 18 for the first time launched missiles against IS positions in eastern Syria. “The timing of the strikes,” Karami writes, “has led some to believe the message was also intended for the new US administration, which is adopting a policy of regime change for Tehran and is reportedly seeking to confront Iran militarily in Syria.”

Hashem explains that the notion of a “road link” or “land bridge” from Tehran to Beirut “might, however, be an overstatement or a bit of hyperventilating analysis, given that in the past Israeli fighter jets have on several occasions hit alleged arm supplies near and around Damascus. A longer route, mainly through a no man's land in remote areas of Iraq, is likely to be vulnerable to hits by the Israeli or US air forces, not to mention possible attacks by insurgents, including IS.”

The battle for eastern Syria introduces further complexity, and uncertainty, about the role of Iraq, which faces pressure from both Tehran and Washington. While the battle against IS on the Iraqi side of the Syrian desert border is being led by the Iranian-backed Popular Mobilization Units, Iraqi Prime Minister Haider al-Abadi is walking a tightrope between Saudi Arabia and Iran, Omar Sattar writes.

Abadi visited Riyadh on June 19 and Tehran on June 20, and he may be seeking to defuse tensions between the two countries, without upsetting either.

Arash Karami reports that Abadi and Iranian leaders discussed a shared concern about plans for a referendum on independence by the Kurdistan Region of Iraq. It is hard to envision Iraq staying neutral, let alone antagonizing Iran, given the stakes in Syria.

The US alliance with the Syrian Democratic Forces, made up primarily of the Kurdish People’s Protection Units (YPG), is also at a “critical juncture,” according to Fehim Tastekin.

“In an unusual move, Kurdish officials have made statements supportive of Riyadh regarding its tension with Qatar,” Tastekin reports. But these comments may reflect a broader unease about what comes next, given the many interests, actors and high stakes in play. He continues, “A senior YPG commander who spoke to Al-Monitor on condition of anonymity said the YPG is ready to go to anyplace in Syria to fight IS, but they will not agree to any alliance beyond that. He said the Kurds see Iran as a problem but will not become part of a battle against it. They have no plans to move to al-Tanf, he said.”

Adnan Abu Amer writes this week that the demand by Saudi Arabia and the United Arab Emirates that Qatar sever ties with Hamas carries risks for the Gaza Strip, and could push Hamas further into the Iranian camp.

“Hamas spokesman Hazem Qassem told Al-Monitor that the knife could cut both ways. Arab division and tension in the region could tempt Israel to take advantage of the situation and move against the Palestinians, or, as Qassem put it, ‘commit crimes’ against them in Gaza,” Abu Amer reports. “’Hamas hopes this Arab crisis will [soon] come to an end, because it mainly serves Israel, and the movement stresses that any Israeli escalation against Gaza would be met with all the resources it can get to defend the Palestinian people,’ Qassem said. ‘The ongoing blockade on Gaza would lead Palestinians to confront their true oppressor, the Israeli occupation. Hamas is greatly offended by the hostility and pressure by the Palestinian Authority, Israel and some regional parties.’”

Abu Amer, reporting from Gaza, observes that “an increasing number of Israeli surveillance drones have recently been flying over Gaza at low altitudes, and daily episodes of violence are taking place between Palestinian demonstrators approaching Gaza’s eastern border and Israeli soldiers on the other side. One Palestinian was shot and killed June 6 when Israeli soldiers fired on the protesters.”

Abu Amer concludes, “Hamas has largely remained silent about the Gulf crisis, perhaps not wanting to provoke Arab states' hostility. The movement's leadership may well recognize that with the political, financial and military shadows cast by the Gulf crisis, it should forgo any military confrontation with Israel for the time being. Hamas alone, however, does not control the situation in the Gaza Strip. Israel, Egypt and the PA also have a say, and they have not hidden their hostility toward Hamas. This raises the possibility of their potentially seizing the opportunity to eliminate it once and for all.”

This column, commenting on Abu Amer’s reporting earlier this month, noted that the “US-Saudi-Islamic summit forced a rethink by the Hamas political leadership” in favor of support for Iran’s resistance axis.