The United States and Kurds currently share a partnership of convenience in Syria, but Kurds are looking ahead warily to the role they might be asked to play as US policy evolves. 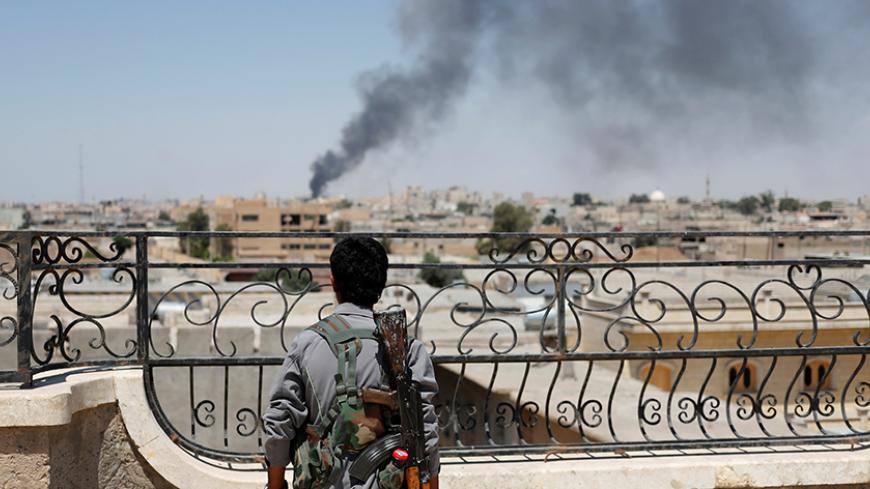 A Kurdish fighter from the People's Protection Units looks at smoke after a coalition airstrike in Raqqa, Syria, June 16, 2017. - REUTERS/Goran Tomasevic

US President Donald Trump is wavering between members of his team who want to expand the war in Syria by also targeting Iranian-linked elements and those who say such a step would mean endless conflict in the region. This internal US disarray further complicates already-complex field developments in the Syrian civil war and the battle against the Islamic State (IS).

Whichever way US policy in Syria moves, it's clear there will be no changes in its position on the Kurds. Beyond driving IS out of Raqqa, the United States appears to have long-range plans for the Syrian Democratic Forces (SDF), in which the Kurdish People’s Protection Units (YPG) play a significant role.

Numerous claims are circulating that the United States will deploy forces to Syria's Tabqa base, which has been liberated from IS; that the YPG will be sent to al-Tanf base on the Iraq-Syria border, where Jordanian-based forces opposed to the Syrian regime are operating; and that after Raqqa the next target will be Deir ez-Zor, and Kurds will be tasked with challenging the Iranian elements. Those ideas — combined with the pro-Saudi position the United States has adopted in the crisis with Qatar — inevitably lead to the question of what's next for the US-Kurdish partnership.

A senior YPG commander who spoke to Al-Monitor on condition of anonymity said the YPG is ready to go to anyplace in Syria to fight IS, but they will not agree to any alliance beyond that. He said Kurds see Iran as a problem but will not become part of a battle against it. They have no plans to move to al-Tanf, he said.

Erbil-based news agency Basnews contradicted the YPG commander, reporting that on US demand the YPG will send forces to al-Tanf military base in the Syria-Jordan-Iraq triangle and that Kurds will have a role in restraining Iran-affiliated groups. Basnews reported that American forces concluded a 10-year cooperation agreement with the YPG.

In an unusual move, Kurdish officials have made statements supportive of Riyadh regarding its tension with Qatar. A Saudi-led coalition of Gulf states and Egypt cut ties with Qatar earlier this month, claiming Qatar supports terrorist groups — a claim Qatar denies.

But a few days later on June 8, Syrian Democratic Assembly co-chair Ilham Ahmed told Saudi newspaper Al Riyadh, “Saudi Arabia is a brotherly country of Syria and is important for the Muslims.” About the Qatari role in Syria, she said, “Qatar, like several other countries, could have played a positive role in resolving the crisis, but its support to [some opposition groups over others] caused splits among [the opposition] and opened the way to extremism and terror in Syria.” As for Iran’s role in Syria, she said, “There is no room for sectarian and nationalist projects in Syria.”

Salih Muslim, co-chair of the Kurdish Democratic Union Party, also spoke to the same newspaper. He said that Iran, like Turkey, is hostile toward Kurds and fears they will gain rights in Syria.

Previously, Kurds had blamed the Saudis as much as Qatar and Turkey for emboldening jihadist groups in Syria. Kurds warned that the spread of Wahhabi ideology (strict fundamentalism) would harm the region. Kurds have always been suspicious of Iran and said Iran had participated alongside the Syrian regime in clashes against Kurds in Rojava. Nevertheless, Kurds did not openly challenge Iran.

The Kurds' balance shifted to favor the United States as Americans intervened to end Turkey's increasing attacks against Rojava. When the nature and scope of the partnership with the United States changed, the Kurds — who until then had hesitated to participate in an operation against IS in Raqqa — crossed to the south of the Euphrates River as part of the SDF. They took the Tabqa base from IS and made moves to slow the advance of the Syrian regime's army, thus abandoning their cautious handling of Syrian and Russian interests. It was then evident that the Kurds definitely opted to ally with the United States.

But the YPG commander who spoke to Al-Monitor was more cautious. Referring to operations away from the Euphrates, he said, “Americans had a plan for al-Tanf, but that was foiled when Syrian-Iranian forces reached the Iraqi border first. Americans wanted to transfer allied forces in Jordan to Deir ez-Zor. If they could have done that they would have become our neighbors. But they cannot ask such a move from the Kurds. We can’t send out forces elsewhere. Of course, we want to expand the battle against terror. We are willing to form a joint front, but we can’t transfer our forces.”

Asked about the reports of a 10-year accord with the United States, the YPG officer said, “There is no such agreement. Of course, there is a kind of partnership on the ground. The US support has assumed serious dimensions, but it has not become based on any official document. Actually, this is the contradiction in our relationship with the United States. We do everything together, but nothing is done officially.”

As to the pro-Saudi declarations of some Kurdish leaders in the crisis with Qatar, he said, “We expressed a political reaction in view of the chaos. I don’t think this was the appropriate attitude. Saudi Arabia is as responsible as Turkey for the chaos in the Middle East. They are enemies of the Kurds. I think our people felt like saying something as required at the time. I don’t think ours is a strategic decision.”

Asked about the Kurdish response to the possible US demands to curtail Iranian influence in the region, the senior YPG commander said, “It is strategically and ideologically wrong to set up an alliance against Iran similar to the one set up against [IS]. We cannot line up with imperialist forces, neither with bigots. We have serious projects for the Kurds and also for the future of Syria, starting with democratization of the country. That is our goal. The United States doesn’t care. We are wondering whether the international partnerships we have entered into will help implement this major project.”

The YPG commander, responding to claims that the United States will deploy to Tabqa, also mentioned the Kurds' meeting June 17 with the Russians at Syria’s Khmeimim air base, saying, “The United States above all coordinates with Russia. They bargained with Russians, not with the Kurds, about Tabqa. Two forces drive politics in Syria: the United States and Russia. We are working for the integrity and democratization of Syria. That is why we are ready to fight at any corner of Syria. Russians are criticizing Kurds not because of Raqqa, but Tabqa. Two days ago, we sat down with them at Khmeimim to ease their concerns. They don’t mind [us coming] down to the Euphrates but reject our crossing to the south of the river. We came down 25 kilometers; they told us the Euphrates is a natural boundary we shouldn't cross. But this is a boundary between the United States and Russia. I said to them, ‘Don’t draw a boundary. We also want to reach Damascus. To draw a boundary is a scenario to divide the land. You are drawing such a boundary.’ The Russians were surprised by our reaction. They have to understand that our problem is not only autonomy for the Kurds.”

Asked how he would respond to charges that Kurds are the ones who brought the United States into Syria, he said, “Yes, the United States entered the region with Kurdish support. They couldn’t have done it otherwise. But that partnership with the United States has helped to extricate the Kurds from the vicious circle of oppression that has been over them for a hundred years.”

Kurds are also debating the future of cooperating with the Americans, who don't bestow political recognition and who confine that relationship to a military partnership. In other words, Kurds are questioning how far they will be asked to carry the load of US policy as it evolves in the region.

The US partnership offers attractive opportunities, but it also brings with it the fear of having to face Turkey and Syria one day. Ford's warning becomes more meaningful when one adds to those fears the reactions the Kurds will inevitably face in the Arab world in the post-IS era.