In the lead-up to President Erdogan's Washington visit next month, Turkey's recent air attacks in Syria and Iraq might be a message that Turkey intends to play a more involved role in those countries. 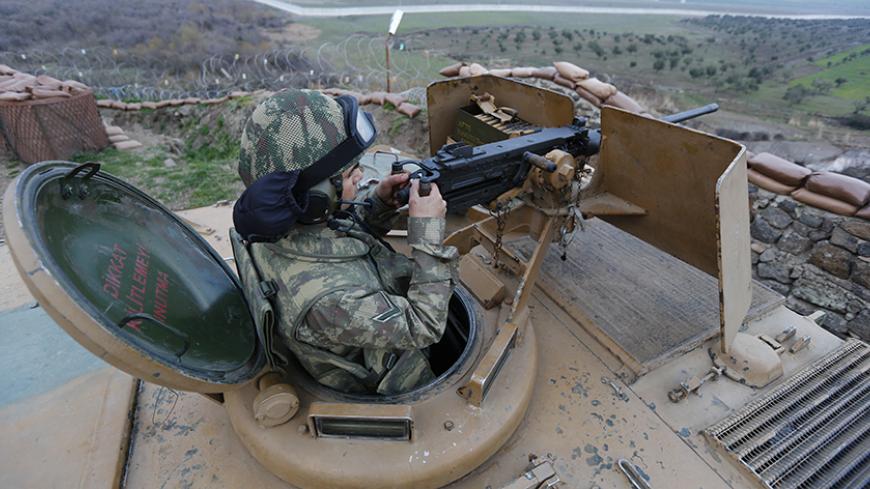 A Turkish soldier on an armored military vehicle surveys the border line between Turkey and Syria, near the southeastern city of Kilis, Turkey, March 2, 2017. - REUTERS/Murad Sezer

Turkey appears to be hoping that its bombing this week of Sinjar in Iraq and Rojava in northern Syria will enable it to intervene in those countries on a larger scale.

Since Turkey launched Operation Euphrates Shield in Syria in August 2016, attacks against organizations linked to the Kurdistan Workers Party (PKK) in Syria and Iraq have always been on the agenda. Harassment artillery fire on Rojava, an autonomous but unrecognized Kurdish area, has been constant. After the coalition of countries battling the Islamic State (IS) decided to exclude Turkey from a pending operation to retake Raqqa in Syria, Turkey's massing of troops on the border has signaled its intentions.

The YPG is working with the US-led coalition against IS in Syria. But Turkey considers the YPG a terrorist group because of its ties to the PKK. Turkey has tried unsuccessfully to convince the United States to end its affiliation with the YPG and instead work with Turkish-backed forces.

Turkey also hit five targets in the Kersey Valley and Amude village attached to Sinjar. One target was Radio Cira, which has many Yazidi listeners. Kersey had served as a refuge in 2014 for Yazidis fleeing IS. In this Turkish air attack, one militant of the Sinjar Resistance Forces (a local Yazidi self-defense unit) and five peshmerga forces were killed; nine peshmerga were wounded.

Turkey’s chief of general staff office explained the operation in a written statement: “Syria and northern Iraq are used by the PKK and its extensions to smuggle terrorists, weapons, ammunition and explosives to our country.”

After Turkey’s National Security Council declared the end of Operation Euphrates Shield, President Recep Tayyip Erdogan said operations would continue under new names and Turkey would never allow Sinjar to become a “second Qandil.” Qandil is the PKK's main headquarters in the mountains of northern Iraq. On April 4, Erdogan said, “There are efforts in Sinjar to create a second Qandil. There are now 2,500 PKK personnel at Sinjar as part of these efforts.”

Before the April 25 air attacks, Turkish newspapers were reporting a scenario of Turkish Armed Forces (TSK) entering northern Syria’s Tell Abyad to sever links between the Kurdish cantons of Rojava. According to the most widely held theory, Turkey seeks to oust the YPG from Tell Abyad, where Arabs, Kurds and Turkmens live together; entrust the region to the TSK-supported Free Syrian Army; and open it to Arab settlement.

Kurdish sources also drew attention to increased TSK military moves at Akcakale, across the Turkish border from Tell Abyad, and more frequent artillery harassment toward villages in the Afrin area. That all these moves coincide with the lead-up to Erdogan’s visit May 16-17 to Washington have added new dimensions to the situation.

What is Turkey after? What does Ankara want to achieve?

Since Turkey has decided that an autonomous entity in northern Syria under Kurdish leadership is a threat to its security, Ankara has opted for an aggressive policy. The much-publicized PKK connections of the Democratic Union Party (PYD) and its YPG military arm provide Turkey's government with ample political support domestically. In the most recent event, even the main opposition — the Republican People’s Party (CHP) — offered the government its full support. Ozturk Yilmaz, the CHP's deputy chairman, told the media, “The PKK has made a major redeployment from Qandil toward Sinjar. Turkey has to defend its border. Our struggle with the PKK is fully justified by international law. This is all very normal — actually, belated.”

The Sinjar Yazidis' support of the PKK and their increasing contacts with Rojava have amplified the perceived threat against the Turkish state. Ankara has made sure that Iraq's Kurdistan Regional Government (KRG) shares its concerns. Although Massoud Barzani, KRG president and leader of the Kurdistan Democratic Party, doesn’t approve of Turkey's attacks, he still holds the PKK responsible. “This bombing was prompted by the PKK presence at Sinjar. We are demanding the PKK forces leave Sinjar Mountain,” he said.

Although it's not the collective position of all Kurdish parties, Barzani’s approach makes Ankara feel somewhat at ease. The Barzani government’s attitude is widely reported and played up in the Turkish media, which hardly mentions the negative reactions of the Patriotic Union of Kurdistan (PUK), the Iraqi Kurdish Gorran Movement (Movement for Change), the Islamic Movement, the Islamic Union Party and the Islamic Society Party, which deplore Turkey.

Another of Turkey's major objectives, in addition to eroding Kurdish gains in the region, is to terminate the US partnership with the YPG under the umbrella of the Syrian Democratic Forces (SDF). Turkey has vehemently opposed a Raqqa operation in cooperation with the YPG and has instead offered to set up an army of 10,000 TSK-supported local fighters.

If Turkey continues such operations, the power distribution in the field is bound to change. The YPG might have to pull back its forces from around Raqqa and Tabqa to defend Rojava against Turkey. This will further weaken and stall the operation against IS in Raqqa. But this may also make Turkey's offer of a partnership more worthwhile for the United States.

Iran, Russia and the Syrian regime want the Syrian army to be the ones to liberate Raqqa, thus preventing the United States from establishing and maintaining a presence in Syria.

Meanwhile, how do the Kurds interpret the Turkish attacks?

Sipan Hemo, YPG general commander, made this assessment for Al-Monitor: "This is not an unexpected development. They were preparing for this for a long time. Certainly, major powers must have known about it. Both the Russians and Americans must have known of Turkish preparations. … We noted how the American troops working with us were upset that they couldn't stop these Turkish attacks. They went to Qarachok and mixed with the people. This was not an official decision from above, but a reflection of sentiments of their commander on the ground. In a way, it was to tell the Turks, ‘If you hit the Kurds, we are here.’ Actually, it was Russia that was controlling Turkey in Syria." But to achieve victory in Idlib, Russia "is giving the green light to Turkey. Haven’t you noticed how major rebel units that were once supported by Turkey are melting away because of this Turkey-Russia cooperation?”

As to scenarios of Turkey's army entering Tell Abyad in Syria and the local resistance it might encounter, the YPG's Hemo had this to say: “We don’t expect a ground operation against Tell Abyad," because not only is there a "sizable presence" of Kurds there, for the most part, "Arabs there won't support Turkey."

"Arabs in Tell Abyad are those who earlier escaped from Turkey-supported gangs and who returned after we liberated the town," he said. Also, "Turkmen presence isn't significant.”

Isho Gweriye, president of the Syriac Union Party and a member of the Syrian Democratic Assembly, said not only the Kurds but all peoples of the area see Turkey’s attacks as aggression. He made this assessment for Al-Monitor: “These attacks are a continuation of [Turkey's] chauvinist policies. It was important for Erdogan to go to Raqqa. But the US policies did not allow him. What Erdogan wants is for the forces now involved in the Raqqa operation to return to the north. As [SDF] units were entering Tabqa, the Turkish army stepped up its operations. This is important. Erdogan wants to disrupt the Raqqa operation and insert the Turkish forces into the operations."

He added, "All this is happening on the eve of Erdogan’s Washington trip. This is an effort to influence Washington. But it is the people of the region who are paying the highest price. It only fuels animosity between the peoples. Arabs are uncomfortable also. Our people see Turkey's moves as an occupation of our land, a violation of sovereign rights and as colonialism. Turks may get the support of a few who are promoting their own private interests, but the tribes here do not approve of Turkey’s designs.”