Iraq’s intervention may change the equation in Syria's Kurdish regions

The closure of the Fish Khabur and Rabia border crossings between Iraq and Syria may jeopardize the Kurdish federal project in northern Syria. 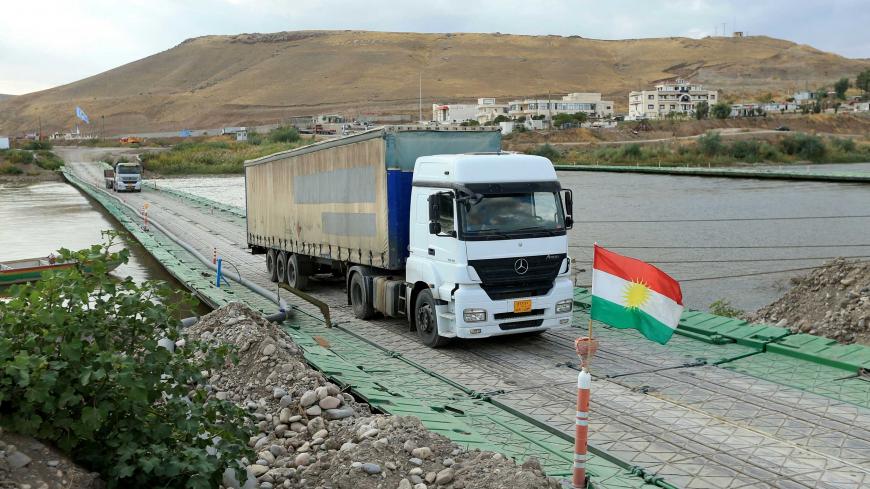 Trucks loaded with goods coming from Syria are seen at the Fish Khabur crossing at the Iraqi-Syrian border, Oct. 31, 2017. - REUTERS/Ari Jalal

Interventions by Iraqi federal forces in northern Iraq following the independence referendum held by the Kurdistan Regional Government (KRG) could imperil the Kurdish autonomy project in northern Syria. Iraqi government forces took over the Rabia border crossing to Syria on Oct. 17 and are now bargaining to share control of the Fish Khabur crossing with the Iraqi Kurds. The draft agreement put forth in negotiations with Kurdish representatives calls for joint administration of Fish Khabur by Iraqi federal forces, Kurdish peshmerga and the international coalition.

The new setup of the two border crossings will likely affect the future of the Kurdish autonomy project known as the Northern Syria Democratic Federation. Fish Khabur, on the Tigris River, is not an official crossing, but since the Kurds began to dominate northern Syria in July 2012, it has been used for crossing into Iraqi Kurdistan. The Syrian side of the crossing is called Semelka.

Under pressure from Turkey, then-KRG President Massoud Barzani closed the Fish Khabur/Semelka crossings and imposed an embargo on Rojava. The blockade was at times relaxed under US prodding to allow freedom of movement to the US-backed People’s Protection Units (YPG), a Syrian Kurdish force that was fighting the Islamic State (IS). The crossing operated generally according to the needs of Iraqi Kurdistan.

Until June 2014, when IS captured Mosul, Kurds were also using the Rabia crossing. The Kurdistan Workers Party (PKK) and other Kurds, which developed several unofficial crossings for their fight against IS at Sinjar in Iraq, thought a blockade against IS would be weakened if Rabia were to come under Iraqi federal control. At a time when Baghdad was having problems both with Ankara and the KRG, Iraq considered the PKK presence in the area as a balancing factor against the KRG's peshmerga. With this policy, Baghdad turned a blind eye to the YPG’s use of the Rabia crossing between 2012-2014, and also started to pay salaries of Yazidis organized by the PKK to fight IS.

But the unexpectedly swift rapprochement and coordination between Ankara and Baghdad in reaction to the Sept. 25 referendum upended the Kurdish calculations.

Now what is awaited is Iraq's border policy once it secures the control of Fish Khabur and Rabia. If it heeds Turkey’s demands, these crossings could become part of an embargo.

Before the recent advances of the Iraqi army and Shiite Popular Mobilization Units (PMU), one scenario discussed in Ankara was the creation of a buffer zone from Fish Khabur to Sinjar and Tal Afar in Iraq, similar to the Turkish intervention in Syria that was designed to prevent the linking of the Afrin and Kobani Kurdish cantons. Today the Iraqi army is trying to achieve a similar scenario in coordination with the PMU, which only recently was treated as a terrorist force by Turkey. The Iraqi goal is to bypass the Kurdistan Region by reactivating the pipeline that carries Kirkuk oil from Fish Khabur to Turkey’s Ceyhan oil terminal and to have access to at least a segment of the Turkish border that has been out of the Iraqi central government's control since 1991. Given Turkey’s sensitivity to the Rojava issue, such moves by Baghdad are welcomed by Ankara.

There are two other factors to consider: Iran and the United States. Iran has been tolerant of the Kurds as long as they didn’t fight with the Syrian army. But the YPG's widening of its partnership with the United States as far as Raqqa and suggestions by the Trump administration that the Kurds could play a role in blocking Iranian objectives in the region have since altered Iran’s approach. To compel the Kurds to negotiate with the Damascus regime, Iran could ask Baghdad to close the border crossings. The United States frequently used the Rabia crossing to support the Syrian Democratic Forces-YPG in their combat against IS at Raqqa. Kurds are hoping that the United States will not allow an action that will block that crossing.

Rojava, already suffering economically because of Turkey’s embargo, will suffer even more if the crossings to Iraqi Kurdistan are closed. On Oct. 28, when Fish Khabur was closed temporarily, Doctors Without Borders warned that conditions would deteriorate in the area, and that 500,000 refugees and others, particularly at Manbij, Tell Abyad, Kobani, Hasakah and Raqqa, might not be able to receive medical care.