The Qatar crisis might lead to a showdown between Israel and Hamas, with key Arab states dismissing the Islamist movement as a terrorist organization, leaving it vulnerable to Israeli attack and pressuring Qatar to drop support for it. 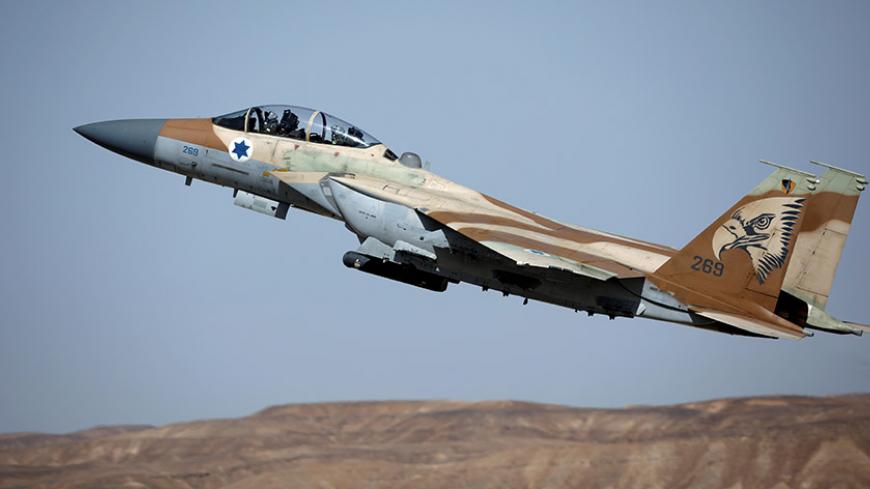 An Israeli F-15 fighter jet takes off during Juniper Falcon, a US-Israeli exercise, at Ovda Military Air Base, Israel, May 16, 2017. - REUTERS/Amir Cohen

The Gulf crisis centering on Qatar seems likely to affect the Palestinian territories in more ways than one, in particular in Gaza. Qatar's generous assistance of hundreds of millions of dollars for Gaza's development could soon come to a complete halt with Qatar being pressured by a Saudi-led coalition of other Gulf states and Egypt to cut ties with Hamas. Meanwhile, Israeli officials are warning of potential repercussions of the crisis, which has resulted in Saudi Arabia, Bahrain, the United Arab Emirates (UAE) and Egypt severing relations with Doha for allegedly sponsoring terrorism. Doha denies the allegation.

Yaakov Amidror, former head of Israel's National Security Council, speculated to Israel Hayom on June 13 that a suspension of Qatari aid to Gaza and its decision to kick Hamas political bureau leaders out of the country might leave the Islamist movement with nothing to lose, pushing it to initiate a military confrontation with Israel. In a June 11 interview with Haaretz, Israeli military expert Amos Harel also predicted that a drop in Qatari support for Hamas could prompt an escalation against Israel this summer.

Hamas spokesman Hazem Qassem told Al-Monitor that the knife could cut both ways. Arab division and tension in the region could tempt Israel to take advantage of the situation and move against the Palestinians, or as Qassem put it, “commit crimes” against them in Gaza.

“Hamas hopes this Arab crisis will [soon] come to an end, because it mainly serves Israel, and the movement stresses that any Israeli escalation against Gaza would be met with all the resources it can get to defend the Palestinian people,” Qassem said. “The ongoing blockade on Gaza would lead Palestinians to confront their true oppressor, the Israeli occupation. Hamas is greatly offended by the hostility and pressure by the Palestinian Authority [PA], Israel and some regional parties.”

On June 10, Israeli Defense Minister Avigdor Liberman said that Israel has no intention of reoccupying Gaza, but if it has to fight another war, it will not stop before eliminating Hamas’ entire military structure, regardless of the number of casualties it might inflict. On June 6, Saudi Foreign Minister Adel al-Jubeir had called on Qatar to stop supporting Hamas, prompting the movement to issue a statement the next day condemning Jubeir’s statements, calling it insulting, inciting against Hamas and charging that it could allow Israel to seize the opportunity to attack. Anwar Gargash, UAE minister of state for foreign affairs, said on June 8 that the presence of Hamas leaders in Qatar was a problem for the region.

Meanwhile, Moumin Bseiso, an independent Palestinian political analyst in Gaza, told Al-Monitor, “This is terrible timing for Hamas to be suffering the repercussions of the Gulf crisis. On the one hand, Israel is ready to pounce on Hamas in Gaza in an upcoming confrontation, which it believes will inevitably erupt soon. On the other, if Hamas [turns to] Iran for financial, political and military support, it would be in complete disregard for regional and international shifts — namely [growing] Arab and international hostility toward Iran. As a result, Hamas might not be able to survive the expected troubles and could soon find itself the target of a hard Israeli blow against Gaza.”

An increasing number of Israeli surveillance drones have recently been flying over Gaza at low altitudes, and daily episodes of violence are taking place between Palestinian demonstrators approaching Gaza’s eastern border and Israeli soldiers on the other side. One Palestinian was shot and killed June 6 when Israeli soldiers fired on the protesters.

Ahmed Yousef, a former political adviser to Ismail Haniyeh, the new head of Hamas’ political bureau, told Al-Monitor, “The regional situation in light of the Gulf crisis and the pressure exerted by some regional countries on Qatar give Israel the opportunity to launch a military strike against Hamas, destroy its military structure and eliminate some of its leaders without necessarily eradicating the movement.”

He further asserted, “Today more than ever, Israel would like to use the political situation in the region to [diminish] Hamas’ military power and undermine its resources, especially since the world would be too preoccupied with regional and international issues to pay attention to what is really happening in the Gaza Strip.”

Palestinian military expert Maj. Gen. Wasef Erekat told Al-Monitor, “The timing is not quite right for Israel to attack Hamas. It might be good timing in terms of the campaign against Qatar, which is considered Hamas’ ally, but it is not the right time to wage a war that would provoke [negative] Arab public opinion, which Arab countries wish to avoid, especially in the Gulf region. But Israel may nonetheless push Hamas’ buttons to stir up a military confrontation in which Israel would appear to be defending itself. This is an opportunity to appeal to Hamas' wise men to stop threatening Israel with any new war, because it would be a blow that the Palestinians in Gaza cannot bear.”

Hamas has largely remained silent about the Gulf crisis, perhaps not wanting to provoke Arab states' hostility. The movement's leadership may well recognize that with the political, financial and military shadows cast by the Gulf crisis, it should forgo any military confrontation with Israel for the time being. Hamas alone, however, does not control the situation in Gaza. Israel, Egypt and the PA also have a say, and they have not hidden their hostility toward Hamas. This raises the possibility of their potentially seizing the opportunity to eliminate it once and for all.