Aside from the economic benefits for Jordan from the full normalization of ties with Qatar, King Abdullah, by hosting Qatar’s emir, is looking for regional allies to confront Trump’s peace plan. 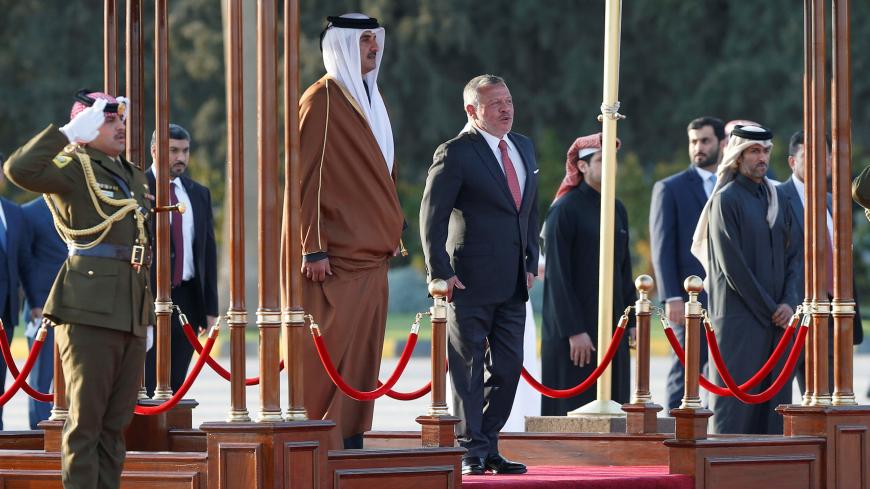 The Qatari emir concluded his visit to Jordan Feb. 24, with Jordanian pundits describing the visit as historic. The Jordanian royal court said that King Abdullah and Qatari Emir Sheikh Tamim bin Hamad Al Thani held talks that "reaffirmed the deep-rooted, brotherly ties between the two countries, and keenness to bolster them across all sectors, especially economic and investment-related fields."

The talks, according to the statement, also covered regional developments, “foremost of which is the Palestinian cause and the need to support the Palestinians as they seek their just and legitimate rights to establish their independent and viable state on the 4 June 1967 lines, with East Jerusalem as its capital, based on the two-state solution, and international law and relevant UN resolutions.”

This was the first visit by the Qatari emir since the two countries reinstated ambassadors in July 2019, following a two-year demotion of diplomatic ties. Amman recalled its ambassador to Doha in June 2017, when Saudi Arabia, the United Arab Emirates, Bahrain and Egypt severed ties with the Gulf state.

The Qatari emir’s two-day visit to Amman underlined King Abdullah’s determination to distance himself from regional blocs that weaken Arab stances, especially the Palestinian issue. It also indicates the king’s resolve to follow an independent foreign policy path that prioritizes the kingdom's interests. The king had chosen not to take sides in the inter-Gulf states’ row and has managed to maintain good ties with both sides.

The same independent approach has characterized the king’s relationship with Turkey and, to some extent, Iran. Tehran maintains full diplomatic ties with Amman, even after Jordan recalled its ambassador three years ago to appease Riyadh.

During his latest visit, Emir Thani said an additional 10,000 job opportunities would be created for Jordanians in Qatar. He also donated $30 million to support a fund for military retirees. In a tweet on the eve of his visit, the emir said that the two countries would increase cooperation in the fields of investments, sports, energy and the exchange of expertise.

Jordan and Qatar established diplomatic relations in 1972, but ties go as far back as the 1950s, when hundreds of skilled Jordanians sought work in the Gulf state in the sectors of health, education, banking and media. Today, 56,000 Jordanians work and live in Qatar, while 3,000 Qatari students study at Jordanian universities, according to figures released by the Qatari Embassy. Moreover, Qatari investments in Jordan are estimated at $1.2 billion, while about 1,700 joint Jordanian-Qatari companies operate in the Gulf state.

Jordanian exporters have suffered as a result of the economic blockade imposed on Qatar by its Gulf neighbors. A recent Jordanian study concluded that Jordan’s overland exports to Qatar have retreated 75% since the imposition of the blockade. The trade balance favors Qatar, whose annual exports, mostly oil products and chemicals, are estimated at $220 million, while Jordan’s exports, mainly fruits, vegetables and live animals, are estimated at $130 million annually.

Jordan’s Ministry of Labor announced Feb. 24 that about 4,000 Jordanians have found work in Qatar since August 2018, adding that more than 15,000 job opportunities are available for Jordanians in the Gulf state. As the local economy slows, Jordan has grappled with a 19% unemployment rate.

Aside from the economic benefits — primarily for Jordan — of the full normalization of ties with Qatar, King Abdullah is looking for regional allies to confront US President Donald Trump’s peace plan. For Jordan, the plan threatens Jordanian national security, as it abandons the two-state solution. For Qatar to come out and support the two-state solution from Amman is a boon for King Abdullah, as Qatar has close ties with the United States and Israel — though unofficially with the latter.

For the Qataris, the visit to Amman is an indication that the three-year economic blockade imposed by its neighbors has not affected its regional presence. Like King Abdullah, the Qatari emir is keen to underline his independence when it comes to conducting foreign policy.

So far, there are no signs that Jordan’s other Gulf allies, namely Saudi Arabia, the UAE and Bahrain, are taking steps against Amman for hosting the emir. Jordan’s policy of keeping all regional paths open seems to be working.