Jordan in an uneasy place over Gulf spat

Despite bitter past relations with Qatar, Jordanian officials avoided taking sides in the latest Gulf spat. 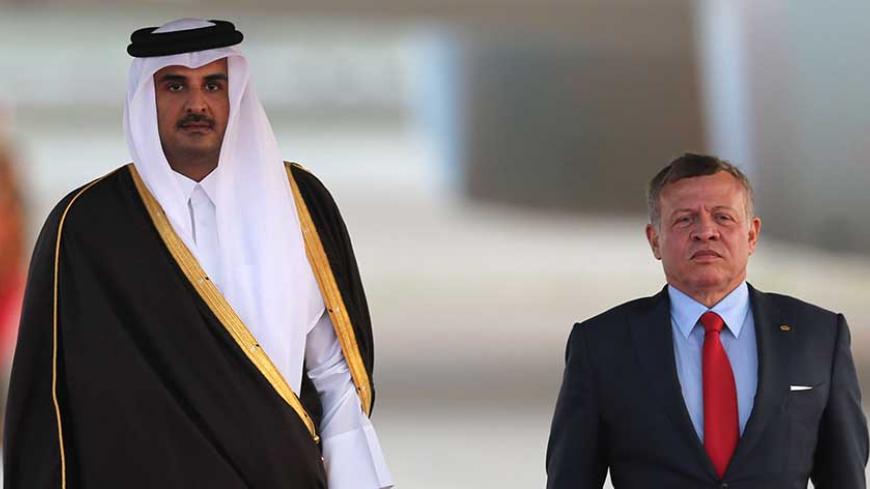 The last thing Jordan wanted was to be forced into choosing sides in the latest Gulf dispute that erupted unexpectedly June 5. Saudi Arabia, the United Arab Emirates, Bahrain and Egypt jointly severed diplomatic relations with Doha and took additional measures that included closure of airspace to Qatar Airways flights, expulsion of Qatari nationals and blocking internet access to news websites associated with Qatar, primarily Al Jazeera. The declared reasons for this unprecedented action were allegations that Qatar was funding terrorist groups and was interfering in the domestic affairs of these countries in clear violation of Gulf Cooperation Council (GCC) agreements and international law.

The traditionally cautious Jordanian diplomacy was taken aback. But it was expected to show solidarity with its Gulf allies, especially Saudi Arabia. A day later, Amman announced that it was downgrading diplomatic representation with Qatar, asking the Qatari ambassador to leave, and revoking the license of Al Jazeera's office in Jordan. But it reiterated that Qatari nationals were still welcome in the kingdom. Furthermore, Royal Jordanian flights to Doha were not interrupted. By choosing a watered-down action, Amman was hoping to satisfy Riyadh and Abu Dhabi, the two capitals leading the Qatar boycott, without having to adopt extreme actions.

In justifying the Jordanian position, government spokesman Mohammad al-Momani said June 6 that the decision to downgrade diplomatic relations with Qatar came after examining the “cause of the crisis” between Doha and several other Arab states. He added in a statement that the government “hopes that such a regretful time would come to an end and that the crisis would be solved on a solid ground.” Since then, the government has avoided making any comment on the Gulf dispute.

It was also noteworthy that no mention of the crisis was made following King Abdullah’s short visit to Kuwait City on June 13, where he held talks with the Kuwaiti emir, Sheikh Sabah Al-Ahmad Al-Jaber Al-Sabah. The emir is leading the only mediation effort to end the dispute — so far unsuccessfully.

The king finds himself in an unenviable position for a number of reasons. He is the head of the Arab Summit, which was held in Jordan in March, and will be for the rest of the year. As such, it falls upon him, at least in theory, to lead reconciliation efforts to resolve inter-Arab disputes. Instead, his visit to Kuwait was interpreted here as marking a choice not to get directly involved in the Gulf spat while lending support to Sabah’s peace endeavors.

Furthermore, the king is keen to demonstrate that Jordan maintains a moderate and independent foreign policy and that its actions underline its sovereignty as a state. Memories of the first Gulf crisis in 1990 — when Jordan, under King Hussein, was perceived as siding with Saddam Hussein following Iraq's occupation of Kuwait — are still fresh in people’s minds. Back then, King Hussein sought to find an Arab solution to the crisis and prevent foreign intervention. He refused to join a multinational military coalition gathering in the Saudi desert to evict Saddam from Kuwait. In truth, he never supported Saddam’s occupation and Jordan maintained that its position was misrepresented.

As a result, Jordan was penalized politically and economically by Gulf states for its stand. Tens of thousands of Jordanian expatriate workers were forced to leave their jobs in Gulf countries and financial aid payments were suspended. It took years, until the mid-1990s, before normal relations with Gulf nations were restored to their normal levels.

The latest crisis is seen by Jordanian officials as an unnecessary, and perhaps costly, distraction from key regional challenges that include the war on Islamist terrorism, the plight of Syria and the fate of the Palestinian-Israeli conflict, among others.

Furthermore, the crisis promises to exacerbate the state of the local economy, which has been suffering as result of high unemployment, slow growth, budget deficits and closure of borders with Iraq and Syria. Saudi Arabia has closed the only land border crossing with Qatar; this is a vital entry point for Jordanian exports, mainly agricultural produce and livestock, to Doha. One report, quoting a Jordanian spokesman for the Ministry of Agriculture, said Qatar imported 11% of the kingdom’s agricultural exports, or about 500 tons daily.

It is not that Jordan enjoys especially good ties with Qatar. On the contrary, relations between Amman and Doha have been tepid, at best, for decades. Jordanian officials fail to provide a convincing reason for the lukewarm ties with Doha. Qatar’s support for Hamas, whose leaders were expelled from Jordan to Doha in 1999, could be among such reasons, as well as Amman’s tenuous relations with the Muslim Brotherhood movement.

According to Ad-Dustour daily business editor Khaled al-Zubaidi, there are an estimated 40,000 Jordanians working in Qatar — mostly in mid- and upper-level positions. But he told Al-Monitor that he does not believe Doha will take retaliatory measures against them in response to Jordan’s actions. “Such a move will have severe harmful effects on the Qatari economy,” he said.

Over the years, the kingdom has repeatedly been subject to negative coverage from Al Jazeera, but Amman avoided taking retaliatory measures such as closing the network’s office. And when GCC countries decided to present Jordan with a $5 billion grant over five years in 2011, at the height of the so-called Arab Spring, Qatar was the only country that failed to pay its share.

Still, Abdullah continued to woo the Qatari leadership through restraint and quiet diplomacy, especially after Sheikh Tamim bin Hamad Al Thani took over from his father, who abdicated in 2013. Relations appeared to be recovering rapidly in recent months, as underlined by Tamim’s decision to attend the Arab Summit in Jordan in March.

Despite Jordan's bitter past relations with Qatar, Jordanian pundits avoided taking sides in the latest Gulf spat and expressed hopes that the row will soon be resolved. On social media, Jordanians were more forthcoming raising questions about US President Donald Trump’s role in triggering the crisis between brothers and pointing to the irony of accusing Qatar of funding terrorism, and then, a few days later, signing a $12 billion military contract with Doha.

But for Jordan, ties with Saudi Arabia and the UAE are strategically important. There are roughly 400,000 Jordanians working in Saudi Arabia whose remittances last year were estimated at $1.4 billion. The UAE is home to at least 250,000 Jordanian expatriates, many of whom occupy high-paying jobs. Both Riyadh and Abu Dhabi have traditionally provided grants and soft loans to the kingdom. During his visit to Amman in March, King Salman bin Abdul-Aziz Al Saudi of Saudi Arabia and his Jordanian counterpart oversaw the signing of several agreements, including a $3 billion deal to set up a company that will make investments in Jordan.

This is one main reason why Jordan finds itself in an uneasy position over the latest Gulf crisis. Political commentator Omar Kullab told Al-Monitor that the sticky question is what Abdullah's government would do if the Saudis and others pressure Jordan to adopt additional punitive measures against Qatar. “We can’t afford to hold the stick from the middle for long if that happens,” Kullab said.