Jordan faces tough path ahead as next Arab summit host

Jordan will face a number of diplomatic challenges in March at the Arab League summit meeting in Amman. 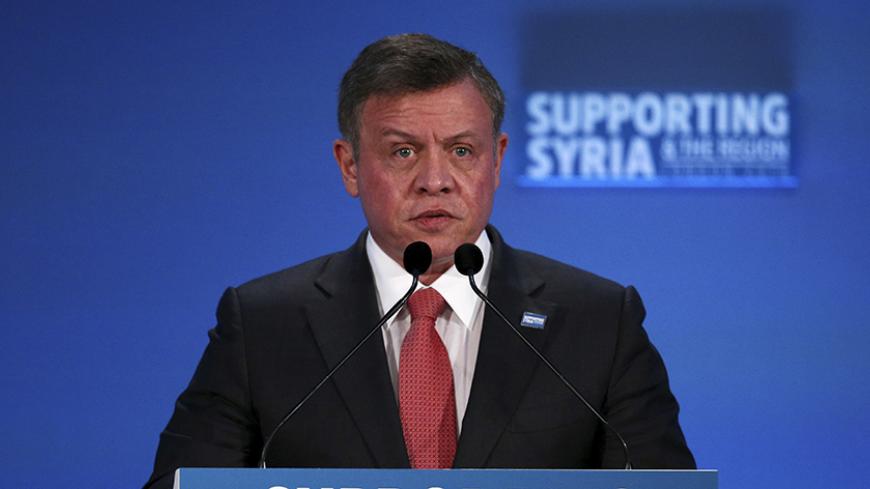 Jordanian King Abdullah II speaks at the Supporting Syria and the Region conference in London, Feb. 4, 2016. Abdullah will play host to the Arab League summit in Amman in March 2017. - REUTERS/Dan Kitwood

Arab League summits have a poor track record of success, usually underlining rifts rather than accord. Thus, under normal circumstances, the convening of the Arab summit in Amman on March 29 would be a less-than-ordinary event. These, however, are not even normal times for the region. The annual meeting of the heads of the 22 member states had originally been scheduled for Yemen, but that has been precluded by the bloody civil war raging there with no end in sight. King Abdullah II offered in October to change the venue to his capital.

The last time Amman hosted an Arab summit was in June 2001, a few months before the 9/11 al-Qaeda attacks on the United States and the ensuing war in Afghanistan. For further perspective, it was nearly two years before the invasion of Iraq and nearly a decade before the eruption of the Arab Spring. In those days, summit resolutions were predictable: condemnation of Israel and its occupation of Palestinian lands and meek criticism of Washington’s use of its veto power in the Security Council against a draft resolution to allow UN monitors to operate in the occupied territories.

For Jordan, a moderate pro-Western kingdom with a unique relationship with Israel and the Palestinians, managing Arab summits has always been challenging. For decades, Jordan supported Arab consensus and unity — something that has more recently been lacking at many crucial junctures. In November 1987, the late King Hussein headed an extraordinary summit in Amman that ended the Arab boycott of Egypt implemented after Cairo signed a unilateral peace treaty with Israel in 1979, supported Iraq in its war with Iran and brought about Arab reconciliation. It was a major achievement for the host country.

Jordan has consistently called for reforming the 70-year-old Arab League, of which it is a founding member. It has avoided being sucked into proxy confrontations and inter-Arab rivalries as it was during the first Gulf crisis and war (1990-91), when it paid the hefty price of being penalized by the Gulf states for ostensibly siding with Saddam Hussein following the Iraqi invasion of Kuwait.

The coming summit will be a test for Abdullah’s ability to craft a semblance of unity among Arab leaders. The line between utter failure and spectacular achievement will be thin. As head of the summit, Abdullah will have to deal with complicated challenges and issues: the Syrian crisis and relations with the Damascus regime, Iran’s growing regional threat, the widening sectarian rift in Iraq, the war on militant Islamist radicals, the civil war in Yemen and Libya and the stagnant peace process between Israel and the Palestinians. The summit will convene against shifting international and regional backdrops, namely, a new and unconventional US president, Russian expansion in the Middle East and the potential triumph of Syrian President Bashar al-Assad in his more than 5-year-old war against an insurgency.

At this point, it looks as if Syria’s seat at the summit will remain vacant in accordance with an Arab League resolution adopted in November 2011 suspending Syria's membership. Jordanian Minister of State Mohammed al-Momani announced on Dec. 8 that Amman will not be inviting Damascus to attend the meeting, despite Jordan being among a handful of Arab countries still maintaining diplomatic relations with the Assad regime.

In addition to the above, the summit will be held at a time when relations between two major Arab states, Saudi Arabia and Egypt, are showing perceptible signs of tension and distrust. It remains to be seen whether King Abdullah, who has close ties with the leaders of the two states, will attempt to broker conciliation. That will primarily depend on the level of attendance, which will not be known until the last minute. Only seven heads of state attended the previous summit, held in Mauritania in March of this year.

The king will be expected to play a key role in reconciling relations between Iraq and its Gulf neighbors, in addition to pushing various Iraqi Sunni and Shiite groups to end the political impasse in Baghdad, which has increased sectarian tensions in the country.

The question of Syria — in light of the recent fall of Aleppo to government forces and the possible change in policy toward Syria under a Donald Trump administration — will remain a divisive issue. A number of Arab countries, including, Algeria, Egypt, Iraq and Oman, oppose giving Syria’s Arab League seat to the opposition and want to allow Damascus to reoccupy it. Even in Jordan, a number of politicians and professional union heads have demanded that Amman invite the Syrian government to the summit, but Gulf states, especially Saudi Arabia and Qatar, would almost certainly have opposed such a move, dooming the meeting from the start.

Another challenge for Jordan, and the other Arab League members, will be the possible reversal of the United States' decades-old policy on East Jerusalem and West Bank settlements. Aside from condemning such measures, if they occur before March, Arab leaders will have no realistic response to what will certainly mean the demise of the two-state solution.

Meanwhile, as head of the summit, Abdullah will speak on his kingdom’s economic woes, made worse by playing host to hundreds of thousands of Syrian refugees. In light of low oil prices and the economic challenges facing Gulf countries, Jordan’s appeal for additional aid is unlikely to be heeded.

Arab summit resolutions have historically had little impact on the region and rarely have they risen to the expectations and aspirations of millions of Arabs. Despite the extraordinary regional circumstances that will surround the March meeting, the general mood of the public in Amman, and perhaps elsewhere in the Arab world, reflects the usual mixture of pessimism and apathy. Attempts to end the deep Arab rift are unlikely to bear fruit.