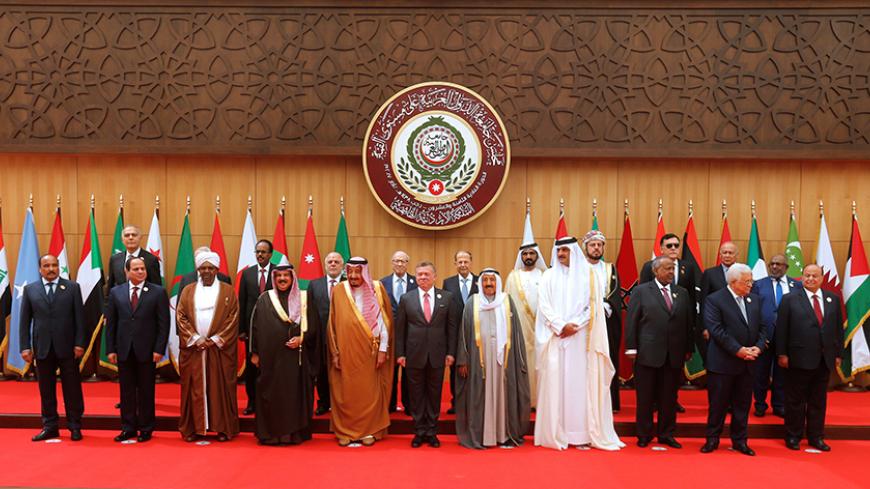 Leave it to the Jordanians to put up a good show. Jordan is second to none when it comes to pomp and ceremony, adhering to protocol, exhibiting discipline and providing the perfect stage for the annual ritual. The 28th Arab League Summit on March 29 in the Dead Sea region, attended by heads of state, in addition to prime ministers and special representatives, was almost flawless. But it was also overwhelmingly ceremonial and banal. Seventeen resolutions, none of which was controversial, had already been approved by Arab foreign ministers two days before.

It was no surprise that Arab leaders, representing the 22-strong Arab League, delivered speeches — often punctuated by platitudes and worn-out cliches — and approved the resolutions before they were scurried off to their planes perched on the tarmac of Amman’s international airport. And then they were gone.

Amman hailed the summit as a historic success. King Abdullah II appeared elated by the top-notch organization and the high-level attendance. Jordan had succeeded in imposing the agenda that it wanted: mainly reinstating the Palestinian issue as top and urgent priority, second only to the fight against extremism and terrorism. The final communique urged countries not to move their embassies to Jerusalem and condemned Israel’s unilateral measures in the Holy City and its expropriation of Palestinian lands. Amman was also successful in underlining the need to provide assistance to countries hosting Syrian refugees, Jordan being one of the biggest.

Aside from this, Abdullah was able to facilitate a side meeting between Saudi monarch King Salman bin Abdul-Aziz Al Saud and Egyptian President Abdel Fattah al-Sisi, ushering in a thaw in relations between the two countries. A trilateral meeting bringing Abdullah, Sisi and Palestinian President Mahmoud Abbas prepared the ground for the visits by the three leaders to Washington this month. Sisi met President Donald Trump on April 3 and Abdullah will meet him on April 5. With the Arab Summit reiterating its commitment to the 2002 Arab Peace Initiative and to a comprehensive settlement as a strategic choice, it is hoped that the three leaders will convey a united message to Trump on the need to resolve the Israeli-Palestinian conflict in accordance with the two-state solution.

Israel did not comment on the summit’s denunciations of its actions and the peace offerings, but its reply came in the form of an announcement on March 30, one day after the Dead Sea meeting, to build a new settlement in the West Bank.

As expected, there were no momentous resolutions by Arab leaders at the summit. Jordan was hoping to provide a platform that would offer the minimum common denominator for an accord on divisive issues such as Syria, Libya, Iraq and Iran. In that regard, it had succeeded to a certain extent as was reflected by the final communique. Bitter foes, like the leaders of Egypt and Qatar, attended the meeting, although Sisi walked out when Qatari Emir Sheikh Tamim bin Hamad Al Thani delivered his speech.

There were awkward moments, like when Lebanese President Michel Aoun stumbled and fell face down on the stage as leaders huddled together for the ceremonial photo, or when cameras caught a few leaders napping during speeches.

The final communique stressed the need for a political solution in Syria, based on UN resolutions and Geneva I principles, but avoided any mention of the future of Syrian President Bashar al-Assad. Jordan had rebuffed requests from Egypt, Algeria and Iraq to allow the Damascus government to be at the summit, but it also did not invite representatives of the Syrian opposition.

The summit sent a positive message to Iraq and its government in the hope of swaying Prime Minister Haider al-Abadi away from Iranian influence. It called on the Iraqi government to initiate a political process that achieves national reconciliation and safeguards citizens’ rights without exclusion or discrimination.

And on Libya, Jordan resisted pressures from various parties and allowed the head of the Government of National Accord, Fayez al-Sarraj, to fill Libya’s seat at the summit. The final communique urged Libyan parties to solve their differences and achieve national reconciliation based on the Sukhairat agreement of December 2015. This was an important victory for the beleaguered Sarraj government, which is fending off physical and political attacks by local rivals and regional countries.

Without naming Iran, Arab leaders condemned foreign interference in their internal affairs and attempts to stir up sectarian tensions. Such an ambiguous phrase was meant to satisfy both Saudi Arabia, which sees Tehran as a major regional threat, and members maintaining good ties with Iran such as Oman.

There were calls for steps to be taken to implement previous resolutions on building economic integration, increasing inter-Arab trade and investments, and creating job opportunities for Arab youth. The leaders also reiterated their support for the Arab League and its institutions, but such calls are repeated at every summit meeting and little work is ever done to achieve any of these goals.

Jordanians, along with other Arab citizens, now numbering over 300 million, have little faith in the 72-year-old Arab League and its crippled institutions. The majority believes the organization has become a reflection of Arab countries’ differences rather than their unity and commitment to common action. Attempts to restructure the Arab League, as a symbol of the Arab political order, have been met with failure. And when it comes to dealing with regional challenges, such as Arab-Israeli wars, the Palestinian issue, Iraq’s invasion of Kuwait and the reverberations of the Arab Spring, the Arab League has repeatedly exhibited ineptitude.

So it was no surprise that on social media Arabs mocked the fact that the Arab “summit” was being held in the lowest point on earth, and that efforts to “resuscitate” common Arab action are being done in the Dead Sea.