Arab foreign ministers' surprisingly brief meeting in Jordan likely signals disagreement over regional issues such as the return of Syria to the Arab League and a US-proposed coalition against Iran. 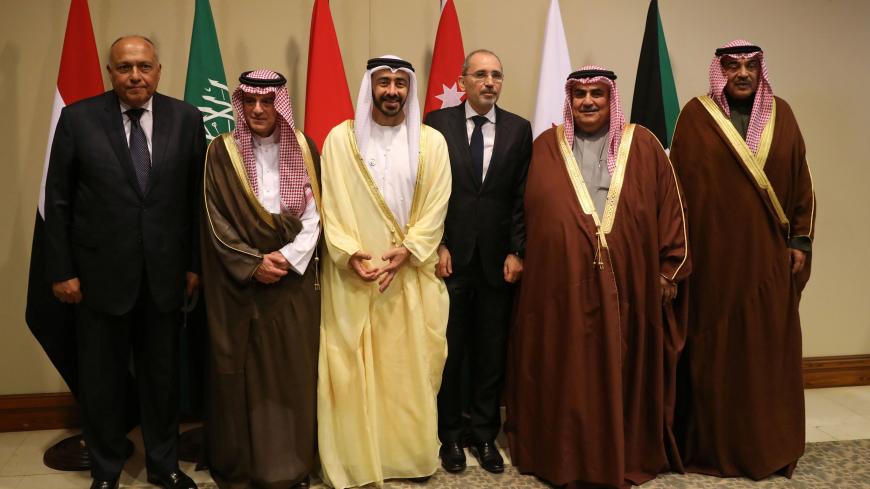 Jordan and five other Arab countries are attempting to adopt a common stand on key regional issues ahead of an international conference on the Middle East to be held in the Polish capital, Warsaw, on Feb. 13, and more than a month before an Arab League summit in Tunisia. Two particularly pressing issues under discussion are Syria and Iran.

On Jan. 31, the foreign ministers of Jordan, Saudi Arabia, Egypt, Bahrain, the UAE and Kuwait met at a Dead Sea convention center to hold consultations and go over bilateral relations and regional developments, according to a Jordanian Foreign Ministry spokesperson. A ministry statement also said the ministers exchanged ideas on ways to deal with various issues in a way that contributes to solving the Middle East’s crises and serves pan-Arab causes.

The day before, the ministers were received by King Abdullah who, according to the royal court, “stressed the importance of Arab coordination on issues and crises facing the region, further enhancing joint Arab action in the best interest of Arab countries and their peoples.”

But despite the media buildup that preceded the event, it took the ministers less than 40 minutes to wrap up the meeting before heading to the airport. There was no final communiqué and no press conference — only a brief statement to journalists by Jordan’s Foreign Minister Ayman al-Safadi, who said that the meeting was "fruitful and positive."

He added that the consultations were open and without an agenda and that the ministers had met the previous day for six hours.

Lack of further information on the brief meeting led local observers to believe that the ministers were either in full agreement on the issues discussed or the exact opposite.

There was also ambiguity regarding the issues and regional crises that the ministers had discussed. One unnamed Jordanian source had told Russia’s Sputnik on Jan. 29 that the ministers would discuss the possible return of Syria to the Arab League. Syria’s membership was suspended in 2011 following the eruption of the popular uprising.

But political commentator and correspondent for London based Al-Quds newspaper Bassam Badarin told Al-Monitor that the meeting was held in the wake of last month’s regional tour by US Secretary of State Mike Pompeo, who announced that Washington was seeking to build a regional anti-Iran alliance. Pompeo also said that the United States was planning to convene an international conference in Warsaw to discuss Iran’s regional and international threats.

Badarin said that Jordan and Egypt, in particular, may not like being forced into an anti-Iran coalition. “But what choice do they have?” he added, pointing to pressure from Washington on its Arab allies.

Since Pompeo’s statements on forming a regional military coalition and the Warsaw conference, there has been no comment from any of the six countries whose top diplomats met in the Dead Sea.

Professor of political science at the University of Jordan Hassan Barrari was quoted by Arabi21.com Jan. 31 as saying that the six countries do not share priorities. “Jordan does not see Iran as a threat, while Israeli policies, the [US President Donald] Trump peace plan and the demise of the two-state solution are,” he said. “This is not Saudi Arabia’s position, which sees Iran as the main regional threat, and in the meeting, the Saudis will have the final say,” Barrari added.

Jordan's former Deputy Prime Minister Mamdouh al-Abbadi was quoted by Sputnik on Feb. 2 that the Dead Sea retreat was “unsuccessful.” He said that there were differences and that Saudi Arabia’s position on the return of Syria to the Arab League was negative.

In contrast to Riyadh’s position, the UAE and Bahrain recently reopened their embassies in Damascus. Jordan, which kept its mission open throughout the Syrian crisis, decided on Jan. 22 to appoint an acting chargé d’affaires at its embassy in Damascus.

Following the Jordan meeting, a number of Arab foreign ministers, including those of Jordan, Egypt, Saudi Arabia and the UAE, flew to Brussels Feb. 4 to participate in an EU-Arab ministerial meeting about, among other things, normalizing Arab relations with Damascus. Arab League Secretary General Ahmed Aboul Gheit, who attended the meeting, said Feb. 4 that there was no Arab consensus on Syria’s return to the pan-Arab organization.

Saudi Arabia’s Minister of State for Foreign Affairs Adel al-Jubeir was quoted by Arab News daily on Feb. 4 as saying, “We are consulting with the Arab countries for a result that includes the implementation of UN Resolution 2254.” That resolution, which the EU is calling to be implemented as a condition for normalizing ties with Damascus, demands that the Syrian regime take steps toward a political settlement to the crisis, something that the regime is resisting.

On the same day of the Brussels meeting, Syria’s Deputy Foreign Minister Faisal al-Miqdad was quoted by a Lebanese website as saying that those trying to impose conditions on his country’s return to the Arab League will not succeed.

The contentious Syrian file will almost certainly take center stage in the Arab League’s upcoming summit in Tunisia March 31. With a number of countries such as Lebanon, Iraq, Oman and Algeria publicly calling for the restoration of Syria’s membership and others undecided or opposed, the issue is likely to jeopardize the summit’s success.