The Syrian regime's detention of Jordanian citizens reflects the reality that Jordanian-Syrian ties have a long way to go before normalization. 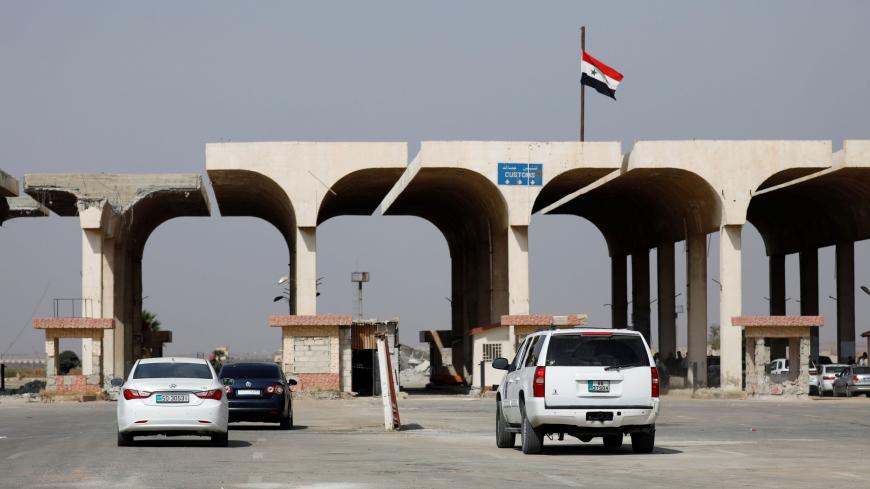 Civilian cars from Jordan pass into Syria at the Nasib border crossing with Jordan in Deraa, Syria, Oct. 15, 2018. - REUTERS/Omar Sanadiki

Hopes for a smooth resumption of ties between Jordan and Syria, which hit rock bottom following the eruption of the Syrian crisis in 2011, have been dashed over the fate of Jordanian citizens arrested by the Syrian authorities since the reopening of a land border last October.

On April 9, Jordan’s Foreign Ministry announced it had received assurances from its embassy in Damascus that the Syrian authorities would release eight Jordanian detainees. The news came five days after the ministry had summoned Syria’s charge d'affaires in Amman for the fourth time to protest the detention of Jordanians who had earlier crossed the border. On April 10, the ministry confirmed that four out of 55 Jordanians detained in Syria have been released.

Thousands of Jordanians had crossed the border into Syria since last October, while the two countries exchanged parliamentary visits in what was seen as a positive sign of a warming of bilateral ties. A nine-member parliamentary delegation visited Damascus in November 2018 and was later received by President Bashar al-Assad. And on Feb. 27, a Syrian delegation of lawmakers arrived in Amman to participate in an Arab parliamentary conference. It was the first visit by Syrian officials to the kingdom since 2011.

Other steps signaling a thaw in ties with Syria included the visits by delegations representing Jordanian businessmen to Damascus seeking to improve economic ties, while Amman announced in January that it was upgrading its diplomatic presence in Damascus. In February, the local aviation authority allowed Jordanian civilian aircraft to use Syrian airspace.

Observers here believe that Amman was also working behind the scenes to resolve the issue of Syria’s return to the Arab League ahead of an Arab summit that was held in Tunisia in March. An impromptu short meeting hosted by Jordan Jan. 31 and attended by the foreign ministers of Egypt, Saudi Arabia, Kuwait, Bahrain and the United Arab Emirates is believed to have addressed Syria’s possible return to the Arab League, among other issues. But differences over this issue prevented an agreement.

Syria’s detention of a number of Jordanians visiting the country had put pressure on the Jordanian government, which initially tried to resolve the issue discreetly. But coming under public pressure, the Ministry of Foreign Affairs issued a stern statement April 4 calling on the Syrian government to immediately release more than 30 Jordanians. A spokesman for the ministry said that if the Syrian government had reservations regarding any Jordanian wishing to enter the country then it should return him to Jordan; but to allow him to enter and then arrest him is totally unacceptable, especially since the number of those detained has been rising.

The ministry’s statement underlined the reality that Jordanian-Syrian ties have a long way to go before becoming normal. Adding to the controversy is the reaction of one pro-Syrian Jordanian lawmaker, Tarek Khoury, who, on April 7, attacked his own government. He said that the Syrian government was about to release 28 detainees but that the ministry’s statement, which he described as “undiplomatic and poisonous,” has delayed such a step. Khoury also said that some of the detainees include members of the Islamic State and others working for the Qatari news channel, Al Jazeera.

There has been no news over the fate of the rest of the Jordanian detainees since April 9. But analysts here believe that the state of bilateral ties with Damascus was discussed during an April 7 visit by Russian Foreign Minister Sergey Lavrov to Amman. The analysts say that Amman, as well as Cairo, continue to support the principle of restoring Syria’s membership to the Arab League, but want to see positive steps taken by Damascus.

Jordan is working with Russia to end the plight of thousands of refugees trapped in al-Rukban area on the Syrian side of the border with the kingdom. Jordan is also seeking Moscow’s help to facilitate the return of more than 600,000 Syrian refugees in the kingdom. Jordanian businessmen also hope to have a share of the multibillion-dollar contracts expected for Syria’s reconstruction in the future.

Meanwhile, Jordan is waiting for a positive sign from the Syrian side over the detainee issue. Nidal al-Taani, chairman of the Foreign Relations Committee in the Jordanian lower house of parliament, told Al-Monitor that the kingdom is looking to have special relations in all fields with Syria, especially at this sensitive stage. But he reiterated the government’s position that the issue of detaining Jordanians is a major stumbling block. He added that the number of detainees has increased since the reopening of borders.

Writing in al-Ghad daily April 11, political columnist Maher Abu Tair said Jordan is to blame for not warning its citizens of the risk entailed in visiting Syria. He added that the Syrian regime does not care about the fate of over 1 million Syrians living in Jordan, so why should it bother about a few Jordanians in its prisons? “The fact is that Syria is holding a grudge against Jordan believing that we had supported the chaos there … and it wants us to come on our knees asking for forgiveness,” he said.

He concluded by saying that the crisis proves that restoring normal ties between the two countries will take a long time.