The Syrian and Jordanian governments appear to be moving forward with normalizing relations, with the resumption of official visits and talk of cooperation. 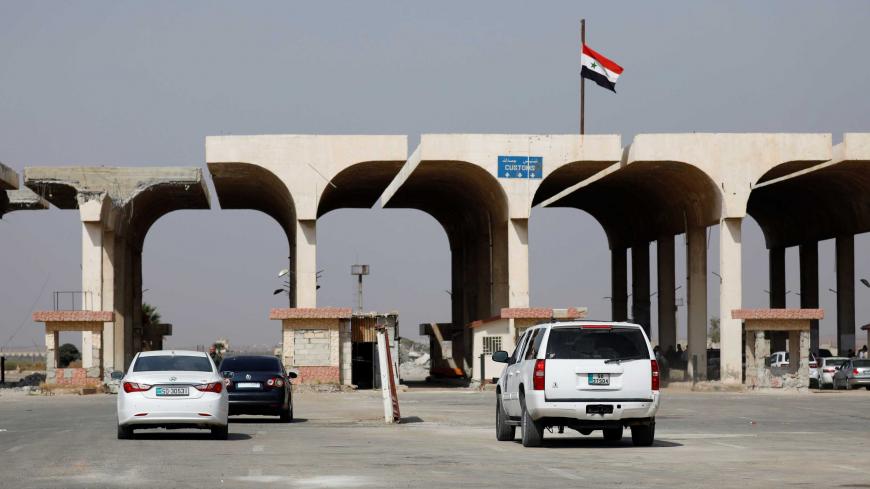 On Oct. 15, Jordan and Syria reopened a vital land border closed since 2015, and almost a month later, on Nov. 19, a Jordanian parliamentary delegation set out for Damascus in what both countries viewed as a major step toward restoring normal relations, which had broken down with the outbreak of the Syrian crisis in 2011. Syrian President Bashar al-Assad received the nine-member Lower House delegation, headed by veteran parliamentarian Abdul Karim al-Dughmi, the day they arrived.

Speaking to the Jordan Times after the delegation’s return to Amman on Nov. 25, Dughmi described the visit as a “complete success” on all fronts, adding that discussions with Assad dealt with restoring Jordanian-Syrian relations to a level “as strong as they were before 2011” and with Syria’s return to the Arab League. In addition, according to Dughmi, talks with Assad and other Syrian officials covered trade, transport and tourism and the issue of Jordanian prisoners in Syria.

“We had very brotherly discussions with President Assad, who began by conveying his greetings to His Majesty King Abdullah and all Jordanians, underlining his keenness on fostering strong relations with Jordan,” Dughmi was quoted as saying.

In an interview with Russia’s Sputnik news agency in Damascus on Nov. 21, Dughmi said that he had discussed the issue of Jordanians detained in Syria with Assad and Syrian Minister of Justice Hisham al-Shaar. He added that Assad had promised to release and pardon most of the Jordanians being held in Syrian prisons and had asked his visitors for a list of their names. A day later, Jordanian news sites reported that on Assad's orders, Syria had released a Jordanian who had been detained for about a month.

One parliamentarian, Qais Zayadin, was quoted by Ammonnews.net as saying that Shaar had told the delegation that reports of Damascus having a list containing thousands of names of Jordanian nationals wanted in Syria had been fabricated.

Observers in Amman believe that the parliamentary visit could not have taken place without a nod from high-level officials. It was reported that while the parliamentary delegation was in Damascus, Jordan’s transport minister, Walid al-Masri, had on Nov. 21 sent an official invitation to his Syrian counterpart there, Ali al-Hmoud, to come to Amman to discuss ways to reactivate the Jordan-Syrian Land Transport Co., whose work was suspended when the border closed. Hmoud's visit to Amman would be the first for a Syrian government official since 2011.

The thaw in relations between Jordan and Syria follows in the wake of major military victories by the Syrian army this year, in particular its capture of the southern province of Daraa in July. Russia has been pushing the two sides to reopen their border and facilitate means for the repatriation of Syrian refugees from Jordan. On Dec. 2, Al-Mamlaka TV cited a Russian Defense Ministry report that more than 25,000 Syrian refugees had returned through the Jaber/Nasib border crossing since July. According to statistics compiled by the United Nations, more than 600,000 Syrian refugees are registered in Jordan.

Jordanian businessmen are hopeful that reopening the borders will give the stalled Jordanian economy a much-needed boost and provide them opportunities to participate in future reconstruction projects in Syria.

Jordan has softened its rhetoric on the Syrian crisis since Russia intervened in the civil war in 2015, with King Abdullah II and senior officials underlining the need for a political solution that guarantees the territorial integrity of the country. On Nov. 23, Jordanian Foreign Minister Ayman al-Safadi was quoted as saying that reaching a political solution is inevitable and would restore Syria’s crucial role in the stability of the region.

While most Jordanians welcomed the reopening of the border with Syria, they remain divided over the future of bilateral ties. Writing in Addustour on Nov. 26, political analyst Oraib al-Rantawi pointed to opponents of normalizing ties with Syria, especially among members of Islamist streams in Jordan, who have supported the Syrian uprising. On the other side are pan-Arab leftists, who support the latest overtures toward restoring full relations.

Rantawi believes the majority of Jordanians are pragmatists who support a gradual normalization that serves Jordan’s security, economic and political interests but at the same time do not necessarily support the policies of Damascus. “We have relations with many governments whose policies we do not agree with, like Israel for example,” Rantawi wrote. “What is important is to secure our national goals, and if that means opening slowly to Syria, then why not?”

Another Addustour columnist, Maher Abu Tair, wrote on Nov. 26 that Jordan will take small steps toward restoring ties with Syria in accordance with Arab, regional and international circumstances. “What is important, and as President Assad said, is that we have to look ahead and not to the past, and this is a good message that we should build on,” Abu Tair wrote. “The Syrian issue is a regional one as well, and we are part of the region, and moving forward is tied to common Arab challenges, such the crisis with Iran.”

The sudden warmth in bilateral ties may have been triggered in part by possible changes in the regional political climate. On Dec. 2, Al-Jazeera claimed that the United Arab Emirates has opened a back channel to mediate a political reconciliation between Syria and Saudi Arabia. It noted news reports that Abu Dhabi was preparing to reopen its embassy in Damascus. Jordan will be watching these developments as it ponders its next gesture toward Syria.