With fighting appearing to wind down in Syria, talk has begun of normalizing ties between Jordan and Syria, but the matter is not so straightforward for Amman. 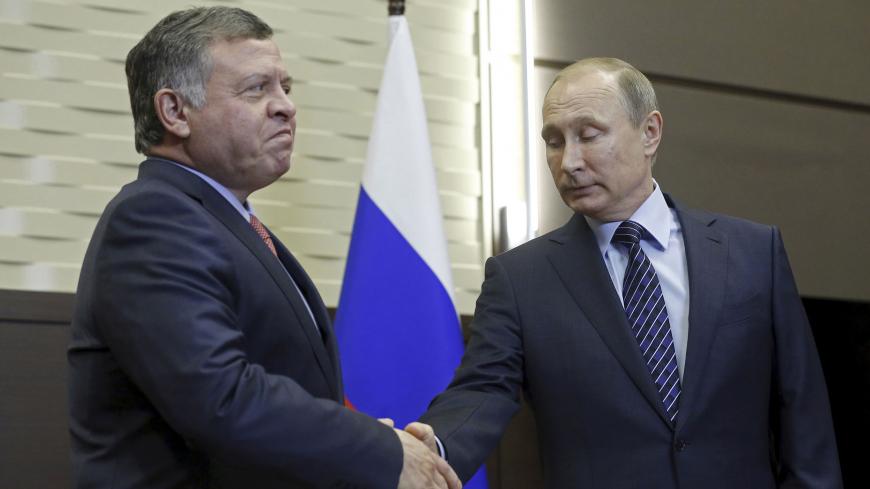 With the Syrian army extending its control over most of southern Syria, including along the border with Jordan, Jordanians are divided over the possibility of normalizing ties between Amman and Damascus after seven years of tensions. There has been no official position taken by the Jordanian government or the Syrian regime on the issue. There are, however, signs that the two countries are considering reopening their border crossing as a step toward restoring full ties.

On July 22, Ammonnews.net, a pro-government Jordanian news site, quoted “informed sources” as noting that the decision to reopen the crossing in both directions at Nasib must be mutually agreed upon and requires coordination between the two countries. A day earlier, the daily Al-Ghad had reported Russian sources as saying that the Amman-Damascus highway was safe for travelers, since fighters from Jabhat al-Nusra had been evacuated from the area.

The Syrian army captured the Nasib border crossing, in Daraa province, on July 6. Two days later, the official Syrian news agency, SANA, announced that work had already begun on rehabilitating the highway connecting Damascus and Amman after a three-year closure resulting from rebels' seizure of the crossing point with Jordan. It said the highway will be ready for civilian traffic within a week.

The semi-official Arabic daily Addustour published a report on July 18 in which a number of Jordanian businessmen and trade organizations called on the government to reopen borders with Syria. It quoted Adnan Ghaith, deputy of the Amman Chamber of Industry, as saying that reopening the border with Syria will revive Jordan’s economy, which had suffered as a result of the closure of the country's land borders with both Syria and Iraq.

Ultimately, however, the decision to reopen the borders in both directions is a political issue, not one based on economics. Relations between Amman and Damascus had plummeted when the Syrian uprising broke out in 2011, initially in the form of mass demonstrations, in the southern province of Daraa. The majority of Jordanians backed the demands of the peaceful Syrian protesters, and Amman's official position was sympathetic as well. The Jordanian street became polarized, however, as the uprising turned belligerent, with militant foreign jihadis, including Jordanians, thrown into the mix.

The ruthless response by the regime against its own citizens and the arrival of Iranian and Hezbollah militias to support President Bashar al-Assad deepened Jordanian divisions. In 2015, Damascus accused Jordan of training and arming Syrian rebels with the help of the United States and Gulf countries. Amman at first denied such claims, but later admitted that it had trained moderate rebels, though not to fight the regime but to prevent Islamic State militants from infiltrating its borders.

Throughout the crisis, Jordan and Syria have maintained diplomatic ties as well as military and intelligence coordination. After the Russian military intervention began in September 2015, Jordan's King Abdullah II supported Moscow’s role, viewing it as contributing to bringing an end to the crisis and allowing for a political settlement. Amman never called for the removal of Assad or for regime change.

In fact, Jordan recently played an important role in pressuring militias from the Free Syrian Army in Daraa to enter into negotiations with the Russians in early July. This evolved in tandem with a massive military operation launched by Damascus and Moscow that ended the de-escalation zone agreement negotiated last year among Amman, Washington and Moscow. The result of the two events was the controversial truce deals that ended the rebel presence in southern Syria.

Amman is now looking to Moscow to play a role in removing obstacles before moving to reset Jordanian-Syrian ties. In particular, it wants the Russians to facilitate the process of repatriating tens of thousands of Syrian refugees who had fled to the kingdom. On July 20, the Russian government presented a proposal to the United States for organizing the return of an estimated 1.7 million Syrian refugees to pre-war areas in Syria, with priority given to refugees in Jordan and Lebanon. On July 22, Al-Ghad reported that Jordanian Foreign Minister Ayman al-Safadi had discussed the issue of repatriating Syrian refugees in a phone call with his Russian counterpart, Sergey Lavrov, among other topics.

Another priority for Jordan, as well as for Israel, is to obtain Russian guarantees that Iranian militias and Hezbollah fighters will keep an acceptable distance from Jordan's borders. Such an arrangement appears to have been worked out when US President Donald Trump met with Russian President Vladimir Putin met in Helsinki on July 16.

Also for Jordan, there is the complex issue of the return of Jordanian fighters and their families from Syria. Mohammad Daoudieh, former government minister and diplomat, wrote in Addustour on July 20 that the return of 1,325 Jordanians who had left to fight in Syria and Iraq requires a security decision, not one having to do with politics. Jordan has kept its borders closed to these fighters, declaring that they can only return through legitimate routes and that they will face legal charges.

On July 22 Reuters reported that Jordan had received 800 people, including members of Syria’s White Helmets, the volunteer civil defense group, who had been evacuated from southwestern Syria in a mission Israeli officials said they facilitated. The Syrian government had in the past accused the US-backed organization of terrorism. Jordan is meanwhile under pressure to help 270 Syrian journalists and media activists trapped in rebel-held pockets in southern Syria.

The challenge for Amman will be dealing with the possible popular backlash if and when ties with Damascus are normalized. For many Jordanians, the Syrian regime is guilty of crimes against humanity and war crimes, so it is seems inconceivable to normalize relations with it. Others have expressed support for a quick resumption of normal ties, because they welcome the regime’s victory against what they consider to be foreign conspiracies.

The political analyst Labib Kamhawi told Al-Monitor that Jordan is making a special effort to re-establish trust with the Syrian regime, but that more is required to “clear the air.” He noted that Russia's role will be crucial in restoring ties. “Jordan’s policy since the onset of the crisis in Syria has been ambiguous, and the Syrians are aware of Amman’s role in Syria, but they are also conscious of the pressure it has endured from the Americans and the Saudis,” Kamhawi said.

On the polarization on the Jordanian street, Kamhawi believes that although Jordanians are divided over Assad, they are united in their support for Syria’s unity and stability. “There are blood ties and mutual economic interests, and we might even discover that those who support Assad are now the majority of Jordanians,” he concluded.