Is Jordan ready to normalize ties with Syria?

Syrian and Jordanian officials are in technical talks about reopening their border for trade purposes, but analysts have noted Amman's wariness about normalizing relations for fear of its possible effect on relations with its Arab and Gulf allies. 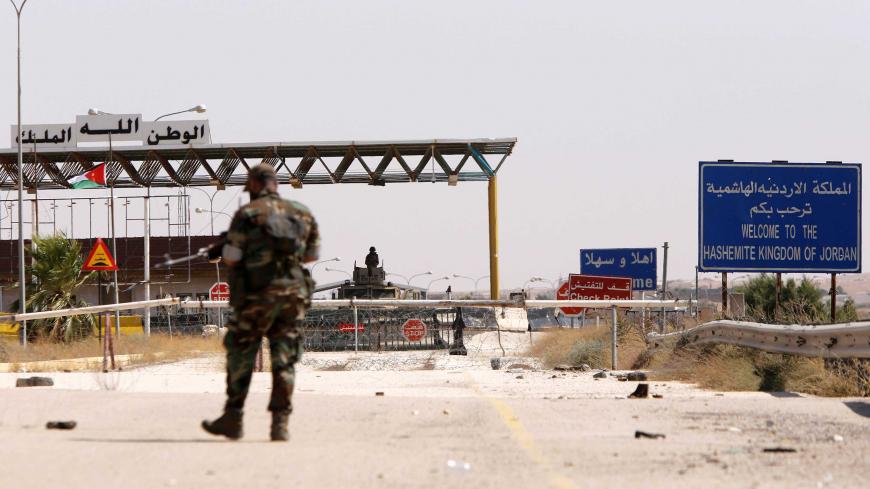 Jordanian and Syrian officials met Sept. 12 for technical discussions about the reopening of their border to commercial traffic. They were the first such talks since the border was closed in 2011, following the eruption of the Syrian civil war. While Damascus wants the talks to signal the return of normal relations with the Hashemite kingdom, Amman remains wary. Jordanian government spokesperson Jumana Ghuneimat has said the talks will continue, but has given no date for the reopening of the border.

On Sept. 4, an 80-member delegation representing the Jordanian private sector had headed for Damascus to discuss joint ventures with their Syrian counterparts after the border reopens, according to the Jordan Times. Theirs was the first such visit since the civil war began.

The day before, Atef al-Tarawneh, speaker of Jordan’s Lower House, had told Russia’s RT TV that Jordan and Syria were assessing security coordination in preparation for reopening their border. In July, the Syrian army recaptured the Nasib crossing, which had been under rebel control since April 2015.

For Jordan, the reopening of the border with Syria carries huge economic benefits. Trade between the two countries in 2010 was estimated at $750 million. For Jordan, however, Syria’s importance as a gateway to Lebanon, Turkey and Europe far exceeds its value as a trading partner. Likewise, Jordan is an invaluable doorway to Gulf markets for Lebanon and Syria.

A number of reports have claimed that Jordanian Prime Minister Omar Razzaz had sent “personal letters” to Syrian officials expressing Amman’s desire to cooperate with Damascus on reopening their border. Syria’s Al-Watan reported on Sept. 3 that Syrian officials had responded “with friendly messages,” but also requested that all communications with Damascus be through Jordan’s Foreign Ministry.

Jordanian officials have avoided making references to normalizing ties with Syria, focusing only on the reopening of the border. The two countries have maintained diplomatic ties throughout the Syrian crisis, but in May 2014 Amman expelled Syria's ambassador, Bahjat Suleiman, for having “crossed the lines in diplomatic rules,” repeatedly insulting Jordan in media interviews and on social media sites, according to a Foreign Ministry statement.

Since early 2013, the regime of Syrian President Bashar al-Assad had repeatedly accused Jordan of smuggling weapons into Syria and of training “terrorists,” meaning rebel groups. Jordan denied the accusations on more than one occasion despite various reports that Amman had, until recently, hosted a special command center from which US, Jordanian and Saudi officials monitored the southern front of the civil war and coordinated with the Free Syrian Army. Jordan has never acknowledged the existence of such a facility.

Despite tensions between Damascus and Amman, the Jordanian government has never called for Assad's removal, and King Abdullah II advocated a political solution to the Syrian crisis early on.

On Sept. 16, Syrian reports accused Jordan of insisting on conditions for reopening the border. One Syrian official was quoted as saying that the technical talks had failed, because Jordan had insisted that no Syrian trucks be allowed to enter Jordanian territory. Instead, freight must be transferred to Jordanian trucks at the border.

The reports coincided with a Syrian decision to impose additional fees on Jordanian trucks passing through Syria. On Sept. 20, Adnan Abu al-Ragheb, president of Jordan’s Chamber of Industry, said that the new fees will have a direct negative impact on Jordan’s industrial exports, making them less competitive.

Hassan Barari, a political science professor at the University of Jordan and commentator, told Al-Monitor that Amman has to address the reality of restoring normal ties with Damascus after years of bitterness.

“The king needs to appoint a special envoy to handle the Syrian file, and that person must have good ties with the Syrian regime,” Barari said. “Jordan can have a positive effect on the decision-making process in Syria. We have good relations with [Russian President Vladimir] Putin, who now has the final say in Syria.”

Barari added that Jordan has generally played its cards well in relation to the Syrian crisis. “We have no territorial ambitions in Syria, and our priority was always to protect our borders,” he said. “We should take the first step of appointing an ambassador to Damascus.”

The political analyst Labib Kamhawi sees the situation differently. He told Al-Monitor that it is difficult to restore normal ties and that even if the border is reopened, it would not represent the restoration of trust between Amman and Damascus.

Kamhawi asserted, “There are pressures to open the border, but I don’t think both regimes are ready to move closer. … Jordan was not always clear in its policy toward Syria, and the latter feels betrayed by us.”

Oraib Rantawi, head of the Jerusalem Center for Political Studies, agreed with Kamhawi, noting that conditions may not be ideal for the normalization of ties between Jordan and Syria. He told Al-Monitor that it is in Jordan’s economic interest to reopen the border and that it is important for Syria to extend its control over the south.

“The two sides have maintained security contacts over the years despite mutual suspicions, and we need to talk about repatriation of Syrian refugees as well as trade,” Rantawi said. “But I don’t think we will soon witness a thaw in relations.”

Part of Jordan’s reluctance to restore normal ties with Syria concerns the effect of such a move on relations with its Arab and Western allies. The biggest concern, however, is at home. Many Jordanians supported the Syrian uprising while others stood with the regime against what they considered a conspiracy to divide and weaken the country.

The biggest hurdle for Amman, however, will be selling the public on any improvement in ties with a regime accused of killing hundreds of thousands of its own people. In the view of many, the opening of the border and facilitating trade is much different from cozying up to what they view as a criminal regime.