Jordan hopes that the reopening of its border crossing with Iraq is a step toward economic recovery, a goal also leading it to maintain a more moderate approach toward the Syrian government. 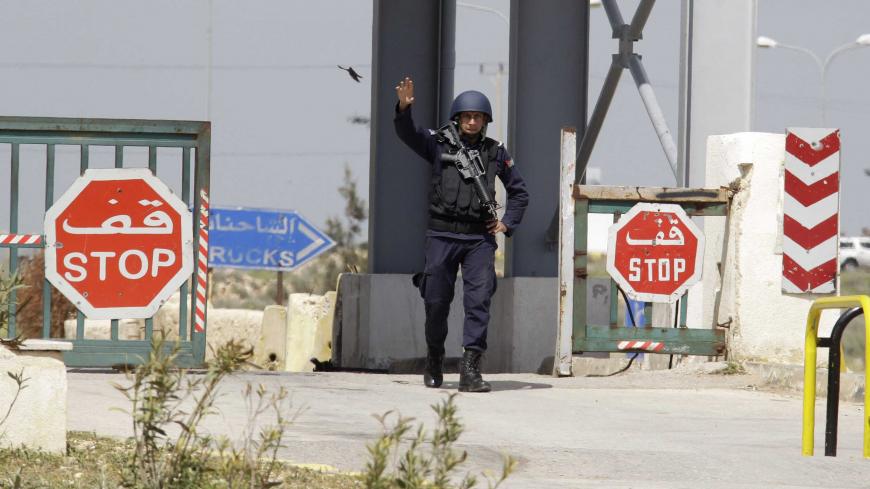 A member of the Jordanian security services gestures at the Jaber/Nasib border crossing between Syria and Jordan, April 2, 2015. - KHALIL MAZRAAWI/AFP/Getty Images

Jordan is trying to close the chapter on almost 10 years of economic sluggishness that began with the 2007/08 global financial crisis and was exacerbated by the political turbulence of the so-called Arab Spring that erupted in 2011 and whose reverberations continue to be felt across the Middle East. In this regard, Amman and Baghdad celebrated the reopening of the only land crossing between their two countries on Aug. 30, two years after it was closed due to the Islamic State’s (IS) gaining control of most of Anbar province on the Iraqi side. IS fighters had attacked the border crossing a number of times over the past two years.

For decades, Iraq was one of Jordan's major trading partners, which benefited local industries and the land transport sector in the kingdom. Most trade passed through the Karama-Trebil border crossing, making it a vital economic artery for both countries. Following the 1990-91 Gulf War and subsequent economic blockade under UN sanctions against Iraq, the Jordanian port of Aqaba became the only gateway for Iraqi imports. Jordan’s overland transport sector experienced an unprecedented boom during the 1990s and into the 2000s, until the US-led invasion of Iraq in 2003. During the decade, Jordan became dependent on cheap Iraqi oil imports.

Bilateral trade picked up again as a semblance of political stability was restored to Iraq between 2008 and 2014. In 2013, Jordanian exports to Iraq totaled an estimated $1.25 billion. After IS seized control of most of Anbar in 2014, however, the 560-mile Amman-Baghdad highway became too dangerous for truck and civilian traffic. By mid-2015, the border crossing was closed, adding to Jordan’s economic woes.

The reopening of the crossing in late August signals the slow resumption of bilateral trade between the two countries. Perhaps more importantly, it is a sign that Jordan’s efforts to normalize relations with Baghdad, after a tumultuous period under Prime Minister Nouri al-Maliki, are bearing fruit. Jordanian officials have been wooing Prime Minister Haider al-Abadi since he took office in 2014 with visits to Baghdad, the most important being Prime Minister Hani al-Mulki's trip to the Iraqi capital in January, when a number of bilateral agreements were signed.

For Jordan, restoring normal relations with Baghdad represents a strategic objective that promises to deliver a number of benefits. In 2016, the two sides signed an agreement to build an oil pipeline from Basra, in southern Iraq, to Aqaba. With the capacity to transport 100 million barrels of oil annually, the $5-7 billion project would allow Jordan to meet its crude oil needs. Work is expected to begin this year.

Khaled al-Zubaidi, business editor for the daily Addustour, is optimistic, believing that the reopening of the Jordan-Iraq border crossing will “hasten the end of the longest period of economic recession Jordan has seen in modern times.”

Zubaidi told Al-Monitor, “Jordanians will feel the impact of this move within a year, as many sectors will begin to recover, restoring our exports to Iraq to over $1 billion annually.” He added, “We expect the resumption of oil imports from Iraq at around 15,000 barrels a day at preferential rates, and in return, Jordanian exports, especially food and agricultural produce, will rise considerably, offsetting the effect of the closure of some Gulf markets, such as Kuwait and the UAE.”

Al-Ghad political columnist Fahd al-Khitan warned, however, that traffic on the Amman-Baghdad highway will not return to normal until Iraq can fully secure the road. “As much as Jordan wanted the border crossing to be opened, both sides know that terrorist groups on the Iraqi side will try to target the highway,” Khitan told Al-Monitor. “There are private security companies protecting the highway now in addition to the Iraqi army. Ensuring the safety of travel remains a priority for the Amman and Baghdad governments.”

The closure of Jordan's borders with Iraq and Syria due to the crises there complicated Amman’s efforts to kick-start its stalling economy. With the road to Baghdad now open, the government is looking north with the hope that the crossing with Syria can also reopen in the near future. Amman closed its side of the border near Daraa after the Syrian army lost control over the Nasib crossing in 2015.

Since Jordan, Russia and the United States agreed to create a de-escalation zone in southwestern Syria in July, Amman has been altering its policy toward moderate rebel groups in southern Syria. Jordan has not commented on reports that it had asked two Western-backed rebel factions on Sept. 10 to withdraw from their positions in Daraa and Sweida and fall back to the Jordanian side of the border. Jordan has insisted that its backing of rebel groups in southern Syria is aimed at fighting IS and other terrorist groups and not the regime. It also indicated that it was willing to reopen the border after the Syrian army takes control.

During the past two weeks, top Syrian officials have made positive statements about the future of relations with Jordan. In response, Jordanian government spokesman Mohammad al-Momani told a local TV station on Aug. 25, “Our relations with the Syrian state and regime are going in the right direction.” He called his remarks a “very important message that everyone should hear.” Momani’s statements coincided with reports that the Syrian army had reclaimed a number of checkpoints along the Jordanian-Syrian border.

Khitan thinks it is still too early for Jordan and Syria to restore normal relations. “Jordan is going through the motions of exploring all possibilities, and this is a trademark of its pragmatic policy,” he said. “We never broke ties with Damascus, and we never called for regime change. We backed a political solution from the onset of the crisis, and we have to look at where our interests lie.”

Zubaidi is more optimistic about the possibility of reopening crossings with Syria. “Our transit trade with the rest of the world depends on an open border with Syria, and when that happens our economy will undergo a quick recovery.”