The kingdom faces a security crisis over conflicts involving neighboring Iraq and Syria, a jihadist enclave on its border, waves of refugees, and returning terrorist fighters from both countries. 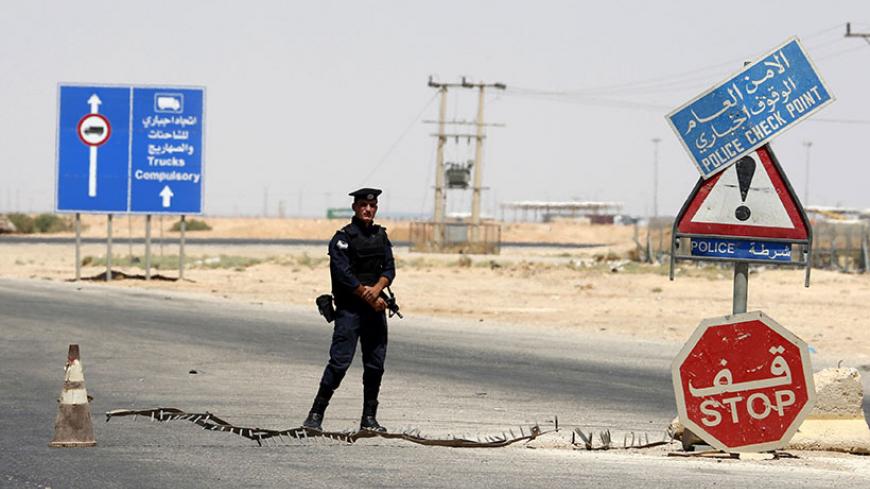 A Jordanian policeman stands guard at a checkpoint near the Karameh border crossing at the Jordanian-Iraqi border, June 25, 2014. - REUTERS/Muhammad Hamed

Jordan has reacted swiftly to reports that the border crossing point of Treibel, on the Iraqi side, had fallen into rebel hands, including possibly fighters from the Islamic State in Iraq and al-Sham (ISIS), by beefing up military presence on the eastern front and heightening the state of alert. The Jordanian armed forces confirmed June 24 that it has reinforced its units along the 180-kilometer (112-mile) border with Iraq. It said the action was taken after the Iraqi army withdrew from the border crossing, and that the army and security personnel were ready to deal with any contingency.

But a spokesman for al-Anbar governorate’s Sunni tribes told Al-Maqar website that the border point was under the control of tribal rebels who are working jointly with Iraqi border guards. He denied the existence of ISIS at Treibel, while other reports said members of the Salafist jihadist group took over a number of Iraqi towns in Anbar, including al-Rutba, 40 kilometers (25 miles) from the Jordan-Iraq border.

News of ISIS moving closer to the Jordanian borders have raised tension in Jordan prompting the government’s spokesman, Mohammad al-Momani, to announce that Jordan’s armed forces were ready to deal with any development along the kingdom’s borders, and that Jordan had deterrence power to repulse any potential attack.

The quick takeover by ISIS and Sunni rebels of at least three Iraqi governorates in the past two weeks, including the city of Mosul, Iraq’s second largest city, has created unease in Jordan for a number of reasons. ISIS has in the past threatened the regime and video clips on YouTube by Jordanian members of the organization, vowing to march on the kingdom and burning their passports, have generated concern. No one really knows how many Jordanians have joined this radical Islamist group, but there are estimates that at least 2,000 jihadists have joined Jabhat al-Nusra, which is associated with al-Qaeda, and ISIS to fight in Syria.

Another reason for concern is that Jordan maintains close ties with the Sunni tribes of Iraq, especially in Anbar. But these tribes provided sanctuary to ISIS founder, Jordanian Abu Musab Zarqawi, who was killed in Iraq in 2006. It is believed that Jordanian intelligence and an anti-terrorist squad helped the Americans locate and liquidate Zarqawi. The spread of ISIS in Anbar will raise red flags in Amman.

The possible collapse and partition of Iraq will also have grave geopolitical repercussions on Jordan. The creation of a Sunni enclave along Jordan’s eastern borders will have political, economic and social effects on the kingdom. Israel, too, is worried about such a possibility since Jordan has acted as a buffer zone between the Jewish state and Arab heartland. Israeli newspaper Yedioth Ahronoth reported on June 23 that Jordan and Israel have increased their security consultations to deal with the latest ISIS advances in Iraq.

But despite the latest successes by ISIS, the Jordanians remain confident that their country will not be an easy target and will not be next on the list. Unlike both Syria and Iraq, Jordan is a predominantly Sunni country with a Christian minority. It does not face sectarian threats, although the recent rise of Salafist jihadist groups has caused a stir.

The southern city of Maan, 180 kilometers south of Amman, has rebelled many times against the central authority. This week, it rose again against the government, which has sent troops to seek out dangerous outlaws. But Maan is also the base of Salafist jihadists and many of its sons have joined the fight in Syria. Although the majority supports Jabhat al-Nusra, two weeks ago tens of ISIS supporters marched through the city’s squares brandishing the flags of ISIS and calling Maan “the Fallujah of Jordan.” The march, after Friday prayers, was not stopped by the local police.

Local columnist Fahd al-Khitan criticized the government’s hostile attitude toward the moderate Muslim Brotherhood, preventing their political party from holding its annual conference in a public venue, while looking the other way when ISIS supporters were allowed to march through the streets of Maan. He wrote in Al-Ghad daily that young Jordanians are being lured by radical Islamist forces in light of their recent victories.

Just as Europeans now fear the return of jihadists to Europe, Jordan, too, is worried about the effect Jordanian fighters will have when they come home. Jordanians are reminded of the return of so-called Arab Afghans from Afghanistan in the late 1980s and their hostility toward the regime. Among those coming back were the likes of Zarqawi, who later became active al-Qaeda members.

A number of analysts have downplayed the effect of ISIS on Jordan. Former Chief of the Royal Court Adnan Abu Odeh told Al-Monitor that ISIS is a matter of concern, but that Jordan’s military and security organs are capable of thwarting any external threat. He said that Jordan is not Syria or Iraq, “two countries that have carried the seeds of division and sectarian violence for years because of the political systems that rules there.”

Deputy overseer of the Muslim Brotherhood in Jordan, Zaki Bani Irshaid, told Al-Monitor that the official policy against moderate Islamist movements has promoted radical religious beliefs in Jordan, and that is why “we now have ISIS at our gates.”

But head of the Foreign Relations Committee at the Lower House of parliament, Hazem Qashou, admitted that the Iraqi army’s withdrawal from the border point has created a challenge for Jordan. He told Al-Monitor that Jordan should accept the fact that there is an extension for ISIS in Jordan through Salafist jihadist groups, and that such an issue should be confronted before it is too late.

Former Minister of Culture Sabri Irbaihat warned that we know very little about ISIS, and “the fact that Jordan is now host to more than a million Syrians, over two million Iraqis and about 600,000 Egyptians should sound alarm bells.” He told Al-Monitor that the dynamics of struggle in the region are changing, and that ancient sectarian vendettas are rising to the surface.

While Syria is engulfed in an endless civil war and Iraq faces political disintegration, Jordan finds itself, once more, in an inhospitable region. Today, it faces the threat of ISIS, but the possible partition of Iraq and the rise of a radical Sunni enclave on its eastern border pose an unprecedented existential challenge to the country.