Jordan's Salafists switch allegiance to IS 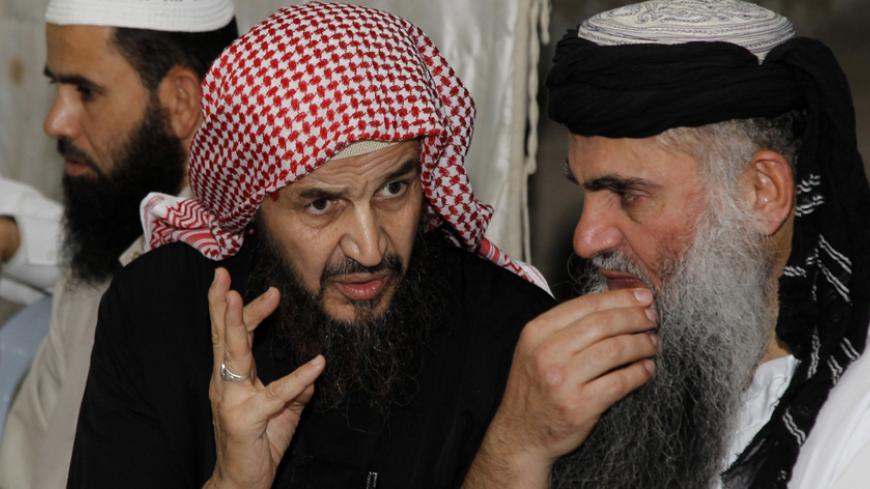 AMMAN, Jordan — The rise of the Islamic State (IS) in Iraq and Syria and the latter’s civil war have resulted in massive repercussions on the Salafi jihadist scene in Jordan, recently marked by an evolution in the group’s internal dynamics.

There are about 2,000 Salafi jihadists currently fighting in Syria, according to experts. In an interview with Al-Monitor, researcher Hassan Abu Haniya said he believes the number to be slightly lower, with 1,200 currently deployed there and about 350 killed in the conflict.

Interestingly, the Jordanian jihadist movement has known significant transformations in the last two years. While initially most Salafi jihadists were of Palestinian origin, there is now a growing number of Transjordanians who have joined the organization, such as Amer Khalayla.

“Cities such as Salt and Maan, which are tribal areas, have become centers for Salafi jihadists. The movement has also expanded in other cities such as Zarqa and Rusaifa, which is the hometown of Abu Mohammed al-Maqdisi,” Shehadeh said.

The expansion of the movement in Rusaifa, home to several hundred thousand people, has been dovetailed by the weakening of tribal traditions and linkage.

It is also home to a large number of the Bani Hassan tribe. The infamous Abu Musab al-Zarqawi belonged to this tribe; he is considered today as “the spiritual father” of IS, and headed al-Qaeda in Iraq until his killing in 2006.

Rusaifa, which is home to a large young population — in 2010, 68% of its residents were under 25 years of age — is also adjacent to Zarqa, the bastion of Salafi jihadism in Jordan. Mud blocks and narrow alleyways make up many of the city’s streets, where poverty is rampant. Zarqa’s population falls below the Jordan poverty line with an average annual income of 436 Jordanian dinars ($615), according to a study by the UNDP.

Another important change that is shaping the Salafi jihadi scene in Jordan is the shifting support of militants from Jabhat al-Nusra to IS.

“About 85% of the jihadist community now supports IS,” said journalist Tamer Samadi, an expert on Salafi groups. IS has thus been able to appeal to Jordanians who at the beginning of the war in Syria joined Jabhat al-Nusra.

“Jordanians play a lesser role in IS due to ideological differences,” Abu Sayaf said. The old guard that is comprised in Jabhat al-Nusra is closer to al-Qaeda’s more pragmatic approach than that of IS’ brutal and Manichean practices.

Another significant change in the demographics of Salafi jihadists supporters in Jordan resides in the increasing attraction it holds for members of the middle class.

“Liberal policies have translated into an increase in taxes conflating with a drop in subsidies which means that more and more members of the middle class are seeing their revenues reduced and find themselves in a situation of despair,” says Dr Mohamad Abu Rumman, from the Center for Strategic Studies at the University of Jordan. Such cases are illustrated by Dr Sami Araidi, a sharia professor who joined the salafi jihadist movement as well as Iyad Quanibi, a professor of pharmacology at Applied Sciences University in Amman, who was once banned from teaching on charges of supporting the Taliban.

Youths also represent an important source of cannon fodder for IS. Abu Rumman believes that the regional crackdown on the Arab Spring and the lack of political integration of younger citizens has helped advance IS’ agenda.

The organization has used this leverage to up the ante against the Hashemite kingdom. In February, IS released a video featuring captive pilot Muath al-Kasasbeh being burned alive in a cage. It has also repeatedly threatened the regime by uploading videos onto YouTube featuring Jordanian members of the organization, burning their passports and vowing to march on the kingdom.

The policy of the Jordanian government to the rising threat of jihadists has been essentially three-pronged. It has cleared several famous jihadists of terrorism charges, such as Abu Qatada and Maqdisi, as they represent a more moderate option from Amman’s point of view. Abu Qatada was cleared of terror charges while Maqdisi, initially imprisoned on allegations of jeopardizing state security and recruiting jihadists to fight in Afghanistan, was freed in February.

Maqdisi has criticized the burning of Kasasbeh, while Abu Qatada — who is also a vocal supporter of Jabhat al-Nusra — has publicly condemned IS’ beheading of journalists as un-Islamic.

“Jordan has adopted a strategy of divide and rule by co-opting those figures, who are willing to condemn IS significantly,” an expert said on condition of anonymity.

The Jordanian government has adopted a second approach, which focused on apprehending and prosecuting suspects, 60% of whom hail from towns such as Rusaifa and Zarqa, according to Shehadeh, who adds that the regime has shown more leniency toward Transjordanians through less stringent condemnations.

Salafi jihadists have nonetheless circumvented the surveillance of intelligence by deviating their trips, joining Iraq from Turkey or from other Arab countries. Such is the case for Omar Mahdi Zeidan and Saad Honeiti, according to Shehadeh.

A third strategy of Jordanian intelligence has been to infiltrate radical groups, an approach noticeably more successful with Jabhat al-Nusra. “IS intelligence service is very powerful thanks to the efforts of Abu Ali Anbari,” said Abu Haniya.

Just as Europeans now fear the return of jihadists to Europe, Jordan, too, is worried about the effect Jordanian fighters will have when they return.

Editor's note: This piece has been updated since its initial publication