For decades, the Muslim Brotherhood has been the Jordanian government's main political rival. But a new player has emerged to fret the Hashemite regime: homegrown Salafist jihadists. 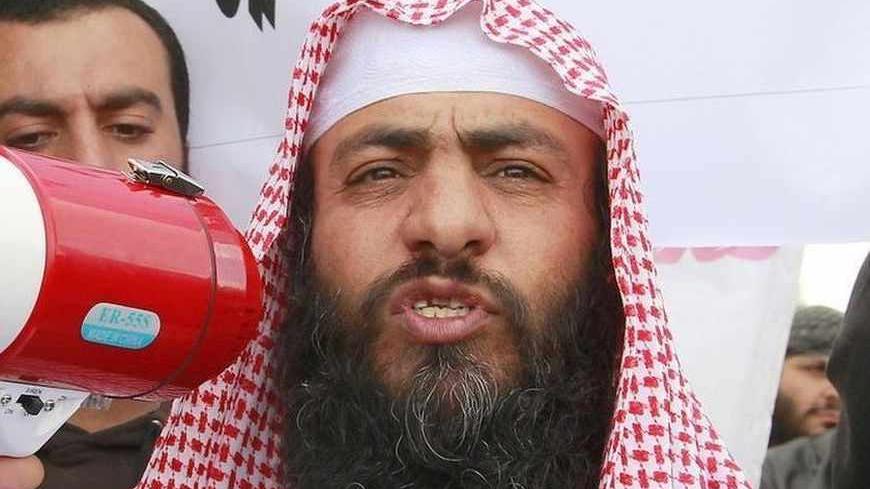 Jordanian Salafist jihadist leader Mohammad Shalabi, aka Abu Sayyaf, speaks to his supporters and reporters during a demonstration against prolonged detention of the group's leaders near the prime minister's office in Amman, April 9, 2013. - REUTERS/Muhammad Hamed

For decades the main political rival to the Jordanian regime was, and remains to some extent, the Islamist movement represented by the Muslim Brotherhood. The role of the Brotherhood as a major opponent has been amplified in the past two years after the eruption of the Arab Spring.

Defined as a moderate Islamist social organization whose aim is to reform society gradually through peaceful means, the Brotherhood has managed to coexist with the Hashemite regime in Jordan, which provided their members with a safe haven during the tumultuous years of the 1950s and ‘60s.

But now a relative newcomer to the scene is beginning to flex its muscles. It is the Salafist movement, which has evolved over the past few decades, since the mid-1980s, from a docile and reformist Sunni group calling for strict interpretation of the Quran and rejection of modern innovations that corrupt pure Islamic thought, into a more radicalized form, commonly known as Salafist jihadists, with absolute commitment to holy war, especially against the United States, Zionism and infidel regimes.

The conservative reformist group, which has traditionally accepted the authority of the state, still exists but has been overtaken by the more radical offshoot.

Jordan has battled Salafist jihadists before. The most famous follower of Osama bin Laden was Jordanian Abu Musab Zarqawi, who declared responsibility for the fatal bombings of Amman hotels in 2005. He was later hunted down and killed in Iraq by a joint Jordanian-US commando operation. His spiritual mentor, Abu Mohammad al-Maqdisi, is a Jordanian of Palestinian origin and is considered one of the most influential proponents of Salafist jihadism. He has been imprisoned by the Jordanian authorities on numerous occasions.

Today this radical movement is gaining ground, especially in Maan and Zerqa. While core followers may not exceed 5,000, there are recent signs that more young men are joining the group, especially after it had declared jihad against the Syrian regime of Bashar al-Assad. No less than 500 Jordanian jihadists are fighting alongside radical Islamist groups such as the al-Qaeda-affiliated Jabhat al-Nusra.

A recent report in Khaberni daily suggested that more young Jordanians, some from affluent families, are joining the Salafist jihadist movement. A spokesman for the movement, Mohammad Shalabi, aka Abu Sayyaf, told the newspaper that people are recruited in prisons or through personal contacts and that as a result of the so-called Arab Spring more people became interested in the goals and aspirations of the movement “which is the only one that practices jihad against the Americans and the Zionists.”

Researcher Hassan Abu Haniyeh said that we are now seeing the third generation of Salafist jihadists who are educated and belong to affluent families. Last week a Jordanian air force officer was reported to have joined Jabhat al-Nusra in Syria.

Another expert, Mohammad Abu Rumman, wrote recently that during the last two years the Salafists have made an important transition by ending their boycott of the political process and deciding to join “the democratic game” as they had done in Egypt, Tunisia and Yemen. But he adds that this does not mean that they accept democracy as a political system.

The fear is centered on the repercussions of the involvement of Jordanian jihadists in Syria on Jordan in the future. A February report in the Jordan Times said Syrian Salafist jihadists have formed divisions to carry out military acts in neighboring states such as Jordan, Lebanon and Turkey. While leaders of Jabhat al-Nusra are concerned about the agenda that foreign volunteers may bring with them, British Sky News quoted leaders of Jabhat al-Haq — one of several Salafist jihadist groups fighting in Aleppo, as stating that Islamist militants’ holy war will “stretch from North Africa to the Middle East,” encompassing Jordan, Lebanon, Iraq and Israel/Palestine.

But Abu Sayyaf was quick to announce, “There is no jihad in Jordan, there are no plans for jihad in Jordan and any talk of military acts in neighboring states is nothing but Syrian-Zionist propaganda.”

It would not be the first time that jihadists returning from foreign lands to Jordan would engage in terrorism in the name of Islam. In the 1980s, so-called Arab Afghans, including Jordanians, returning from Afghanistan, tried to destabilize the country and were involved in terrorist attacks.

That Jordan has the largest number of jihadists fighting alongside the Syrian opposition is a cause for worry. Once these young men return there are no guarantees that they would not want to carry out their jihad against the regime. Unlike the Muslim Brotherhood, the more extreme Salafist jihadists, like Maqdisi, regard the majority of Arab regimes, including Saudi Arabia, as infidels.

With sectarian confrontations between Sunnis and Shiites raging on in Syria, Iraq and Lebanon, more young zealots in Jordan will find refuge in Salafist jihadist dogma. In their view, it is this movement that best represents the answer to possible Shiite domination of the region. Last year, Jordanian Salafist scholar Abu Mohammad al-Tahawi issued a fatwa, or religious edict, calling for jihad in Syria. In his view, the current alliance between the ruling Alawite regime in Syria and the Shiites “is more threatening to the Sunnis than Israeli threats.”

As the influence of the Brotherhood recedes, especially after recent events in Egypt, the role of Salafist jihadists will increase in the region. Jordan will soon find itself in the epicenter of this emerging phenomenon.

Osama Al Sharif is a journalist and political commentator based in Amman.