Public pressure is mounting on the Jordanian government to act decisively against jihadists, fearing the kingdom could become the next target of the Islamic State. 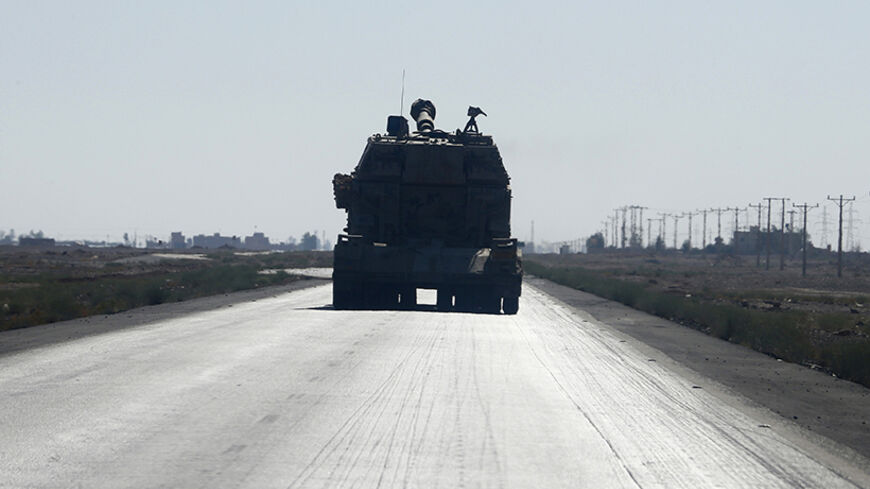 A Jordanian trailer carrying a military tank drives along a road in Ruweished, near Jordan's eastern border with Iraq, east of Amman, June 23, 2014. - REUTERS/Muhammad Hamed

For weeks now, Jordan’s punditry has been debating the same issue: Will the kingdom become the next target for the Islamic State (IS)? Government officials, newspaper columnists and members of the political establishment have responded to growing fears by citizens that the extreme Salafist jihadist organization may soon direct its attention toward Jordan, in light of recent territorial gains in Syria and Iraq and the latest incursion into the Lebanese border town of Arsal.

Adding to local concerns is the fact that Jordan’s own Salafist jihadist movement is now divided over its support of IS, and the declaration by its leader, Abu Bakr al-Baghdadi, of an Islamic caliphate in territories under his control. Last month, a group of Jordanian Salafists were caught on video, in the eastern city of Zarqa, chanting slogans in support of IS and pledging allegiance to Baghdadi. The video went viral on social media networks.

The incident came in the wake of another demonstration in support of IS on June 21 in the troubled southern town of Ma’an, a hotbed for the Salafist movement. Police did nothing to disperse participants who waved the familiar black and white IS flags.

Responding to such acts of support, the spiritual leader of the Salafist jihadist movement, Issam al-Barqawi, also known as Abu Mohammad al-Maqdisi, launched a vehement attack against IS, accusing it of killing Muslims and criticizing its declaration of an Islamist caliphate. Maqdisi was released from jail on June 16, a few days before he made his statements, raising questions about a possible deal between him and the authorities. He later denied that he had come under pressure to attack IS.

His criticisms were attacked by a group of Salafist jihadists who reiterated their loyalty to Baghdadi and IS. In a statement on July 22, they said they represent the majority of the followers of the movement in Jordan, including Abu Mohammad al-Tahawi, one of their leaders.

In contrast to Maqdisi’s position, Mohammad al-Shalabi, better known as Abu Sayyaf, told Al-Monitor that he supports any jihadist movement, including IS. He said efforts are being made to end the rift between IS and the al-Qaeda-linked Jabhat al-Nusra, which is fighting the Bashar al-Assad regime in Syria.

Abu Sayyaf denied reports that IS is already present in Jordan, adding that Jordan’s Salafist jihadists now number over 8,000 with many of them joining “jihad” in Syria. “As to clerics speaking on behalf of moderate Salafists, all they are concerned with is to defend the regime and its security arm,” he said.

But political analyst and former Minister Taher al-Adwan wrote on a local website on Aug. 10 that the IS threat is real, and that the incursion in Arsal and Iraqi Kurdistan proves that the movement is unpredictable. He wrote: “We should always remember that the Islamic State is present to our east [in Iraq’s Anbar province] and is growing in Syria’s east and south.” He rejected statements made by Israeli Prime Minister Benyamin Netanyahu that Israel would come to the aid of Jordan if it came under IS threat.

Another political commentator, Uraib al-Rintawi, agrees with Adwan. He told Al-Monitor that IS has “ideological supporters” in Jordan, and that the movement is now close to the kingdom’s northern borders with Syria, where more than 80% of Jordanians live. But he added that Jordan is different from Iraq, Syria and Lebanon because it has a professional army, a homogenous population and strong state institutions. He called for regional efforts to confront the movement's rising danger.

Mohammad Abu Rumman, who is an expert on Salafist jihadist movements in the region, told Al-Monitor that Jordan can do little to confront the Islamic State's growing influence. “It is completely incapable of dealing with the ideological onslaught of the movement, especially as most Salafist jihadists in Jordan support the ideas of the Islamic State.” He estimated the number of Jordanians fighting with IS at 3,000, but he said that in spite of the movement’s recent gains, it is doubtful that it will succeed in building a real state anywhere in the region.

For his part, Minister of Political Affairs Khaled al-Kalaldeh told Al-Monitor that IS is a security and not a political challenge for the government. He added that what happened in Zarqa and Ma’an does not constitute a change in the organizational level of local Salafist jihadist movements, and that the government is watching closely any new developments. “Historically, Jordan has been fighting all sorts of extremism and will work with other nations to confront extremism,” he said.

On the other hand, local observers have criticized the silence of the Muslim Brotherhood movement over IS. Coming under pressure, the Brotherhood's leadership took several weeks to issue a statement denouncing IS “atrocities” and accusing it of “distorting the image of Islam.”

Still, a growing number of Jordanians believe the government should take direct and decisive action against Salafist jihadists in the country. Abu Rumman said the release of Maqdisi may point to a government decision to “divide” the movement for now, but it is unlikely that such a strategy will work in the long run. Adwan agreed and said the government should focus on strengthening the domestic front against possible IS incursion.

Public pressure is mounting on the government to take action against local Salafist jihadists to undercut any presence or foothold for IS. But the authorities are hesitant to wage open war against the jihadists at this stage, opting for a wait-and-see approach for now.