A raid in Irbid on a cell affiliated with the Islamic State has Jordanians on edge. 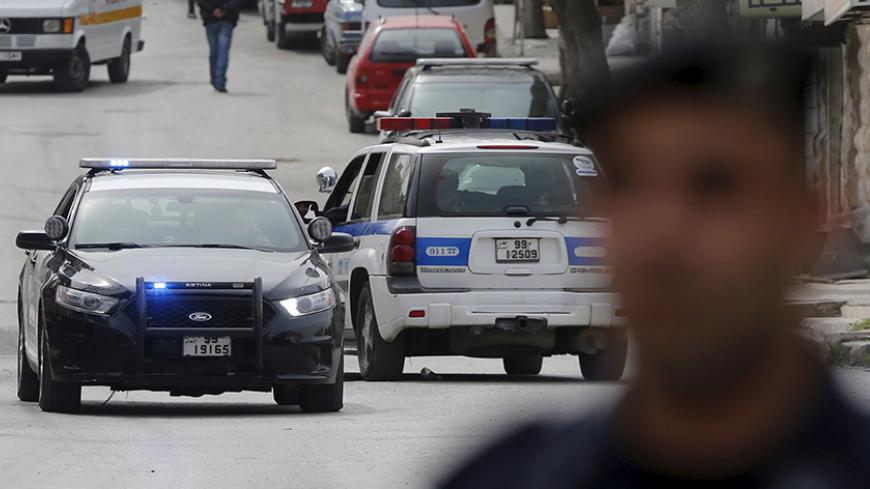 Officers of the Jordanian public security department stand guard in the northern city of Irbid, Jordan, where a manhunt conducted by Jordanian security forces resulted in the killing of several Islamist militants, March 2, 2016. - REUTERS/Muhammad Hamed

Jordanians are still reeling from the shock of a dramatic security operation undertaken March 2 in the northern city of Irbid. The predawn, hourslong raid on a cell linked to the Islamic State (IS) resulted in special forces killing seven extremists wearing explosive belts. The government's action followed the arrest of 13 suspects earlier in the day. One Jordanian security officer was killed and five others were injured in the operation.

This was the first confrontation in the kingdom with an armed group associated with IS since Jordan joined the international coalition fighting the Salafist jihadist organization in September 2014. In a March 2 statement, the General Intelligence Department said that the seven men killed in Irbid were planning to carry out attacks on military and civil targets in the kingdom.

The government has released very little information on the incident, leaving many questions unanswered. On March 3, government spokesman Mohammad al-Momani told the official Jordan Radio and Television Corporation, “Initial information indicates that all the slain cell members were Jordanian nationals.” Those arrested were being interrogated and will be tried before the State Security Court, official sources said.

The incident has shifted the public's attention to the threat that IS and other such extremist groups pose on the domestic front. Since IS emerged in 2013 in Iraq and Syria, two countries with long borders with Jordan, fears have focused on the possibility of militants crossing into the kingdom to carry out attacks.

According to political commentator Fahd al-Khitan, at least one of the dead militants had recently returned from Syria. In his March 5 column for the daily Al-Ghad, Khitan pondered whether the Irbid operation indicates that IS has established a Jordanian branch or whether the cell members were unaffiliated people sympathetic to the group’s ideology.

According to experts on Islamist movements, local jihadist leaders view Jordan as a route into Syria, not a final destination for fighters and operatives. Commentator Hussein al-Rawashdeh told Al-Monitor that given the details involving the Irbid raid, “We are facing a dangerous development that goes beyond dealing with sleeper cells. We don’t know if this cell was independent from the group in Raqqa [IS’ proclaimed capital in Syria] or if IS has infiltrated our society and has organized sympathizers to carry out orders.”

According to Rawashdeh, there are some 7,000 Salafist jihadis in Jordan, of which 2,000 are sympathetic to IS and at least 1,300 are fighting with Jabhat al-Nusra or IS. He added, “The dogma is more dangerous than the actual [IS] organization, and that is why I ask again: What have we done to confront this menace?” In conclusion, Rawashdeh said that there is a need to form a “national coalition” to defeat IS' ideology and prevent it from spreading.

An investigative report published March 2 by the Jordanian website 7iber.com found that jihadis backing IS have been active for years in the Palestinian refugee camp in Irbid. According to the report, one of IS' staunchest supporters, Abu Mohammed al-Tahawi, an Irbid resident, is in administrative custody. He had been arrested in 2015 after pledging allegiance to IS' leader, Abu Bakr al-Baghdadi. In October 2014, one of Tahawi's lieutenants, Omar Mahdi Zaidan, crossed the border from Irbid into Syria, where he is now a cleric, in Raqqa, the report said.

The thought of IS sleeper cells is troubling to Jordanians. Over the past five years, authorities have stepped up border security as hundreds of thousands of Syrian refugees crossed into Jordan. Recently, Amman has been preventing an estimated 27,000 refugees from northern Syria from entering the kingdom on security grounds. Today, there are about 1.5 million Syrians in Jordan, 600,000, of whom are registered as refugees, according to the United Nations High Commissioner for Refugees.

Amid the local debate on the danger of the Salafist jihadis' dogma, Mohammad Abu Rumman, an expert on Islamist organizations, told Al-Monitor that he had previously warned of the growing influence of pro-IS jihadis, especially in Irbid and the refugee camps close to it.

“Divisions among leaders of Salafist jihadist groups in Jordan mean nothing,” said Abu Rumman. “Those who are against IS, like Abu Mohammad al-Maqdisi and Abu Qatada, have less influence today than Tahawi and Zaidan. The latter was able to recruit young Jordanians into the militant group, and what is dangerous is that many of these recruits are university graduates while others belong to the middle class.” Abu Rumman added, “In the past, recruits traveled to IS-controlled areas [in Syria], but what we are seeing now [following the Irbid incident] is that they are becoming active locally.”

Indeed, Salafist jihadist groups have been active in Jordan for years, and some experts believe they were tolerated by the government. Rawashdeh said that previous governments “looked the other way and even supported these groups to stem the influence of the Muslim Brotherhood in the political arena.” He believes that as a result, IS' ideology has spread within society to point that it is too late to confront it.

There is now consensus among commentators and government officials that in addition to dealing with Salafist jihadis with an iron fist, a new strategy is needed to combat their dogma in schools, universities, mosques and other parts of society. Commenting on the need for new strategies, columnist Musa Keilani wrote March 5 in the Jordan Times that the government has neglected the “cyber warfare that is used to recruit through what is called online indoctrination, [whereby] more Jordanians are converted into jihadist Salafists, capitalizing on their unemployment, frustration and despair.” Talking to editors of local newspapers on March 3, King Abdullah highlighted the importance of the media's help in countering radical ideology “to safeguard present and future generations.”

Following the Irbid operation, one expert on Islamist groups, Marwan Shihadah, believes that IS has set its sights on destabilizing Jordan. “They have changed their strategy and made use of the fact that the government was focusing on weakening the Muslim Brotherhood,” Shihadah told Al-Monitor. “They also benefitted from the fact that young Jordanians are battling unemployment and bad economic conditions, which allowed them to infiltrate our society.”

The Irbid raid has raised anxiety over the danger that Salafist jihadis present to national security, but the success of the security forces in exposing the cell and preventing it from carrying out terrorist activities has also reassured the public that when it comes to safeguarding Jordan, the intelligence apparatus is vigilant and capable of acting. The big question now is what strategy the government will adopt to confront the Salafist jihadist dogma in the long run. 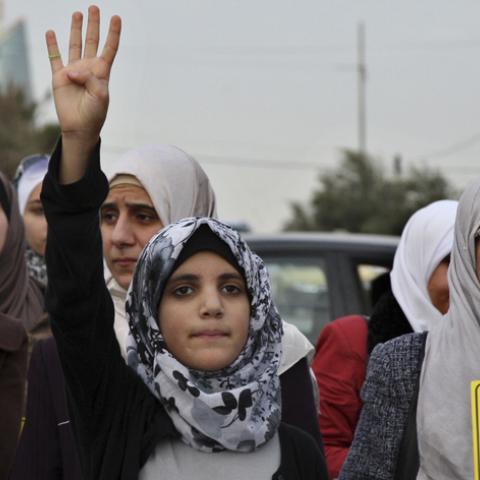