IS turns its attention to Jordan

Some analysts say the Islamic State attack in Jordan’s Rukban border area was designed to increase IS’ popularity within certain segments of Jordanian society. 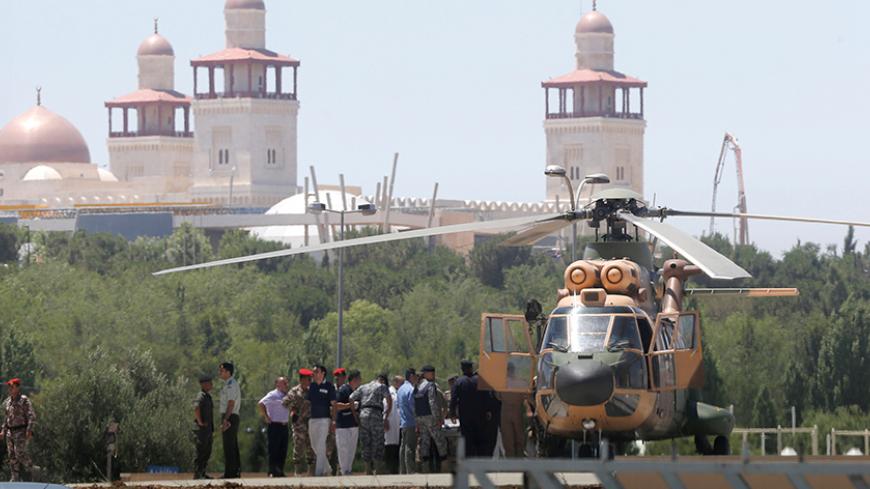 A security member, who was injured during an attack at the Rukban refugee camp in eastern Jordan near the borders of Iraq, Syria and Jordan, is transported from a military helicopter to al-Hussein Medical Center in Amman, Jordan, June 21, 2016. - REUTERS

AMMAN, Jordan — Prior to the month of Ramadan, Islamic State (IS) spokesman Abu Muhammad al-Adnani called for increased attacks worldwide in an audiotape released on May 21. “Ramadan, the month of conquest and jihad. Get prepared, be ready … to make it a month of calamity everywhere for nonbelievers,” he announced. IS executed this threat by launching attacks across the region including a June 21 suicide truck-bomb attack on Jordanian forces, killing seven and injuring 13 in the Rukban border area.

On June 26, IS claimed responsibility for the strike and posted a video of the bombing on Amaq, a news agency affiliated with the terrorist group. By publicly claiming this attack, IS intensified its ongoing struggle against the Hashemite kingdom. Why did IS strike Jordan?

Hassan Hassan, co-author of the book “ISIS: Inside the Army of terror,” told Al-Monitor that IS considers the Hashemite kingdom “worse than the Americans because this is an Arab and Muslim country that has declared war against it.”

Oraib Rantawi, the director of the Amman-based Quds Center for Political Studies, explained that the Rukban bombing should be understood within the larger regional context. “IS started losing territory in Iraq and Syria and was being cornered in many fronts,” Rantawi explained. This pushed IS “to commit such attacks to send messages to all parties concerned that [they] are still strong and have the ability to harm [their] enemies," he added.

Hassan believes that the strike was designed to increase IS’ popularity within certain segments of Jordanian society, especially citizens who view the Hashemite leadership as illegitimate and apostate. Approximately 2,000 Jordanians have left the country to fight with IS, and Islamist expert Mohammed Abu Rumman estimates that there are more than 10,000 jihadi Salafists across the Hashemite kingdom.

IS is trying to “attract Jordanian jihadi sympathizers, and there are plenty of them,” Hassan said, adding, “Both IS and al-Qaeda think that Jordan has a massive underground recruitment opportunity that [they] can tap into.”

The site chosen for the attack appeared deliberate. On the video posted by Amaq, it noted that the operation struck the “American-Jordanian” Rukban military base. Near this site, American, British and Jordanian special forces have reportedly established an outpost to support Syrian rebel groups. By striking at this sensitive spot, IS appears to be likewise sending a message to Washington about the dangers of actively supporting Syrian opposition militants.

Al-Ghad columnist Fahed Khitan told Al-Monitor that although this is the first time IS claimed responsibility for a successful border attack against Jordan, it has repeatedly attempted to strike the Hashemite kingdom in the past. Khitan said the Rukban bombing might have been revenge against Amman for killing seven jihadists in a March raid by Jordanian security forces in the northern city of Irbid. The Hashemite kingdom publicly blamed IS for the firefight, which left one Jordanian security officer dead.

Analysts believe that IS’ ongoing conflict with rebel groups partially motivated the June 21 truck bomb. Just as IS has launched a series of cross-border attacks into Turkey designed to pressure Ankara regarding its policy toward the Syrian war, the recent Rukban killing may have a similar goal. Hassan noted that IS would try to increase its attacks in the border area. This could lead to Jordan closing its border and sabotaging the access Syrian rebels desperately require to continue fighting.

Internal developments within IS could have played a role in this attack. In May, three groups that were loyal to IS merged together in Daraa, southern Syria. The National reported that the unified group, called the Khalid bin Walid Army, has been more effectively able to repel attacks by rebel groups in this area. Hassan explained that the new union has led to improved coordination among the group and allowed the leadership to better take advantage of IS members in its operations.

Hassan expects additional attacks against Amman given the new changes within IS in this strategic area close to Jordan’s border.

The same day of the June 21 strike, King Abdullah vowed that the country would respond with an “iron fist” against those who threaten Amman’s security. The London-based Al-Hayat newspaper reported that Jordan bombed IS-affiliated targets in southern Syria on June 25, which was Amman’s first military response after the Rukban bombing. Al-Hayat did not reveal if there were injuries or deaths from the strikes, and the Jordanian military never officially disclosed the attacks. However, Khitan, who is considered close to senior Jordanian decision-makers, confirmed to Al-Monitor the military operation.

IS’ Rukban attack was designed to send a strong message to the Jordanian leadership and security forces. However, immediately after the truck bombing, Amman declared the Rukban area a closed military zone while preventing food and medical supplies for the more than 60,000 refugees. More than half of the trapped refugees are minors, and disease and malnutrition are spreading rapidly in these harsh conditions. Once again, the Syrian refugees — who are overwhelmingly Muslim — are paying a heavy price for IS’ military strikes.