Jordan’s 1994 peace treaty with Israel along with its pro-US orientation seems to have put the country on a collision course with Iran. 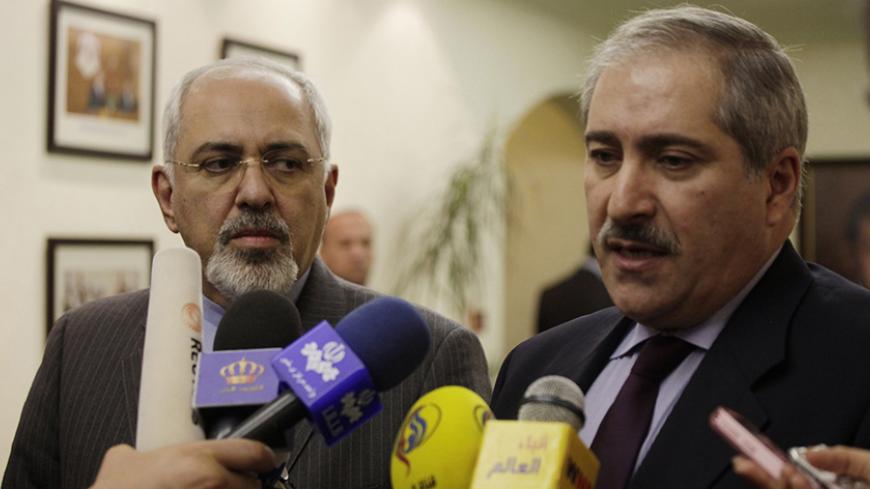 After Friday prayers April 14, Jordanians gathered in the northern city of Mafraq burning Iranian flags and pictures of Iran's Supreme Leader Ayatollah Ali Khamenei while demanding the expulsion of Iran’s ambassador from the Hashemite Kingdom.

The demonstrations came in response to a war of words between senior Jordanian and Iranian officials. In a wide-ranging interview with The Washington Post on April 6, King Abdullah II addressed the challenge of growing Israeli settlement construction while trying to fight terrorism. He warned, “These issues give ammunition to the Iranians, to [Islamic State leader Abu Bakr] al-Baghdadi and ISIS [Islamic State].”

The remarks of Jordan's monarch stunned many in Tehran because he seemed to equate the Iranian government with IS. The response from Iran was swift, with Foreign Ministry spokesman Bahram Ghassemi blasting Abdullah’s comments as “silly and careless,” reflecting his “ignorance and superficial” view. Jordan’s Foreign Ministry promptly summoned the Iranian ambassador in Amman, Mojtaba Ferdosipour, rebuking the Iranian envoy for his country’s verbal assault. Ghassemi’s words stung as Jordanians expect that those who oppose the country’s policies will criticize the government, not taunt the king himself, which is considered a red line in the Hashemite Kingdom.

Beyond the rhetorical insults, the latest spat between Amman and Tehran reflects a genuine policy divide that is unlikely to disappear in the short term. Abdullah warned in the Post interview about Iranian Revolutionary Guard Corps forces operating only 70 kilometers (43 miles) from Jordan's borders, adding that non-state actors approaching Jordan will not be “tolerated.”

“Jordan is geographically far away from Iran,” Nabil Sharif, the former Jordanian minister of media affairs and former ambassador to Morocco, told Al-Monitor. “Iranian forces have no business to be on our borders at all. The only conclusion that I can reach is that they are there to threaten and pressure Jordan.”

At the same time, Payam Mohseni, the director of the Iran Project at the Harvard Kennedy School of Government, told Al-Monitor, “Iran views the Syrian civil war as a conflict mainly aimed toward undermining the Islamic Republic. Given Syria’s historically close ties to Iran and its important geostrategic position on the Mediterranean — including its proximity to Hezbollah — the Iranians will never give up Syria willingly. Iran views outside incursions into Syria — including from Jordan’s borders — as unacceptable and will work to secure the border area.”

Iranian or Hezbollah forces' approaching Jordanian sovereign territory could be especially destabilizing for Amman. Professor Musa Shteiwi, the director of the University of Jordan’s Center for Strategic Studies, told Al-Monitor that Iran and Hezbollah have previously tried to carry out attacks inside Jordan.

In 2015, Jordan’s military court sentenced eight Hezbollah suspects — seven Jordanians of Palestinian origin and one Syrian — for conspiring to launch a terrorist attack against American and Israeli targets inside Jordan using machine guns and homemade explosives, while recruiting members to join the Lebanese militant organization. Jordanian security forces also foiled a terror attack in 2015 by the Iranian-sponsored Bayt al-Maqdis group with 45 kilograms (99 pounds) of powerful explosives found in the suspect’s possession.

“There is this innate desire among the hard-liners in Tehran to flex muscle to show that they are a regional actor to be reckoned with,” Alex Vatanka, an Iranian senior fellow at the Middle East Institute, told Al-Monitor. “When you say that you are close to a border, that means you are a real player in Syria or Iraq. We are part of the conversation. You can’t isolate us.”

Amman’s renewed harsh rhetoric against Iran is also based on Jordan's two strategic alliances: Saudi Arabia and the United States, which have each adopted especially tough policies toward Tehran. Oraib Rantawi, the general director of the Amman-based Al-Quds Center for Strategic Studies, told Al-Monitor that Jordan does not have the “luxury” to distance itself from its wealthy patrons. “Jordan suffers from a severe economic crisis and is in very bad need of American and Saudi support for our economy and military,” he said.

In 2016, the United States provided Jordan with over $1.6 billion in assistance. “There are no free lunches in international relations,” Rantawi added.

The recent Jordanian-Iranian diplomatic feud is not a one-time occurrence. In January 2016, the Jordanian Foreign Ministry summoned Ferdosipour to condemn the attack on the Saudi Embassy in Tehran; Saudi Arabia is a long-time ally of Jordan. In 2004, Abdullah warned about Iran’s “Shia crescent” dominating the region.

The tensions with Iran are likely further exacerbated by the numerous reports in the Jordanian media, including by Al-Monitor’s Osama Al Sharif, that Amman is considering joining a British-American military operation in southern Syria to fight against IS fighters. “It is not only about defeating IS. The question now is who will fill the vacuum of IS in these areas?” Rantawi noted. “Iran and Hezbollah are looking to support [Bashar al-Assad’s] Syrian army to fill the vacuum. For Jordan and its allies, this is not even an option. They want their own allies and even their own troops to fill the vacuum of IS in these parts of Syria.”

Abdullah expressed concern about Iranian intentions across the region in the Post interview, saying, “There is an attempt to forge a geographic link between Iran, Iraq, Syria and Hezbollah/Lebanon. I raised this with President [Vladimir] Putin, who was fully aware of … Iran’s strategic intent to have power there.”

The Jordanian leadership echoes the March Arab League Summit’s communique, which implicitly rebuked Tehran by rejecting external interference in Arab affairs. Shteiwi said, “Iran tries to promote its own branch of Islamic radicalism and its expansionist approach is an attempt to dominate the region.”

Vatanka said Jordan’s 1994 peace treaty with Israel along with its pro-US orientation naturally puts the country on a collision course with the Iranians. But many Jordanians suggest that Iran’s consistent support for non-state Arab militia organizations such as Hezbollah in order to further propagate Iran’s Islamist ideology across the region contradicts Tehran’s own rhetoric against meddling in other countries’ internal affairs.

“You cannot have it both ways. You cannot be a revolutionary state that wants to break down the order including the order that keeps kings like Abdullah in place, and yet at the same time say to Abdullah, 'Why do you fear me. Why do you speak against me?'” Vatanka said.