Why Jordan's king is criticizing his country's closest allies

King Abdullah has made harsh statements against Obama’s war on IS, Saudi Arabia’s foreign policy and Russia’s policy in Syria, yet due to Amman's precarious geostrategic position he doesn't always fully stand by his own comments. 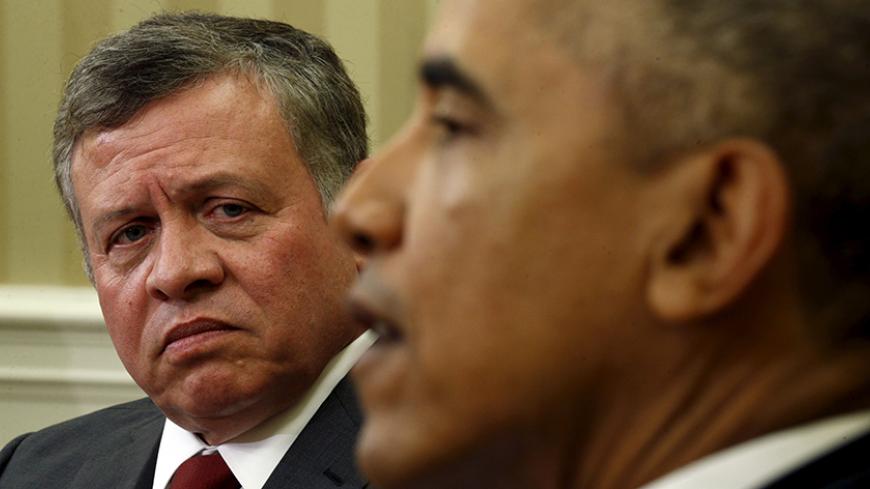 US President Barack Obama meets with King Abdullah of Jordan in the Oval Office of the White House, Washington, Feb. 24, 2016. - REUTERS/Kevin Lamarque

AMMAN, Jordan — During a 2014 NATO summit in Wales, US President Barack Obama asked to speak privately with Jordan’s King Abdullah II. As reported in the April issue of The Atlantic, Obama was unhappy about the Hashemite monarch having criticized his Middle East policies to members of Congress, so he asked Abdullah to speak with him directly regarding any future reservations he might have, rather than voicing them to US lawmakers.

Sixteen months later, in January 2016, Abdullah bashed Obama’s war against the Islamic State (IS) while emphasizing Jordan’s challenging geostrategic position in a briefing with members of Congress, according to a leak reported in The Guardian March 25. In what emerged as an embarrassing revelation, Jordan’s king rebuked his most important patron, acknowledged sending special forces to faraway lands despite potentially significant domestic opposition and disclosed Amman’s robust security ties with Israel in the Syrian war.

When asked about Jordan’s participation in the Saudi-led coalition against terrorism, Abdullah told the congressional members that his country had only joined because it was a “nonbinding” effort, adding that the United States should be “realistic” about the alliance accomplishing anything. Saudi Arabian Deputy Crown Prince and Defense Minister Mohammed bin Salman had announced the formation of the coalition with great fanfare on Dec. 15, stressing the importance of the coalition and asserting that the alliance would coordinate the fight against extremism in Afghanistan, Iraq, Libya and Egypt.

Riyadh is one of Jordan’s main backers in the Gulf Corporation Council, four members of which, including Saudi Arabia, extended $5 billion in development assistance to Jordan for the period 2011 to 2016. Given Jordan’s significant economic challenges, including public debt at 90% of gross domestic product and 28% youth unemployment, Saudi Arabia’s monetary support is critical. Despite Saudi Arabia’s strategic importance to Amman, Abdullah raised eyebrows by ridiculing Riyadh’s military initiative in front of his American hosts.

Oraib Rantawi, director of the Amman-based Quds Center for Political Studies, told Al-Monitor that Riyadh is “very sensitive” to criticism in the Hashemite kingdom. It is no coincidence that in April 2015, Jordanian security forces arrested journalist Jamal Ayyoub, who was eventually held for three months, for penning an article condemning not his own country, but the Saudi war in Yemen.

Noting Abdullah’s divergent views on Saudi Arabia when speaking to members of Congress versus with his Gulf allies, Sean Yom, professor of political science at Temple University and a Jordanian foreign policy expert, told Al-Monitor that it is part of a delicate balancing act given the opposing interests of Amman’s patrons. Yom said, “The Jordanian leadership has to address its immediate interests in a way that makes the other actor feel satisfied, but that does not lead to a very consistent overall foreign policy.”

While rebuking Jordan’s strongest traditional allies to the congressional representatives, Abdullah acknowledged his country’s close security ties with Israel, despite overwhelming domestic opposition toward the Jewish state. The Hashemite monarch noted that his country’s air force flies with Israeli military jets along the Syrian border, adding that he had personally met with the head of Mossad in Amman. In line with popular views, the Jordanian parliament accused the “Israeli enemy” of state terrorism in October 2015, and thousands of Jordanians routinely protest in the streets against Israel’s policies with regard to the Al-Aqsa Mosque compound. Although the Jordanian government consistently condemns or protests Israeli actions and its policies toward the Palestinians, Abdullah revealed Amman’s successful security cooperation with Israel at the highest levels, not the intimacy one expects from a country that is labeled the “enemy” in statements from parliament.

The Jordanian leader’s statements to congressional representatives in January were consistent with what he told The Atlantic in 2013, when he described his relationship with Israeli Prime Minister Benjamin Netanyahu as “very strong” and asserted, “Our discussions have really improved.”

In addition to disclosing Amman’s robust security ties with Israel, the Jordanian leader revealed to congressional representatives another potentially unpopular decision — that Jordanian special forces would be deployed to Libya in the fight against IS, embedded with British troops. Abdullah also said that Jordanian forces were ready to go “over the border” and attack al-Shabab in Somalia.

Yom explained the unpopularity of such actions among average Jordanians, saying, “The public does not like to hear that in a cash-strapped country with a refugee crisis, the government is spending dozens upon dozens if not hundreds of millions of dinars sending special forces abroad.”

Adnan Abu Odeh, former Royal Court chief and ambassador to the United Nations, expressed his frustration with the Jordanian leader’s secrecy about such key military decisions. He told Al-Monitor, “We pay taxes to this government, and our king says we will fight the Shabab, but we don’t know, neither the parliament nor the government nor anybody,” he said. Abu Odeh added that sending special forces abroad to fight terrorism, even to Africa, is dangerous, as it makes Jordan a greater target for extremists across the region.

The Jordanian king traveled to Moscow last November and August to meet with President Vladimir Putin, and a few months later harshly critiqued Russia’s policy in Syria when he spoke to members of Congress. Abdullah said that the Russians were warned, “One bullet across the agreed upon border in the south, [and] all gloves are off.” As reported on March 25 in the Middle East Eye, he added that Jordan was focused on “keeping the Russians in their place.”

Rantawi explained that Abdullah’s criticisms of Saudi Arabia, the United States and Russia stemmed from the Hashemite kingdom’s challenging geostrategic position. “We disagree with many in the region,” Rantawi said. “It is better for Jordan to not attach itself to any camp and to keep maneuvering because you cannot rely on a certain axis.”

While Abdullah’s criticisms, reported in the British newspaper The Guardian, could have an impact on Amman’s foreign policy, Jordan’s top four newspapers — Al-Rai, Al-Dustur, Al-Ghad and the Jordan Times — have not covered Abdullah’s statements. The week they were revealed, however, each dutifully ran articles covering Prince Hamzah’s birthday. In a country with high levels of self-censorship and government pressure on the media, it is perhaps not surprising that Jordanian newspapers have steered clear of Abdullah's criticism's to limit public discussion of topics uncomfortable for the Royal Palace. Both Royal Court Media Director Khalid Dalal and Minister of State for Media Affairs Mohammad Momani declined repeated interview requests for this article.

After the king’s January conversations with congressional officials, Royal Court Political Director Manar Dabbas noted that the discussions in Washington were off the record despite Abdullah’s harsh attacks. Two years earlier, the US leader also confronted Abdullah after similar conversations with members of Congress in closed sessions criticizing Obama. In the age of leaks and more aggressive media, one wonders whether Jordan’s monarch needs to be more careful with his blunt criticism of country’s leaders as fewer conversations can be completely shielded from the press in 2016.