State of the Union highlights Jordan’s rift with Obama

The US president directly contradicts King Abdullah’s talking point that the campaign against IS is a “third world war.” 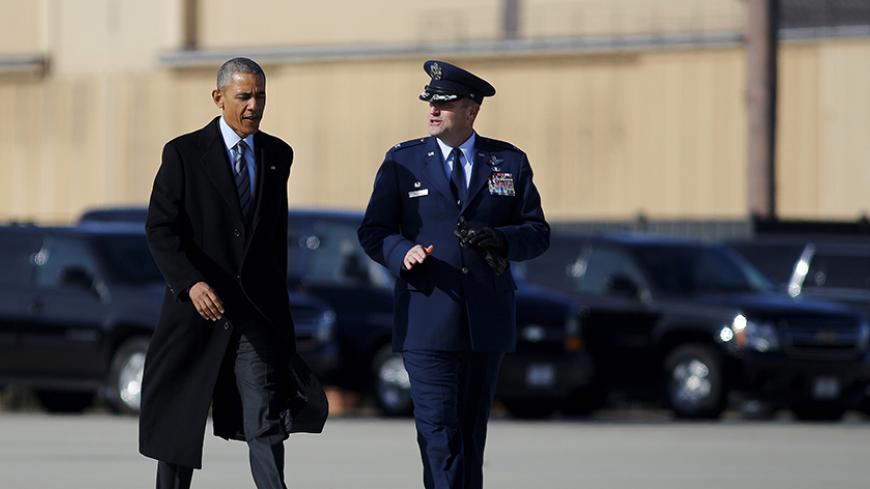 President Barack Obama walks to board Air Force One for Nebraska and Louisiana, after a short meeting with Jordan's King Abdullah at Andrews Air Force Base in Maryland, Jan. 13, 2016. - REUTERS/Carlos Barria

Despite the harsh divide among Republican presidential candidates on foreign policy, the importance of Jordan has been a unifying theme. Donald Trump praised King Abdullah on Twitter and Ohio Gov. John Kasich wished in a presidential debate that Jordan’s king “would reign for a thousand years.” In stark contrast to the Republicans, President Barack Obama downplayed or did not mention Amman’s most critical national priorities — the Islamic State [IS], Palestine and the war in Syria — during his Jan. 12 State of the Union address.

Addressing members of Congress that evening, Obama emphasized, “As we focus on destroying [IS], over-the-top claims that this is World War III just play into their hands.” The American leader’s assertion that such dire warnings about IS are misguided directly contradict one of Abdullah’s main talking points when traveling overseas.

Over and over — whether at the United Nations General Assembly podium, during an interview with PBS’ Charlie Rose or even in Kosovo — the Jordanian monarch has declared that the battle against IS is “a third world war, and I believe we must respond with equal intensity.”

After IS kidnapped Jordanian pilot Lt. Muath Al-Kaseasbeh and burned him alive in a cage in February of last year, the Jordanian air force launched a series of strikes against IS targets in Syria and Iraq. Jordan claimed to have killed 7,000 fighters in the days following Kaseasbeh’s execution.

Obama’s minimizing of the IS campaign speaks to a fundamental divergence with Abdullah and has led many leading thinkers in Amman to question America’s determination and willingness to, in the president’s own words, “degrade and ultimately destroy [IS]." If the world’s strongest and most advanced military cannot defeat a far inferior and less organized group, what are Obama’s true intentions?

In addition to IS, the State of the Union illustrated a major policy rift with Amman regarding the Palestinian peace process. Obama did not once bother to mention Palestine or Israel in the speech setting up his administration’s goals for the upcoming year. Here again, Jordanian leaders take an opposite approach to this sensitive issue. House Speaker Atif Tarawneh said in October, “Jordan, under the leadership of King Abdullah II, has placed the Palestinian issue on top of its priorities.” Amman raises the urgent need to create a Palestinian state in almost every meeting abroad.

The Hashemite Kingdom’s difference with the Obama administration is not solely focused on this speech, but rather encompasses a larger policy divide. Since Secretary of State John Kerry’s peace efforts stalled in 2014, the United States has not led an ongoing effort to end the Palestinian conflict. White House Middle East coordinator Rob Malley told reporters in November that reaching a negotiated solution between the parties during Obama’s remaining term “is not in the cards.” In contrast to Amman’s wishes, the Obama administration no longer prioritizes tackling the Israeli-Palestinian conflict in a region filled with violence.

Even before the speech, it was difficult to ignore the missing element in Abdullah’s Washington itinerary Jan. 12. After traveling thousands of miles, the king initially could not secure a meeting with Obama because of "scheduling conflicts." However, the two did meet briefly Jan. 13 at Andrews Air Force Base before both departed on separate trips. A longtime and dependable US ally despite the Middle East’s turmoil arrives in the US capital, but Obama could not carve out more than about five minutes for the king.

In addition to the battle against IS, nearly five years of fighting in Syria have dramatically impacted next-door Jordan. Jordan has absorbed over 630,000 Syrian refugees, according to the United Nations (one diplomat estimates that Syrians represent about 20% of Jordan’s population), and Abdullah has repeatedly called for decisive action to end the conflict. Yet, in Obama’s brief mentioning of the bloody crisis that has killed some 250,000 people, the US president appeared satisfied with US policy. Obama cites Syria as an example of the “smarter approach, a patient and disciplined strategy that uses every element of our national power” by partnering with local forces — despite the fact that the conflict’s violence has only been spreading.

It is no wonder that in recent months, Abdullah has met multiple times with Russian President Vladimir Putin, a US rival, during trips to Moscow to discuss developments in the Middle East. The United States provides Jordan with significant financial aid, but mere monetary assistance is no longer sufficient in tackling the region’s spiraling crises. With Putin demonstrating decisive action in his military intervention alongside Damascus while daylight grows between Abdullah and Obama over IS, Palestine and Syria, the king may question whether the United States is truly a reliable Jordanian ally during such uncertain times.