Jordan rejects land offensive against IS, for now

Observers believe that Jordan is being dragged into a land offensive against the Islamic State in Syria, using the execution of its pilot Muath al-Kaseasbeh as cover. 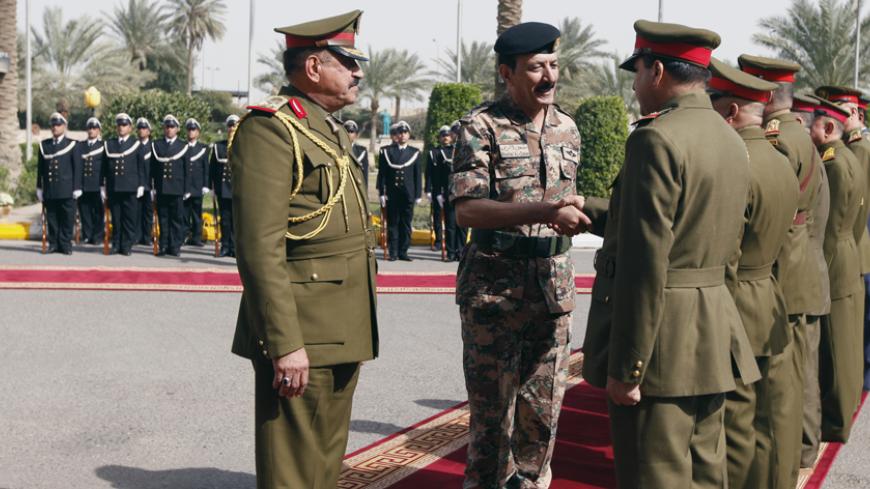 Jordan is unlikely to join a land offensive against Islamic State (IS) militants in Syria and Iraq. The kingdom had intensified its airstrikes against IS positions in the aftermath of the brutal killing of its pilot, Muath al-Kaseasbeh, reportedly on Jan. 3. The immolation of Kaseasbeh has shocked Jordanians and fostered a sense of national unity. King Abdullah has vowed to avenge the death of the pilot and promised to hit the militants hard on their home turf. So far, the Jordanian response has been limited to airstrikes, but analysts told Al-Monitor that the kingdom’s elite special forces could wage commando-style operations against selected targets as well, in coordination with the Iraqi army and Kurdish peshmerga.

In the wake of Kaseasbeh’s execution, Jordanians rallied around the armed forces, which promised “an earth-shattering response.” Support for the aerial strikes has been unequivocal. Even the Muslim Brotherhood, which had earlier criticized Jordan’s decision to join the US-led air campaign against the militants, has condemned the pilot’s killing and declared that IS has no relation to Islam. As the world expressed sympathy and solidarity with Jordan, the White House and Congress promised to increase military aid to the kingdom. Last week, the United Arab Emirates and Bahrain sent squadrons of F-16s to Jordan to join in the airstrikes, as Amman spearheaded the attacks from the Arab side of the coalition.

But a number of deputies, retired military officers and political figures expressed fear that Jordan was being dragged into an open-ended war outside its borders. A group of Jordanian personalities issued a statement on Feb. 11 voicing their rejection of “attempts to use the current wave of sympathy as a cover for military and security intervention in southern Syria in cooperation with American, French, Saudi and Israeli parties.”

The government had denied that it was preparing to engage in a land war. Sen. Mohammad al-Shawabkeh told Al-Monitor that the authorities have made their stand clear on this point. “But the issue keeps popping up, which raises questions about the motives behind this,” he said. “If a land operation is launched, then Jordan can provide logistical support.”

Talk about a Jordanian role in the land offensive resurfaced when the US co-coordinator for the international coalition against the militants, Gen. John Allen, told the official Jordanian news agency Feb. 8 that Iraqi troops will begin a ground offensive “in the weeks ahead” to take back swaths of the country seized by IS. He added, “There will be a major counteroffensive on the ground in Iraq,” and “Iraqi ground troops would be backed by coalition firepower.”

But Jordan's Senate Speaker Abdel Raouf al-Rawabdeh dismissed reports about Jordan’s future role and said Feb. 13 that the kingdom “will not engage in a land war against IS but will continue to confront the militants.”

Such statements did not end the discussion over a possible Jordanian part in a future land offensive. On Feb. 12, the chief of the Joint Staff of the Jordanian armed forces, Lt. Gen. Mashal Mohammad al-Zaben, flew to Baghdad to meet with top Iraqi officials. In a press conference with Iraqi Defense Minister Khaled al-Obeidi, Zaben said, “Jordan will do its utmost to defeat IS,” and “the Jordanian armed forces will work with the Iraqi army to defeat the militants in Iraq and Syria.”

The killing of Kaseasbeh elicited a rare statement of solidarity from Syria, which called on Amman to work with it in the fight against terrorism. But harsher words soon followed a few days later from Syrian Foreign Minister Walid Moallem and later from President Bashar al-Assad himself. Both accused Jordan of "training terrorists," especially those affiliated with Jabhat al-Nusra. Assad, in his Feb. 15 interview with the BBC, reiterated such accusations. Jordan rejected them, and Minister of Information Mohammad al-Momani said that the kingdom still believes a political solution for the Syrian crisis is possible.

But an eyewitness told Al-Monitor that she saw convoys of Jordanian tanks being transported to the north of the kingdom on Feb. 15. Analysts believe the current mobilization has nothing to do with preparations for a land offensive but is directly linked to a possible attempt by the Syrian regime to retake the southern city of Daraa, along the Jordanian border. In their view, Jordan is making a precautionary move to protect its northern borders against a possible retreat by rebels from Daraa. Jordan has closed its borders with Syria and is worried about a possible spillover of rebels and refugees if military confrontations break out between the Syrian army and the rebels in Daraa governorate.

Retired Gen. Musa Udwan told Al-Monitor that airstrikes alone will not defeat the extremists and that a wider coalition should be formed to provide support for the Syrian and Iraqi armies, which must lead the land offensive against IS militants. “But for this to happen, a massive land offensive must be undertaken to deal a final blow to the militants,” he said.

For now, the most direct threat to Jordan comes from so-called sleeper cells and IS sympathizers at home. Between 1,500 and 2,000 Jordanians are said to be fighting in Syria and Iraq with IS and Jabhat al-Nusra. On Feb. 16, a Ministry of Interior spokesperson was quoted as saying that there were between 6,000 and 7,000 Salafists in Jordan, with at least 2,000 additional sympathizers. Furthermore, a poll conducted last year by the Center for Strategic Studies at the University of Jordan showed that 10% of Jordanians see IS as a legitimate resistance organization. Fighting religious extremism at home has become a national priority as the threat from militants increases.

Political analyst Hazem Mubeidin told Al-Monitor that Jordan has no choice but to join a wider coalition in a land offensive against IS militants and that “may require Amman to coordinate with the Assad regime.” A similar call was echoed Feb. 19 by political columnist Urayb al-Rintawi in Addustour, who wrote that Jordan should consider working with the Damascus regime to combat militants close to Jordan’s borders. The debate continues but one thing is clear: Joining a land offensive, as remote a possibility as that sounds now, will polarize the kingdom and present new challenges for the regime.