Are Amman-Ankara ties in crisis?

Deep divisions remain between King Abdullah and President Erdogan, who have not met in more than three years. 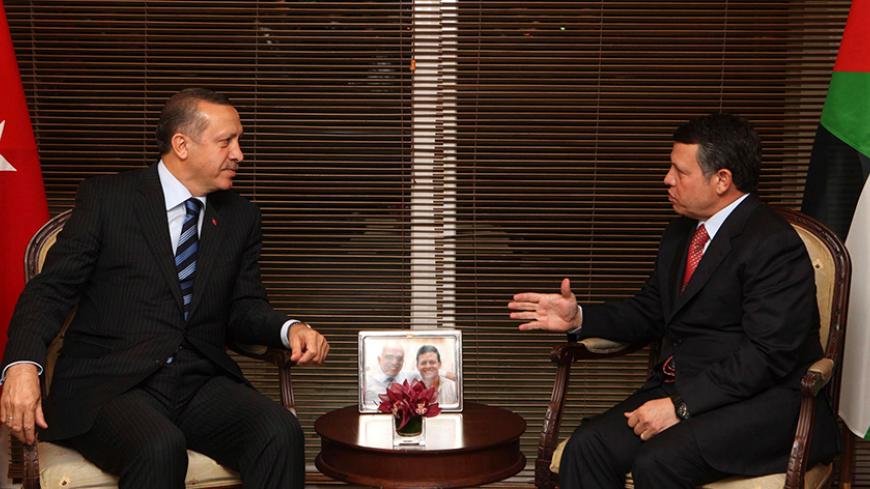 AMMAN, Jordan — With King Abdullah II spending 25% of his time abroad in 2015, the Jordanian monarch has not lacked opportunities to meet foreign leaders. Three months into 2016, Abdullah has already visited Washington three times to discuss the war in Syria and the refugee crisis in Jordan, and he regularly meets regional leaders, including Egyptian President Abdel Fattah al-Sisi and Saudi King Salman bin Abdul-Aziz Al Saud. Despite Turkey’s critical role in the Middle East, especially in the ongoing Syrian war, Abdullah has not met with President Recep Tayyip Erdogan in more than three years, since March 6, 2013. What explains the cold relations between the Jordanian and Turkish leaders?

Aykan Erdemir, a former Turkish member of parliament and a senior fellow at the Foundation for Defense of Democracies, told Al-Monitor, “The Jordanian royal family sees Erdogan and the AKP [Justice and Development Party] as first and foremost a Muslim Brotherhood movement. From the Jordanian point of view, this is a problematic relationship.”

Erdogan has repeatedly attacked Sisi, even calling him an illegitimate tyrant following the 2013 overthrow of Ankara ally President Mohammad Morsi of the Muslim Brotherhood. Egypt is one of Jordan’s strongest allies, so the Turkish president’s attacks on Sisi have strained ties with Abdullah. In addition, while Erdogan has strongly supported Hamas, another Brotherhood movement, Abdullah is close to Fatah, Hamas' Palestinian rival. Jordanian leaders regularly meet with Palestinian President Mahmoud Abbas, who also heads Fatah. Erdogan’s support for the Brotherhood not only strikes an ideological nerve in Amman’s foreign policy but also irritates the Jordanian regime domestically.

“The Brotherhood in Jordan represents one of the opposition centers to the king’s power, and Erdogan is one of the sponsors of the Brotherhood in the region, both intellectually and politically,” Soner Cagaptay, director of the Turkish Research Program at the Washington Institute for Near East Policy, told Al-Monitor. Jordan has adopted a series of restrictive measures against the local Muslim Brotherhood over the past year. Of note, on March 29 the government barred the organization from holding internal elections and last year canceled a 70th anniversary rally.

The bad blood between Abdullah and Erdogan runs deeper than ideological divisions. Hassan Momani, professor of international relations at the University of Jordan, told Al-Monitor, “It is clear that t​here is no personal chemistry between King Abdullah and Erdogan.” The two leaders' upbringings differed greatly. While the Jordanian king received his education in England and the United States, Erdogan remained in Turkey and participated in Islamist politics from a relatively young age.

Although Erdogan has been criticized for launching verbal tirades against regional leaders, it has been Jordan’s monarch who has repeatedly attacked the Turkish president. According to a leak reported March 25 in Middle East Eye, Abdullah told US congressional officials during a January visit to Washington, “The fact that terrorists are going to Europe is part of Turkish policy and Turkey keeps on getting a slap on the hand, but they are let off the hook.” Asked whether the Islamic State (IS) was exporting oil to Ankara, Abdullah responded, “Absolutely.” Abdullah’s accusation that Ankara is working with IS likely does not sit well with Erdogan, as Turkey has suffered several horrific attacks by IS of late.

An informed source, who requested anonymity for lack of authorization to speak with the press, told Al-Monitor that ties between Amman and Ankara had reached a “crisis.” Given that the king’s quotes were published right before Turkish Prime Minister Ahmet Davutoglu was scheduled to visit Jordan on March 27, the source wondered whether the timing of the leak had been intentional, to try to sabotage the visit, which had required weeks of planning.

Abdullah’s condemnatory remarks about Erdogan this year were not his first. In April 2013, Abdullah had told Jeffery Goldberg of the Atlantic magazine, “Erdogan once said that democracy for him is a bus ride. ‘Once I get to my stop, I’m getting off.’” In the same interview, Abdullah says he believes Erdogan is not truly committed to democracy and is more interested in promoting Islamism and tightening his grip on power.

Oraib Rantawi, director of the Amman-based Al-Quds Center for Political Studies, reiterated that Ankara’s support for the Muslim Brotherhood extends throughout the region and that this has been a major stumbling block to relations with Jordan. Rantawi told Al-Monitor that over the past several years, since the Arab Spring, “Turkey has found an opportunity to expand its hegemonic role in the whole region, which was against Jordanian interests in general.” This is a view commonly held by Amman elites.

The differing approaches to the five-year Syrian war have also exacerbated relations between the two leaders. Cagaptay explained that while Jordan has placed an emphasis on supporting “moderate” rebels in southern Syria, radical jihadists and IS militants have thrived on Syria’s northern border with Turkey due in part to Ankara’s policies. Summing up Abdullah's position, Cagaptay said, “Turkey has played it wrong by producing — unintended as it might be — policies that have resulted in the rise of radicals in northern Syria.”

Nonetheless, ties between the two countries are not uniformly negative. Trade remains relatively strong, having reached $1 billion. Yet, the ideological clashes over the Muslim Brotherhood, lack of personal chemistry between Erdogan and Abdullah and with conflicting views toward Egypt’s Sisi have ensured that ties between Amman and Ankara remain poor. Given the many regional challenges to both countries bordering Syria, a strong relationship between Abdullah and Erdogan would appear to be beneficial to both sides. But for now, ideology trumps realpolitik.